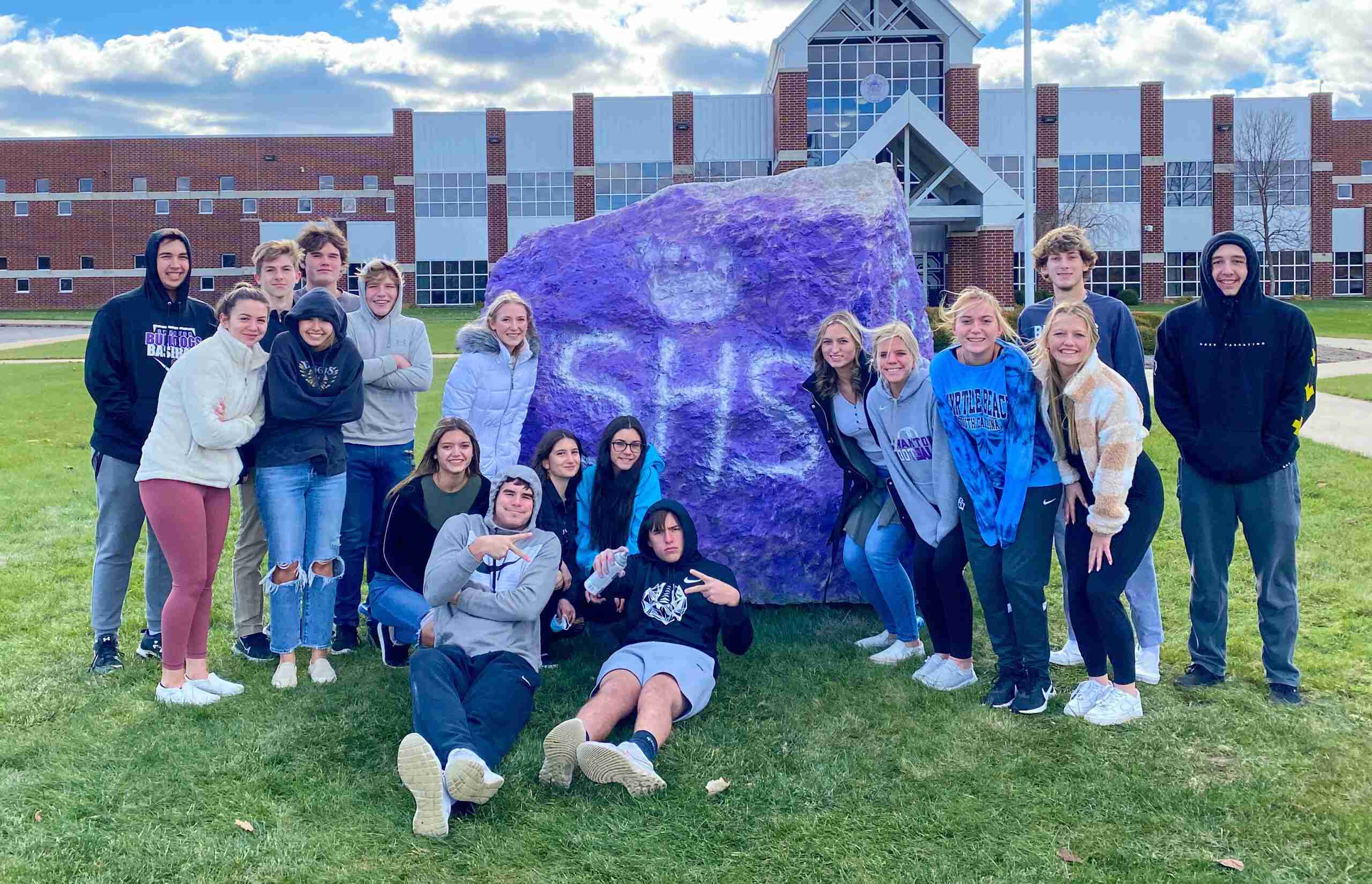 SCHOOL SPIRIT … Leadership students at the Swanton High School stand in front of their new spirit rock after applying the first coat of paint. (PHOTO PROVIDED)

Swanton High School students have a new spirt rock that they can admire. The idea behind the new spirit rock was entirely student driven, with members of the leadership class coming up with the idea.

The students were challenged to come up with ideas of things that they would like to see improved in the school. Fairly quickly, the idea of a new spirit rock moved to the forefront of what the students wanted.

The school did already have a spirit rock though. The issue from students however was that it was a lot smaller than what they would like, and it was not something they felt as proud of.

Mr. Denton Saunders, who is an Intervention Specialist and teacher of the leadership class at Swanton, explained to the students the obstacles they would be facing.

In order to get a new spirit rock, the students would have to find a new one that could be obtained by the school, transported to the school, and placed at the school.

They would also have to receive permission from members of the administration. Even with all these obstacles being faced, the students were able to figure out solutions to these problems within a few days.

Shelly Stone Company in Oregon, Ohio was able to donate the rock for the project. Jennifer Holtsberry, who is a parent for one of the Juniors at Swanton, knows someone at the company and was able to talk to them about donating a rock.

The company also gave some of the students from the leadership class a tour of their facility. There, the students were able to look at four rocks and choose which one they would like for their new spirit rock.

The students decided on a near 7-foot, cube shaped rock that weighs in excess of 42,000 pounds. With a hard part out of the way, the students needed to figure out how to transport the huge rock to the school.

James Warner, who is the friend of a senior student’s mother, offered to transport the rock from the quarry to the school during a time where it was able to fit his schedule.

With yet another obstacle bypassed, it was time to figure out what happens with the rock when it gets to the school. With it weighing over 42,000 pounds, getting it off the truck will take a lot of power.

Matt Taylor, the father of one of the Junior students, had worked with Capital City Group in the past. He was able to talk with the company and have them donate a crane and crew to help with the project.

Capital City sent out Andrew Elford to head up the project and work with Mr. Saunders and school administration to find the best spot for the rock. With everything figured out for the rock and where it would be set, it was time for all the planning and work to pay off.

On Saturday, November 20th the rock was picked up from the quarry by James Warner. He stored it overnight for the students and brought it to the school on the morning of Sunday, November 21st. Capital City, with helpers from Dunbar Mechanical Inc, worked together to with volunteers to set the rock.

That Sunday morning was cold and rainy which did not allow students to paint the rock until the following day. On Monday, the first coat of paint was applied to the rock by the entire leadership class.

The plan is to make the new spirit rock a tradition for senior classes where they can make their mark in the history of the school. It can be a place for pictures and memories.

It will also be painted for games and spirit. The same spirit that was shown in bringing the whole project together since its beginning.