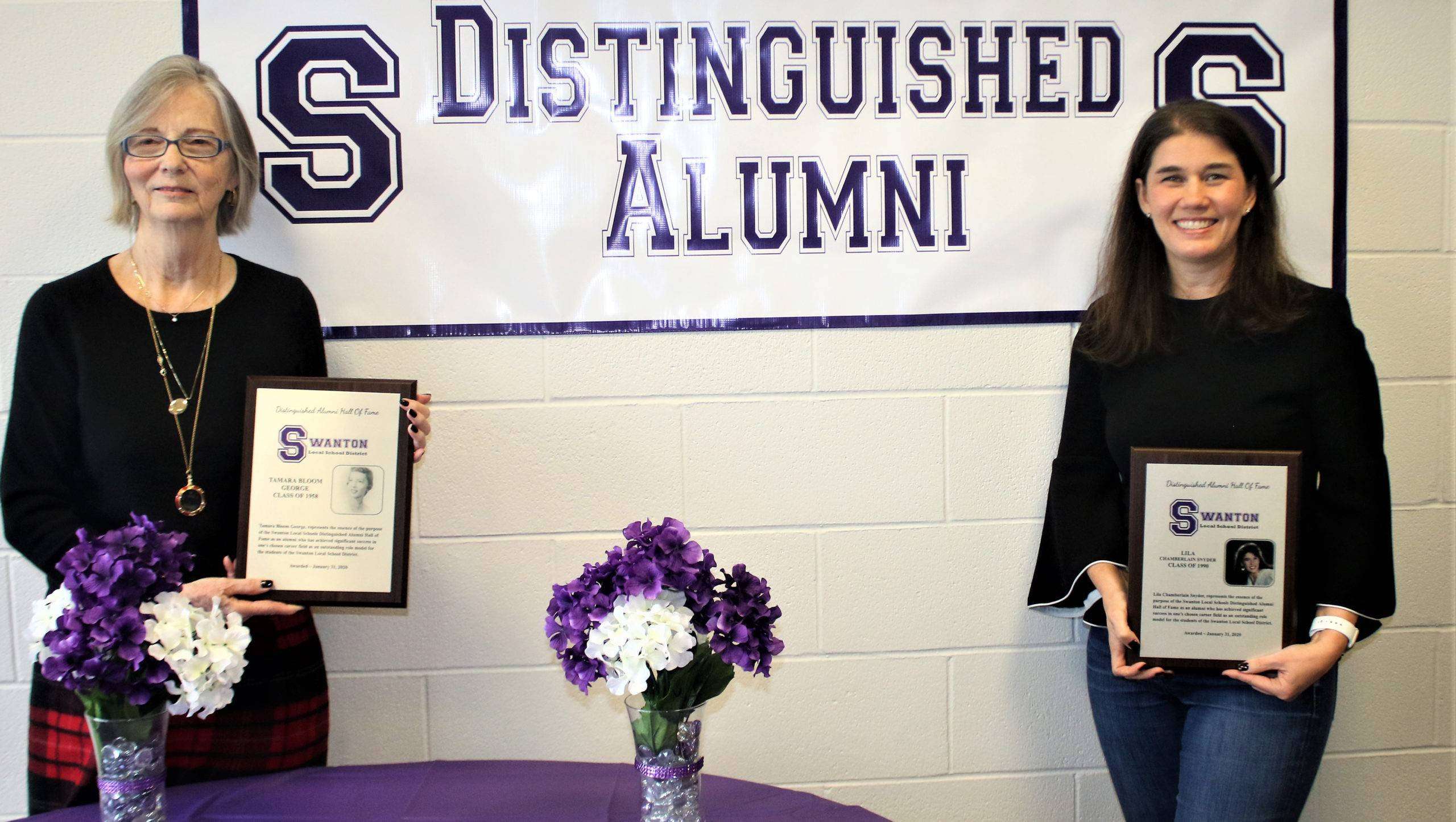 Swanton Local Schools recently inducted two individuals, Tamara Beth Bloom George (’58) and Lila Chamberlain Snyder (’90) into their Class of 2019 Distinguished Alumni Hall of Fame.
Tamara Bloom George was co-valedictorian of the 1958 Swanton High School Class. She is the daughter of Junior Bloom and Audrey (LaPlante) Bloom. Her brother Nile and uncle, Jack Bloom are well known in the Swanton community.

Tamara has devoted her life to the improvement of nursing, particularly mental health care. She received her nursing degree from The Ohio State University and her Masters and Ph.D. in nursing from Wayne State University. She has taught nursing at Hope College, Grand Valley State University, Nazareth College and the University of Michigan.

Tamara is especially proud of the number of nurses she has impacted who are spread all over the country. She has extensive clinical experience in psychiatric and mental health nursing and is the author of a dozen publications dealing with the nursing profession. She has also made two dozen professional presentations, many in Michigan but also in Nassau, Minnesota, North Carolina, Massachusetts and Texas. Tamara is married to Wayne George, a 1957 graduate of Swanton High School. They have two children.

Tamara gave a great deal of credit for her success to the teachers she had at Swanton. “I had great teachers here,” she said, naming a few. “The list goes on and on and they truly helped all of us. They wanted us to do great things and find our passion. I found nursing and once a nurse, always a nurse.”

Lila then attended the Massachusetts Institute of Technology (MIT) in Cambridge. At MIT she worked on tissue engineering and tested an implant for regenerating peripheral nerves after paralyzing injuries. Lila graduated from MIT with a Masters in 1996 and her Ph.D. in 1998, both in Mechanical Engineering.

She joined McKinsey and Company where she became a partner and worked with media and technology companies on a range of issues including strategy, sales, marketing and operations. In 2013 Lila started at Pitney Bowes as President of Document Messaging Technologies and in 2015 became the Executive VP and President of Commerce Services.

In her spare time Lila enjoys traveling and attending her children’s sporting events. She is married to Paul Snyder and has three children, Maya, Liam and Finn. “The most important thing for me in my career, since the beginning, since high school and beyond, has been to take risks,” Lila replied when asked if she had any advice for today’s Swanton students.

“Do things that feel uncomfortable and seem hard and you’re not sure you can do that. Each time you do that you’ll learn a lot, even if you fail. You will learn a lot and it will propel you forward to greater things. I’m a big believer in taking personal risks as you progress to make yourself better and grow as a person.”