Swanton’s Gunnar Oakes Succeeding At The Next Level 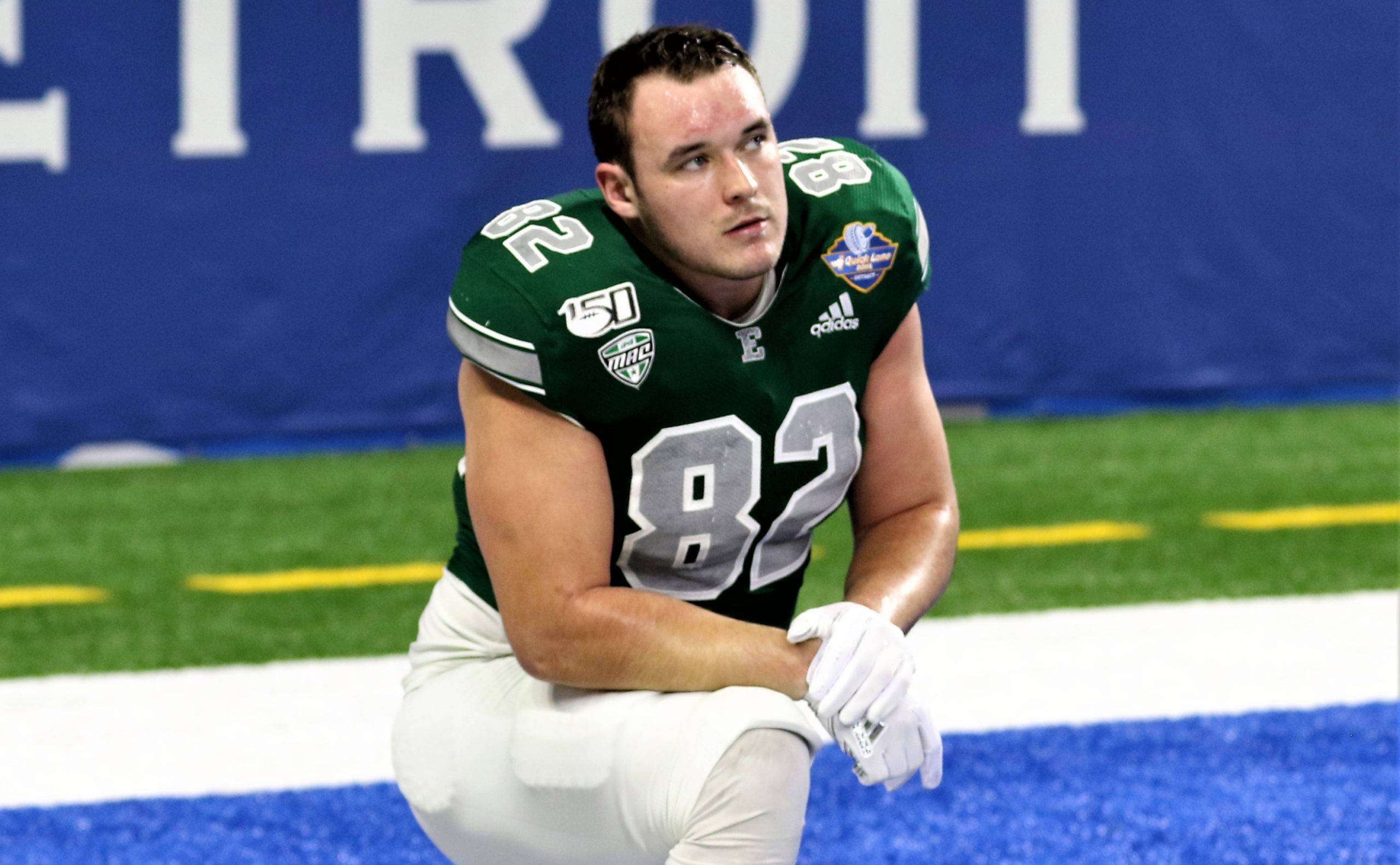 Well over one million high school students play football every year in America. Of that number, less than six percent will play the sport in college and only about a quarter of those will compete at the highest level, Division One.

Gunnar Oakes, Swanton High School Class of 2017, has earned the distinction of playing at that level as a tight end for the Eastern Michigan University (EMU) Eagles of the Mid-American Conference (MAC). He just finished his sophomore season with his EMU teammates playing the University of Pittsburgh Panthers in the Quick Lane Bowl at Detroit’s Ford Field.

In his four years as a Swanton Bulldog athlete, Gunnar built a resume unprecedented in the history of the school and in the annals of the Ohio High School Athletic Association. He produced 15 varsity letters in four sports, football, basketball, baseball and track.

In his senior year, Gunnar received Ohio All-State recognition in all four of those sports. A feat that had never before been accomplished. It was no surprise when major college football programs came calling. After weighing many options, Gunnar chose to play football at EMU, a decision that both he and his parents, Eric and Leslie, believed then and still believe today, was the best.

Very soon after graduation, Gunnar’s journey into the real world began with a series of challenging “Life comes at you fast,” moments. Just one week after his graduation party, in the middle of June, he headed for Yipsilanti, Michigan and the EMU campus to start training for football. It was an eye-opening experience.

“How much faster the game was and just how much training goes into one sport,” replied Gunnar when asked what was the biggest differences between high school and college athletics. “I was used to switching to basketball and to other sports and constantly being focused on football was a big change for me. A lot more hours, a lot more film, thousands of hours of film.”

What came next, however, had a major impact on Gunnar’s psyche, his ego and his confidence. Initially told he would probably see some playing time as a true-freshman, Coach Chris Creighton and his staff decided it would be best if Gunnar would red-shirt his first year with the program. Despite the many benefits of red-shirting for a year such as having more time becoming acclimated with college life, getting physically stronger, thoroughly digesting the playbook and still able to practice with the team, Gunnar did not take the decision well.

“At the time I was pretty upset. Wasn’t really about it,” Gunnar recalled. “Looking back now, I really needed it.” It is almost always difficult for a star high school athlete, especially one from a small town, to deal with the fact that they are no longer naturally head and shoulders above all of their teammates.

In many cases they also carry the weight of expectations, real and imagined, of their family, friends and former classmates to be successful. They believe they are playing not just for themselves but for everyone back home.

Quietly, Gunnar’s parents were hoping he would be red-shirted. “He’s young in age. He needed that extra year,” said Eric. “He didn’t turn 18 until May, the end of his senior year. He needed it,” added Leslie.

For Gunnar and his family, the overall experience has proven to be a cautionary tale for others. “He was upset he wasn’t playing. It was hard for him. Quite honestly. He did struggle with classes his first semester,” said Leslie. “I think being honest about that helps other kids to understand that they are not alone. Every freshman parent I meet I tell them about his experience. If they get red-shirted they could be upset and depressed. It’s an adjustment.”

The following season, as a red-shirt freshman, Gunnar was able to get a lot of playing time and had his first collegiate touchdown, a leaping one-handed grab of a pass in the end zone against Central Michigan, shown on ESPN as the #4 play on their list of top 10 plays of the week.

But also, with that season, came Leslie’s shocking diagnosis of breast cancer, discovered during her first ever mammogram. Thankfully, the disease was in the early stages but it certainly put everything into perspective. For Gunnar, it was a stark reminder that the world around you does not stop while you struggle to get adjusted.

As always, the Swanton community rallied around one of their own to give support to Leslie and the Oakes family and, ironically enough, to one of Leslie’s closet friends, Krista Hendricks who was diagnosed with the same cancer shortly after Leslie and whose daughter Ally had dated Gunnar all through high school. Not only was Swanton there for the Oakes’, so was Coach Creighton and the EMU football team.

“Coach Creighton called me right away, himself, to tell me, ‘We got your kid. Take care of you,’” said Leslie relating some of the direct and caring support she received from the university. During her treatment, Coach Creighton invited her to team meetings and had her address the team prior to the Eagles taking the field against the Black Knights of Army.

He actually had Leslie lead the team onto the field for warm-ups carrying the 51-pound wrench EMU uses to symbolize their mission to close the gap between their current status and their potential. It was another difficult year for Gunnar but with the help of friends, family and the football team he was able to persevere.

Fast forwarding through Gunnar’s second year on the field, his life has calmed down tremendously and he has a better understanding and appreciation for the opportunities he has been given and the experiences he has been part of. Leslie and Krista have both completed their cancer treatments and are doing well.

Gunnar has been able to travel all across the country from California to South Carolina to Alabama while contributing the success of the Eagles football team. The day after Christmas, EMU played against the Pitt Panthers of the Atlantic Coast Conference (ACC) in the Quick Lane Bowl at the home of the Detroit Lions, Ford Field.

Coming in as double-digit underdogs, the Eagles lost a 34-30 heartbreaker when Pitt scored with less than a minute remaining in the game. It was a tough way to end the season but given what Gunnar has gone through the past three years, it allowed him to accept the disappointment much easier.

With two more years of football eligibility left, Gunnar’s focus will shift slightly to become more of a pass-receiving tight end. His coaches have asked him to shed some weight from his 6’5” 252 lb. frame and work on improving his speed. Gunnar is majoring in criminology with a minor in sociology and is planning on working as a law enforcement officer after graduation.

Obviously, no one knows what life has in store for Gunnar and his family in the next two years but, whatever that may be and however fast it comes, he will be far better prepared to tackle any adversity that comes with it. Life may have come at Gunnar fast, but he has shown to be a quick study.