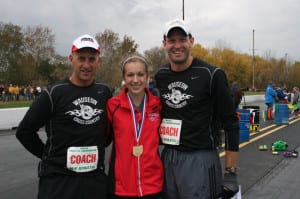 Facing their toughest test of the 2013 season, the Lady Indians were in the field facing 15 state-ranked teams. The October 31 OATCCC poll found the Lady Indians finally getting some respect as they moved up to #7 in the polls. The top five teams all finished ahead of the Tribe in Columbus, but the Lady Lumberjacks of Oakwood, ranked #6 and led by defending D-II State Champion Mary Kate Vaughn, fell to the eighth place team finish. Vaughn and Wauseon’s own Taylor Vernot were involved in a battle for the front of the pack for the entire race. At the end though, when the time came to shift it into high gear, Vaughn found herself with clutch problems. Vernot found her overdrive though, overtook Vaughn, and captured the D-II Individual Championship by 5.3 seconds over Vaughn, and 16.9 seconds over the third place finisher.

At the end of the first mile, Vaughn had a 0.4 second lead over Allison Sinning of Tippecanoe for first place, with Hannah Campbell of Caledonia River Valley in third by 0.1 seconds, and Vernot in fourth, 0.2 seconds behind Campbell. The conditioning of Vernot began to come to the fore in the second mile as Vernot overtook Campbell for third place, 0.9 seconds behind first place Vaughn, and 0.6 seconds in back of Sinning.

In the final mile, Vernot found her overdrive with a third mile time of 5:49.1, her best one-mile timing since she clocked 5:41.6 in mile one. Sinning fell off the mark by 4.2 seconds compared to her mile two timing. Sinning fell into third place, leaving Vaughn and Vernot vying for the gold. After posting a 5:40.9 in the first mile and 5:50.0 in the second, Vaughn could not maintain the pace of Vernot who grew stronger as the race neared its end. At the finish line, Vernot was the only member of the top four finishers that was able to regain a speed of under 5:50. The conditioning, determination and skill of Taylor Vernot was the key to her finally passing Vaughn in the final leg of the race, never looking back on her way to becoming the new Division-II State Champion. Her final time of 18:04.40 was the fastest registered by any girl, Divisions I, II or III, at the 2013 State Finals.

“I still can’t believe it,” said the newly crowned champ. “Coming into the race this year, I felt more confident since this was my third trip down, and I knew exactly what to expect. I knew one of the most important things to do in order to have a good shot at placing in the top few was to get out fast right away, and stick on the lead pack for as long as possible, and I think I did just that. My start was the best start I’ve had at the state meet, and right away I was side by side with the leaders.”

“Our little pack stuck pretty close together through the two-mile mark,” Vernot continued, “..and then it started to get tough. One by one the other girls drifted off, but I was still fairly close to Mary Kate Vaughn in front of me, the defending state champion. With about half a mile to go, I was right up next to her, and I began to try to pass her, but she wasn’t going down without a fight. We hit the long home stretch and I was even closer yet to her. At that point I thought to myself, ‘This is the closest chance I will ever have to win a state title; I have to do this.’”

“It felt like I was sprinting faster than I’d ever gone before, but I felt strong,” she recalled. “The finish line was approaching quickly, and I made my move around Mary Kate, still surprised that she hadn’t begun her own kick to the finish. When I passed her, and she didn’t respond and I heard the screaming crowd, it was then that I realized I was going to win it. I gave it all that I had, and the feeling when I crossed the line first was unbelievable. I never, ever thought that I would win the state meet, but I know that all of my hard work paid off in that moment. This is truly a blessing, and I am so thankful for everybody that had a part of it. Not many people can say they’ve ran at the state meet, but then to win it? That’s something I will never forget.”

Neither will Wauseon High School, Taylor…not by a long shot.

The following Wauseon finishes were recorded by place and time…