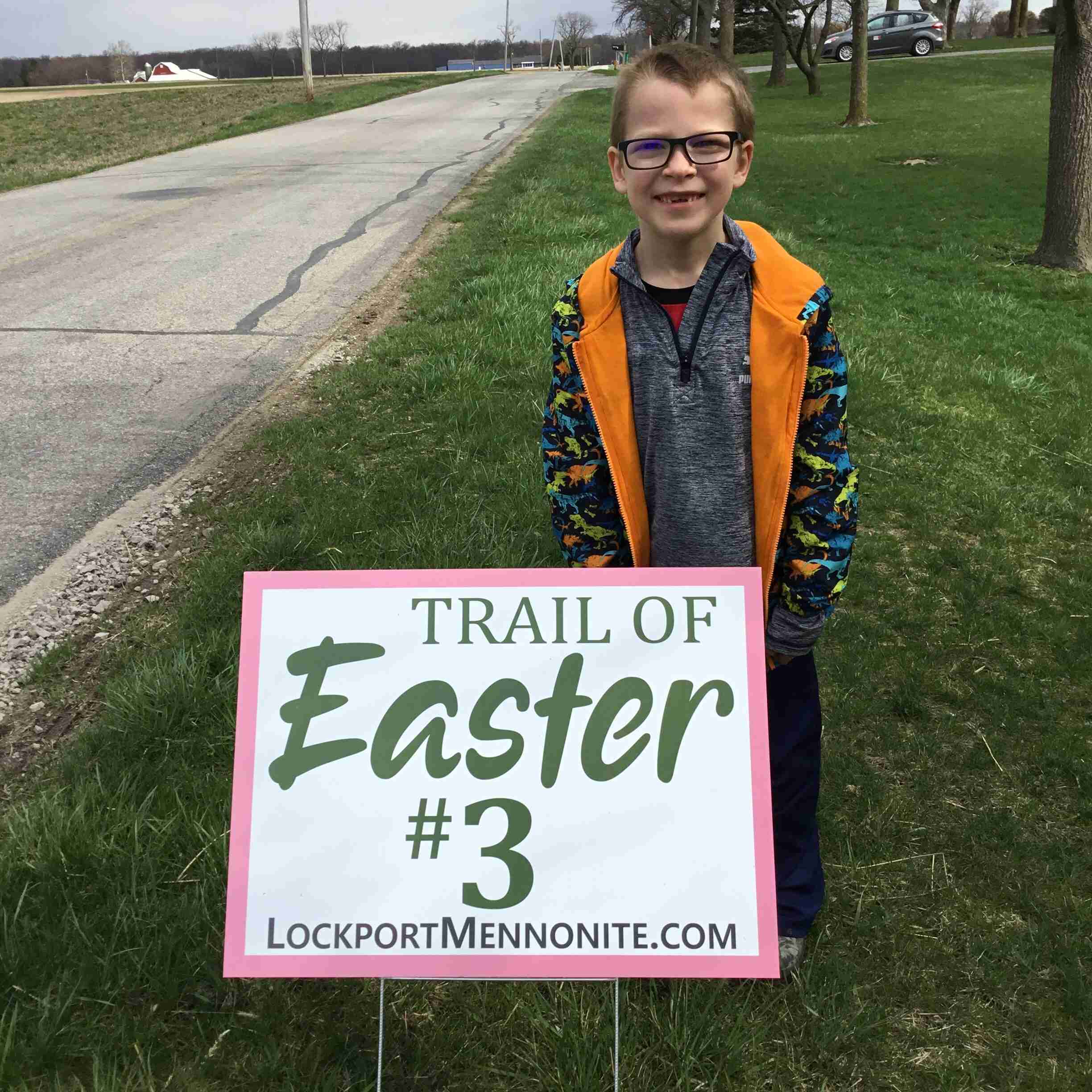 LOVED BY ALL AGES … Seven-year-old Kade Miller thought The Trail of Easter was a fun scavenger hunt. Others in the vehicle, who were much older, enjoyed it just as much as he did. It brought generations together in conversation over what Jesus did for all of us. Each participating house was well marked with a sign like this one. (PHOTOS BY REBECCA MILLER, STAFF)

For the second year, the Trail of Easter was held in the Lockport area of Fulton and Williams County. Everyone was invited to take a driving tour of this visual opportunity to relate to the Easter account from the Bible.

Nine homes and Lockport Mennonite Church participated by putting items out in their yards for the viewers to hunt for and find as they drove by, or slowed down, or even stopped to look around.

The items were all connected to scripture verses which were printed on a flyer that was disseminated into the community via the newspaper and was even put on FB.

A map of the Trail was included, with visitors starting at 3768 FC County Road 25 and ending at Lockport church.

Such a fun time it was to follow the signs that directed the drivers to each of the houses, after beginning at the first one, to see if you could find all of the items listed for each home.

This year there were only a few that were not found by the writer and family. It helps to have a car full of people as more eyes makes it into a great game of who can find them first, and especially when they are small or hard to see.

The three not found this year were the “sword” at House #4, “imprint of a kiss” at House #5, and the Spear at House #8. All the rest of the 36 items were found and were so well representative of the items from the Easter Account.

Some of the items were the Crown of Thorns, a blindfold, a set of Guard’s Armor, Hands in Prayer, the Passover Meal table, spices, the spike or nail, sponge and vinegar, a staff, a wooden cross, strips of linen for burial, and shiny metal circles hanging in a tree that sparkled as they waved in the wind to represent the thirty pieces of silver that Judas was given to betray Jesus.

We take you now on a much-shortened pictorial tour of this terrific new Easter event in the area, but highly recommend that families or individuals not miss it next year.

It is even more special when shared with others so take along at least one friend to share the joy of the hunt and the spiritual refreshment that it will bring to everyone who goes. 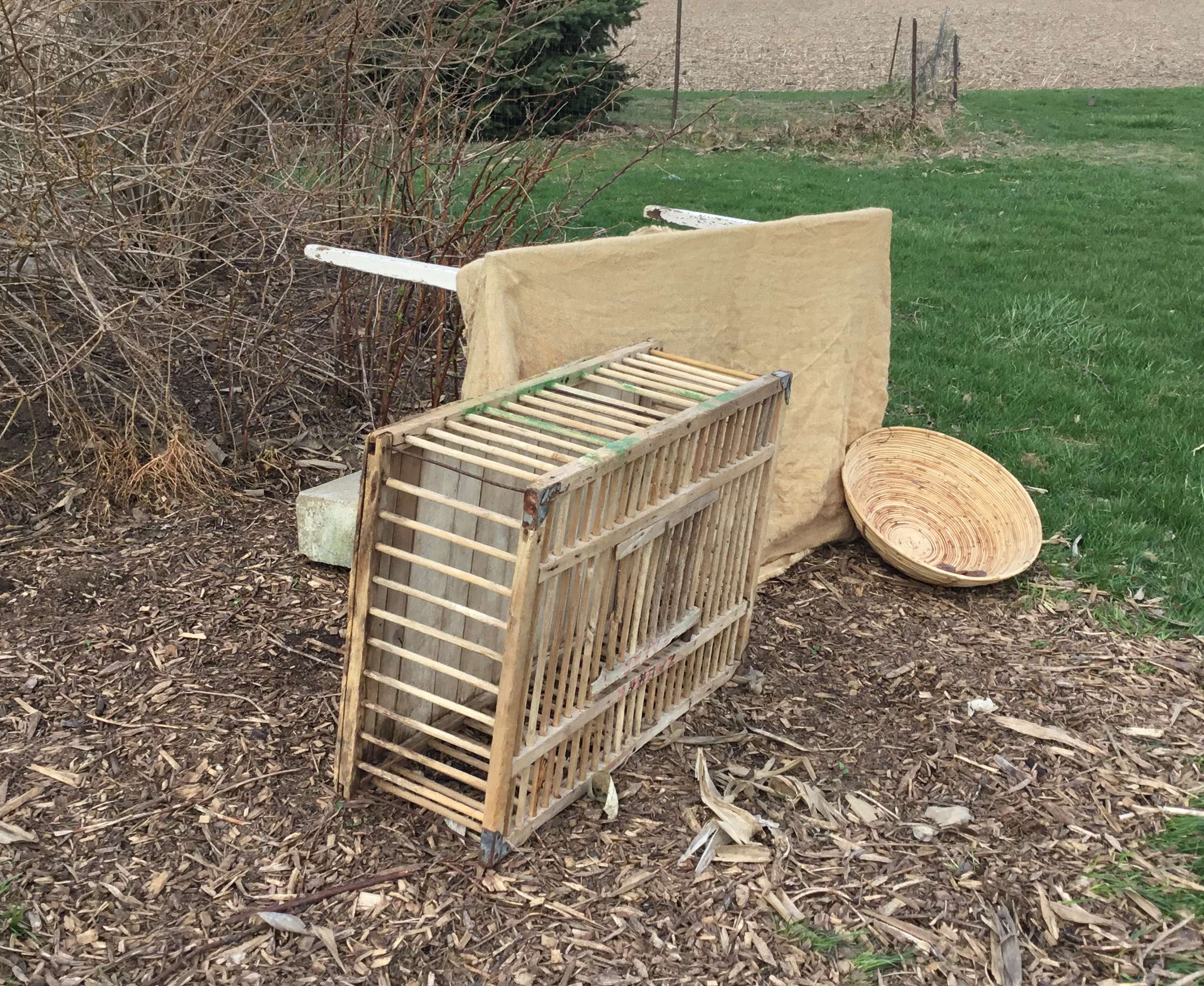 MONEY CHANGERS’ TABLE AND DOVE CAGE … During the week before the death and resurrection of Jesus, he still had some things to accomplish. One was to clean out “His Father’s house” which he did, as he angrily turned over the tables of the cashiers in the temple and freed the animals and doves which were there to be sold for sacrifices. This excellent representation of that moment was found at house #2. 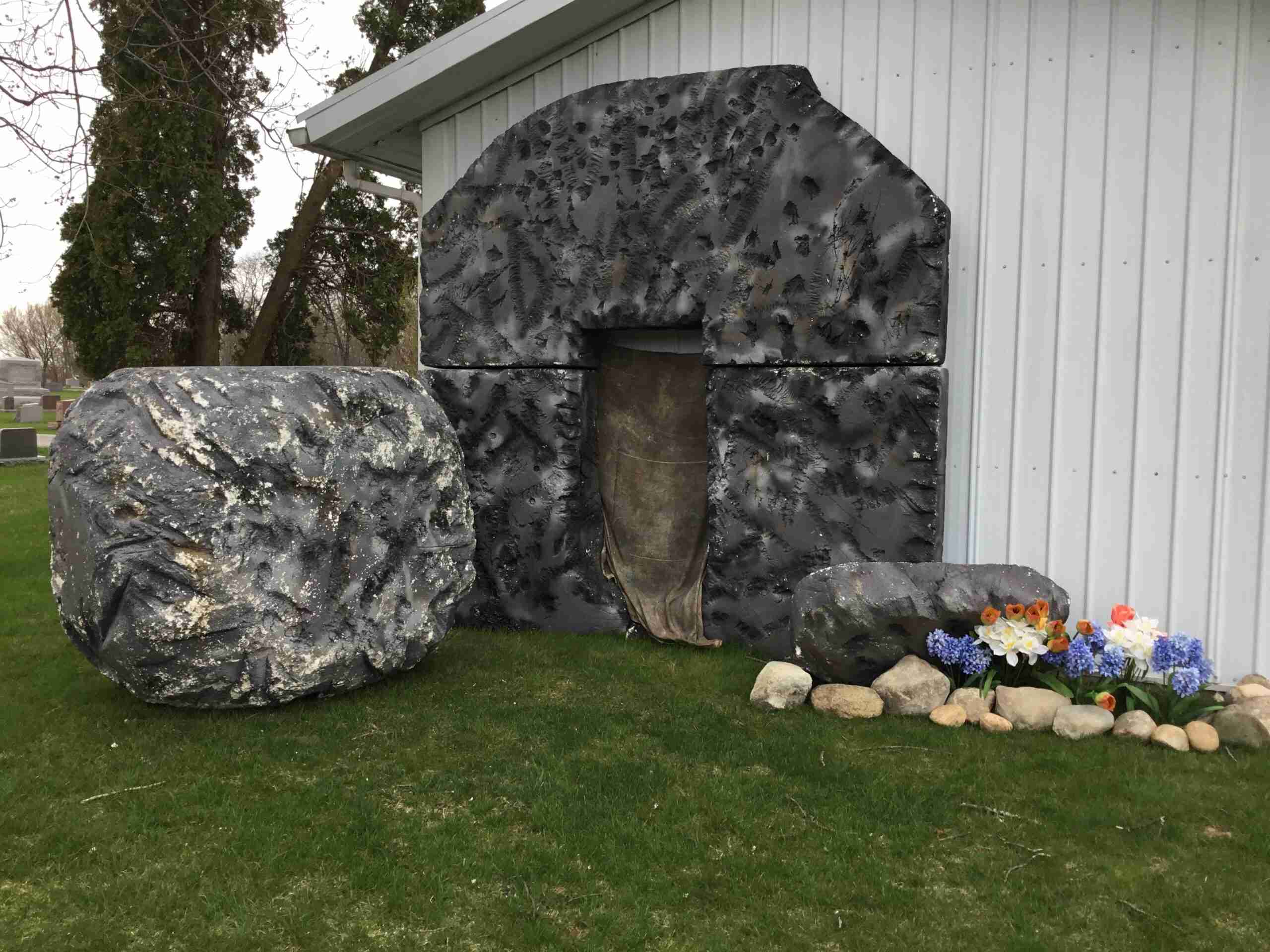 THE EMPTY TOMB … ”He is Risen!” “He is Risen Indeed!” This declaration made throughout the history of the Church for the past 2000 years, the empty tomb brings joy and reminds us all that Jesus did not stay dead. “He is risen just as he said.”