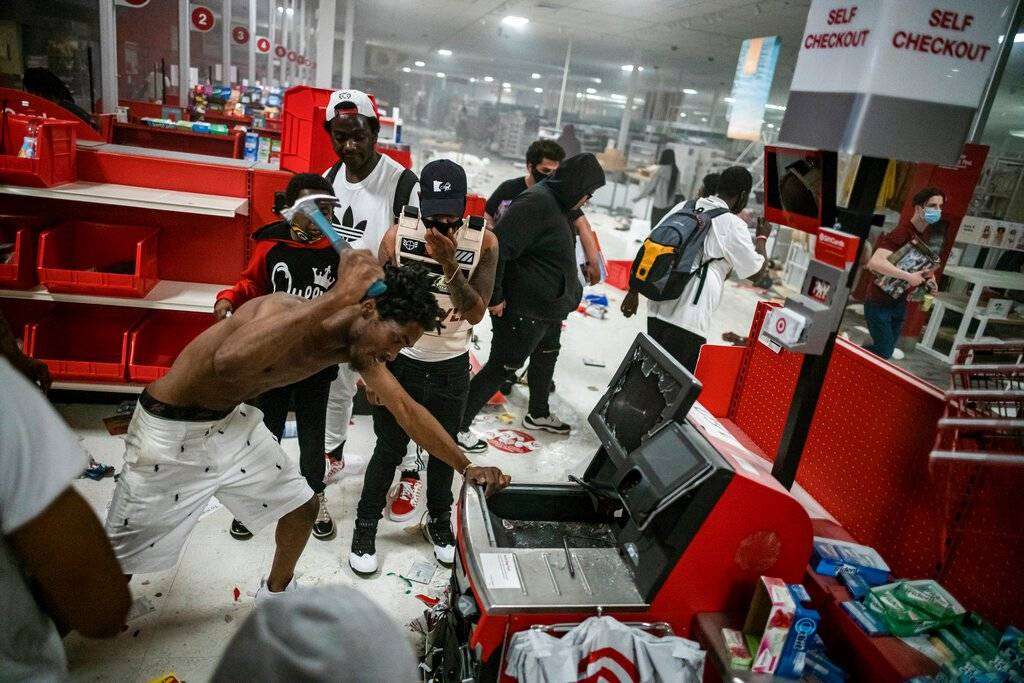 In this Wednesday, May 27, 2020 photo, a looter uses a claw hammer as he tries to break in to a cash register at a Target store in Minneapolis. Rioters ignited fires and looted stores all over the city, as peaceful protests turned increasingly violent in the aftermath of the death of George Floyd. (Richard Tsong-Taatarii/Star Tribune via AP)

Question: During last week’s riots there were several instances where business owners defended their places of business with firearms when rioters used force to break into their establishments. Do you believe business owners should use such force to protect property and/or employees from those looting?

–(Reply): Jim – When a criminal knows a business or home is protected by someone armed, it is proven they are less likely to go into those places to begin with, so the the “threat” of “paying” for your crime does work.

Linda – Again, loaded question. One can never assume that those breaking into an occupied business will only steal and not commit bodily harm as well.

Matthew – No. We have a judicial system for a reason. You don’t just get to murder people, no matter what the reason.

Joseph – We have a right to defend family and property that was part of the entire purpose behind the 2a…I don’t want an human life to be taken, but when I clear threat is before me I will defend what is mine. If you don’t like this approach them maybe you should find a way to stop the violent rioting. I’m all for a peaceful protest and yes they are righteous and needed, but once you pick up a brick it’s all over.

Dan – The huge point a lot of people skip is the rioters are commiting a criminal act, and looting use to be shoot on site! I can promise one thing, if a person is breaking into my home or business, I don’t care the age, I don’t care if they’re armed, force will be used!

Jeff – They’re given no choice, since the elected officials sworn to keep the peace and enforce the law are more worried about what kind of label is put on them for not being subservient to the “cause”. Voters should show strong in November, this lawlessness has to stop!

Brice – A much better question would be ” Is it lawful and a right to shoot an unarmed person stealing property out of your unattached garage or barn”? Pretty much the same principle applies in both scenarios.

–(Reply): Jeff – Except that is their livelihood instead of their garden tools! That’s how they feed their families!!

–(Reply): Brice – I had 40K worth of tools that were my livelihood before I retired and a bike and rider stolen from an unattached garage 2 summers back. I never had the mindset that I should kill the thieves. I was angry. My point was that it is unlawful to shoot someone unless they are perceived as being a threat. If Ohio changes the statute that a homeowner can shoot a thief caught in the act, then that is the law. When business owners are allowed to shoot thieves and would be thieves or someone just in the wrong place at the wrong time, grave mistakes occur. I do see your point of view.

–(Reply): Jeff – So how does a business owner protect his business, which he usually has all his savings and a lifetime invested in? It seems the people in charge of that don’t care about his rights anymore.

Stephany – Yep. Arm everyone. I’m not a fan of violence, but I am armed because that’s what our society has come to now. I just wish everyone understood and followed the Use of Force Continuum.

Andrea – During an armed robbery my great aunt Kathleen was kidnapped from the econolodge in holiday city. She knew one of the robbers. So they murdered her and dumped her off the side of the road like garbage. Thankfully they both are in prison. So they can’t hurt anyone else. I don’t care if you work at a hotel, circle k, the pharmacy. I’m always quick to say it when a robbery happens around here. I’ll always support your right to defend yourself with a firearm. Nobody should have to go through what our family went through. Do what you have to do so you get home to your loved ones safe ❤

–(Reply): Kelly – I remember when this happened!! So sorry for what you and your family went through!!

–(Reply): Sally – so sorry you & your family went thru all that.

–(Reply): Laurie – I also remember that so sorry as well.

Be the first to comment on "The Village Reporter – Online Survey: 96% Feel Business Owners Should Be Able To Protect Property / Life During Violent Riots"