WAUSEON BOARD OF EDUCATION: School Board Hears District Report Card 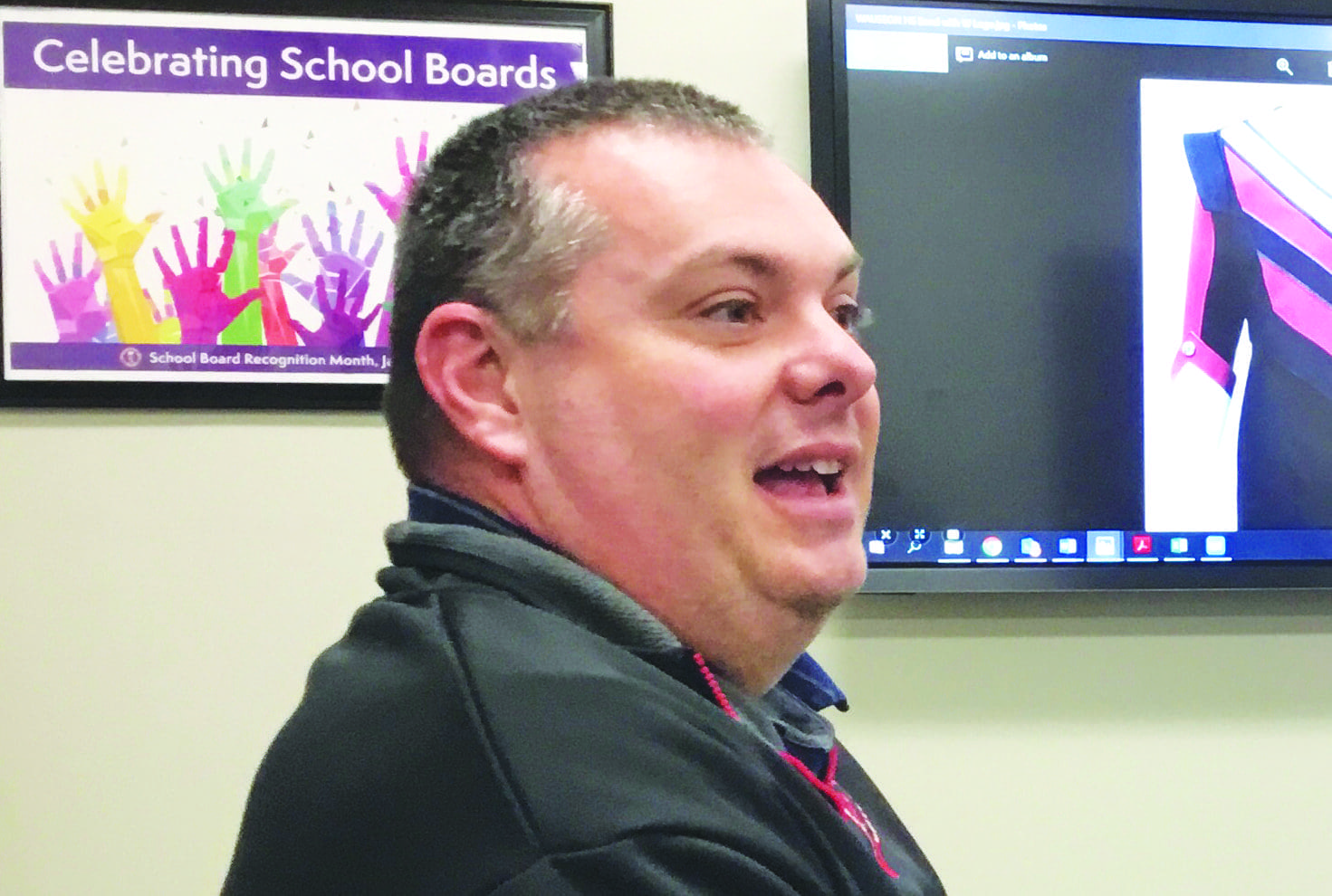 NEW UNIFORMS … Wauseon Music Boosters have donated $38,135 for new band uniforms. Boosters member Luke Ankney was present at the January 9, 2023 school board meeting to share the news and picture of the uniform with board members. (PHOTO BY REBECCA MILLER, STAFF)

Wauseon School Board held the yearly organizational meeting prior to the regular monthly meeting on January 9, 2023, electing Amy Fisher as president and Larry Fruth as vice-president for the year.

Other organizational items that were determined included:

There was some discussion with Superintendent Troy Armstrong and the treasurer explaining that this was recognized as a need when they had the pool heater issue and needed to act quickly.

It was further clarified that $50,000 is the amount that can be spent without putting out for bids.

The board ended the organizational meeting at 5:50 and moved directly into the regular monthly meeting. Luke Ankney, from the music boosters spoke with the board about the new marching band uniforms that are being made.

The music boosters were able to raise and donate $38,135 to the school for the purchase of badly needed new uniforms, the ones in use being twenty-one-years old.

Ankney said that the old ones are being held together with “bobby pins, safety pins and stuff on Friday nights.”

He explained the new uniforms using a couple pictures that Armstrong put up on the screen. The new ones will have the “W” embroidered on them now, instead of the students wearing a “W” pin on the lapel.

They are machine washable uniforms, colorful, have removable gauntlet sleeves, and will still be worn with white gloves.

The hat will have a wraparound that is interchangeable if they want to have something different for specific shows.

The field commander/drum major’s uniform has some color reversal to help them to stand out.

Ankney said that when they decided this is a need, not a want, for the school district, they really went to work on raising the funds and they are very happy to be able to do this for the students and for the district.

The 75 uniforms and two field commander uniforms will come with garment bags. The boosters are discussing the purchase of a rolling uniform rack so that students don’t need to wear the uniforms on the bus, and the purchase of raincoats for them in the future.

The students have all gotten to see the uniforms and are excited about them. The board thanked the boosters for their hard work and generous gift to the district.

The next report was for the District Report Card, and was presented by Director of Instructional Services, Michelle Leatherman.

Prior to 2022, the system had six components with an overall rating, using letter grades (A-F).

After 2022, they have switched to the use of one through five stars instead of the letter grades.

Details can be seen at the Report Card Resources webpage, by selecting the Resources and Technical Documents button.

College, Career, Workforce and Military Readiness is so new that they will not start putting stars with this component until 2024.

Leatherman explained that they do not have enough data to factor it yet.

Superintendent Armstrong shared his frustration that even though the state is pushing schools to make sure that every student has chosen to prepare to move into one of these four areas after graduation, the state seems to only be concerned about college.

The discussion that followed included the thought that all four areas are important and there should not be the same requirements for all students with things such as taking the ACT.

Armstrong is hoping that the state will begin to spread their reporting more across the board instead of just on those who go to college after school.

He hopes to see an “intentional shift” in the way this is measured in the future.

Leatherman pointed out that for Achievement, Wauseon is higher than the state average in every category.

She and Armstrong both spoke about how great it is that they got 5 stars in Gap Closing, which shows that their district is working hard to make sure that every student is growing, not just certain small groups of students.

Five stars is excellent, 4 exceeds state averages, 3 met state standards, 2 is less than state averages and 1 star means there is a real need to improve.

The board thanked Leatherman for her report and said that it was “very comprehensive.”

Jill Shehorn, Transportation Supervisor, gave a thorough report on the condition of the district buses and shared her hopes for the future with the board.

She had a “bucket list” with the top of the list being a flushable restroom for the bus drivers.

“Using that port-a-john in the winter is freezing, and in the summer, it is miserable,” she said.

Full-time bus driver spots are filled but they are still looking for sub bus drivers.

They have three bus aides, a mechanic in her, and their greatest addition this year was adding the cameras on the bus. “It has been a great help,” she said.

Over 400 coats were collected in a Coat Drive which was done by the bus drivers. Many have been distributed and there are some at the schools for needs to be immediately filled.

She said she is very proud of her bus drivers and their efforts. Presently the district has fourteen bus drivers.

The fleet is in dire need of an update as many of the buses are in constant need of repair.

She shared that it is impossible to get new buses or vans presently but they still need to be working on getting them somehow.

They do have four new buses coming, but it is still going to be over April before they arrive, even though they were supposed to arrive in December ‘22.

She highly recommends that they get a system of rotation going so that replacements are kept up. The newest van is 12 years old.

One has 181,000 miles on it, one has no power windows and they are supposed to put the passenger window down at railroad tracks which is hard when the driver is alone.

Another thing on her list of wants is a bus garage. She showed a picture of one she has seen and expressed how important it is to get the buses under cover to help them last longer and to be a safer place for the drivers.

Also in her report, she shared that they still have hand sanitizer at the door on each bus, the drivers always check their bus from back to front to make sure all children are off the bus and assured everyone that that drivers always make certain that every child arrives home safely. The board thanked her for her report.

January is School Board Appreciation Month and Mr. Armstrong presented the board members with Certificates of Appreciation.

He and Mr. Kahmann shook hands with each one and thanked them for their service to the district.

A dinner was mentioned which was scheduled to be held at Sullivan’s for the members and their spouses. Armstrong said,

“We want to take time to formally recognize you as citizen servants, which is what you are.

Speaking on behalf of the administrative team and all employees, we appreciate what you do on a regular basis.”

He mentioned how they handle all the “encounters” they have with citizens as well as their faithfulness at the meetings, “without ever tooting their own horns.

A strategic planning discussion, with the SP team, is scheduled for January 20, 2023, from 9:30-2:30 in the conference room between elementary and middle schools.

Dr. Harvin and two students from Penn State will be there to help them build their platform on “Building a Mission, a Vision, and Goals.” There will be around twenty present for that meeting.

In the treasurer’s report, Mr. Kahmann shared and received approval/acceptance for the following:

Mr. Armstrong shared copies of a letter from the Ohio Department of Education, which was legislatively required to be mailed to them.

It was a copy of the OBOE’s resolution not to support the bill which will require gender identity as a protected class under ADA.

There was no action needed, but he wanted the board to know that if the federal government requires it, the Ohio Board will not support that.

He then stated that if that happens, as it is a federal initiative and the school receives title funding, Wauseon will have to follow the federal government guidelines because they will not be able to get the approximately $250,000 of federal money which they receive, if they do not.

There was no discussion at that time and Armstrong moved on to personnel items. His requests for personnel were approved, as the following items:

The revised 2023-24 school calendar was discussed and approved as well, with some of the changes being the school start dates being moved to August 21, 2023 and the Spring Break dates being moved to March 29-April 5, 2024 to include Easter during the break. There were other smaller changes also.

A motion was made and approved for a revision in the “WHS Graduation Requirements for the Class of 2026 and beyond to reduce electives by .5 credits and include .5 credits of Financial Literacy.”

With no further business, the board moved into executive session at 7:28 p.m. for consideration of the employment of an employee. There was no action taken.

The February meeting will be held on Friday, February 3, 2023 at 1 p.m. at the Wauseon Elementary School.