Alaska, a distant destination most people journey only by luxury cruise ship, is at the heart of the most unlikely of events for one Wauseon couple. Cathy and Kevin Mielke had already raised two daughters when teenage son Jonathon suggested they adopt a recently orphaned family member, Rebecca, 9, in Alaska. In February 2009, the Mielkes began the adoption process, took all the required classes, and filed the petition to adopt Rebecca. Because of Rebecca’s Eskimo heritage and a clause that stated she must stay in Alaska, their petition was denied. A few days after another family member came forward to adopt Rebecca, the Mielkes received a phone call from the social worker. Would they consider opening their home to another young girl from Ketchikan, Alaska who needed a family? She encouraged the couple to check out the adoption website. They did, but with reservations having had no intention to adopt a non-related child. 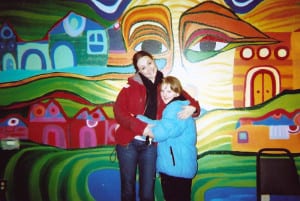 FRIEND FOR LIFE … Chrystal with Afton, her Community Connection After School mentor in Alaska.

The child whose photo stared back at them on the computer screen was a child who had known more heartbreak in her short life than anyone person should ever endure. Chrystal, the youngest of 8 children, had like her siblings, knew a life only of abuse, heartbreak, and neglect. By the age of three, she had resided in 10 different foster homes. In only a few more years, the number grew to 23 homes along with 2 failed adoptions. Chrystal also did not attend school until fourth grade and was unable to read. In the winter of 2009, Chrystal turned to the only person she had any glimmer of hope in, Santa Claus, and asked him for only one thing-a loving, forever family.

Meanwhile, in Ohio, after Rebecca’s failed adoption attempt, the Mielkes continued their lives with work, church functions, and their son’s activities. Cathy, their daughter Rachel, and a nephew drove to her son’s speech tournament near Columbus to serve as volunteer judges. Kevin, who needed to stay behind in Wauseon, seized the beautiful fall day as a chance to take a nature walk and connect with God. While sitting on a bench, he questioned God what they should do about the little girl miles across the US. He felt the calling in his heart to adopt this little girl and immediately called his wife, who was driving home from the speech tournament. She agreed. Shortly after the phone call, Cathy’s life forever changed. A woman high on narcotics driving the wrong direction hit their car head-on resulting in an impact of a combined 100 miles an hour. All three in her car survived but with injuries. Cathy’s ankles and left heel were affected. Three surgeries later, she was told she may never walk again.

Cathy returned home to a hospital bed in her living room. For six months, she healed and followed doctor orders of non-weight bearing status. Her Pastor Tim Sonnenberg visited. She said he questioned her, asking what she was going to do now. She said, “I told him, heal.” He looked at her matter of factly and told her that maybe she was meant to do something else, too. She took this to heart and having a concern for helping people with substance abuse, she joined the community volunteer task force. When she felt ready to resume her work as a school teacher at Pettisville, she tried to return in a wheelchair. It wasn’t working. She realized her course in life was forever changed.

The couple decided to make something positive out of the situation. Cathy says, “I don’t think God made anything happen but he took something and used it for something good.” The couple contacted the social worker in Alaska and went forth with the adoption. Santa Claus appeared at Chrystal’s school with the news for Chrystal along with a family photo album from the Mielkes. Chrystal shares, “Santa told me, ‘I made it happen’.” 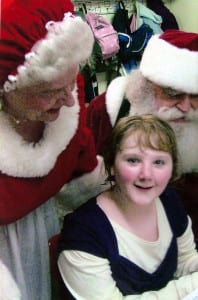 SURPRISE OF HER LIFE … Chrystal reacts when Santa & Mrs. Claus tell her that she had a new family.

The Mielkes met with Chrystal in February 2010 and by April 1, she was in her new home in Wauseon. For the first year, she attended Elm Street Elementary. Despite telling principle Mr. Burkholder that she hated to read, by the end of the year, she had earned a reading award. Middle school with classroom changes was overwhelming to Chrystal, so Cathy chose to homeschool her for 3 years.

Adoption, a blessed union of children and families, comes with a period of adjustment and emotional healing for children. As Chrystal learned what living in a family entails, her emotional issues surfaced. For Chrystal the years of abuse and neglect in Alaska have left her to deal with multiple issues. Initially, she had difficulty trusting adults, a direct result of having had to look after herself for years. The Mielkes knew that Chrystal suffered from Reactive Attachment disorder, a condition resulting from the basic needs of comfort, affection, and nurturing not being met in early childhood. They now know that Chrystal also suffers from Post-Traumatic Stress Disorder (PTSD), Sensory Processing Disorder, and static encephalopathy. The neglect from her biological mother began prenatally and has caused injury to her brain. She was likely exposed to alcohol during her mother’s pregnancy. Her body lacks the ability to regulate her body temperature resulting her often becoming over-heated. Chrystal also has painful flashbacks of the abuse experiences.

Yet despite all these issues, Chrystal is not someone who is limiting her future by her past. Surrounded by friends and family who love her, Chrystal is a happy young teen girl. Of her daughter, Cathy says, “In my opinion, she is the strongest person I know in my life because she can emerge from this and function. For 10 years, she didn’t have anything, no human connections.”

Chrystal is a thriving young teen who attends New Horizons Academy in Wauseon. The school offers a holistic education for children with special learning needs. Chrystal likes that when her schoolwork is done she can read. She has become an avid reader of mythology. She likes some of the art projects but not the clay-“it’s slimy!” Chrystal enjoys horses and loves the 4 dogs and 2 cats that live in her home. Someday, she hopes to work with animals, maybe training therapy dogs or with a laugh, she suggests, pot-bellied pigs. Although her parents take in rescue dogs, she hasn’t convinced them of her pot-bellied pig idea. When asked what the best part of having a family is, Chrystal thinks for a moment and replies in this order, “Animals, Mom, Dad, having an iPad, clothes, books, and shelter!” 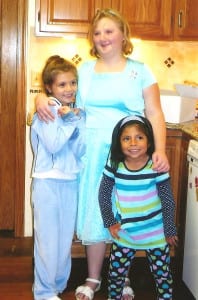 To help Chrystal achieve not only her dreams of working with animals but of learning to cope with and overcome her multiple issues, her parents desire to do everything they can to help her succeed in life. The family is turning towards Sara’s Garden in Wauseon. Hyperbaric oxygen treatments have been proven to be very successful in treating people who suffer from PTSD and other trauma tic brain injuries. Often, it has helped improve the client’s fine and gross motor skills, speech, cognition, memory, and can reverse the affects from fetal alcohol exposure-all things that Chrystal has struggled with.

Unfortunately, in the United States, insurance companies do not recognize hyperbaric oxygen treatments as therapeutic treatments for PTSD and traumatic brain injuries and do not cover the cost of treatments. Chrystal needs several consecutive treatments which the Mielkes hope to do over Christmas break. Each treatment is only $110, but this expense will quickly add up. The family has set up a contribution page on Sara’s Garden’s website. Sara’s Garden is a 501(c)(3) non-profit facility so all gifts are tax-deductible. Checks can be written out with Chrystal’s name on an accompanying sheet of paper (not on the check) or online at http://SarasGarden.org/ChrystalMielke/

Cathy isn’t sure where the money will come from for the treatments, but she says, “If you truly believe, God takes care of you. Chrystal’s adoption has been a blessing to our family, she loves now, she loves people.” This smiling, girl with a contagious laugh refuses to let her struggles hold her back. With the love and support of her family, friends, and community, and hyperbaric oxygen therapy, Chrystal’s future is bright. The family would like to thank the community for their donations. Any size is appreciated. For more information about hyperbaric oxygen treatments and Chrystal’s story, you may contact Sara’s Garden.