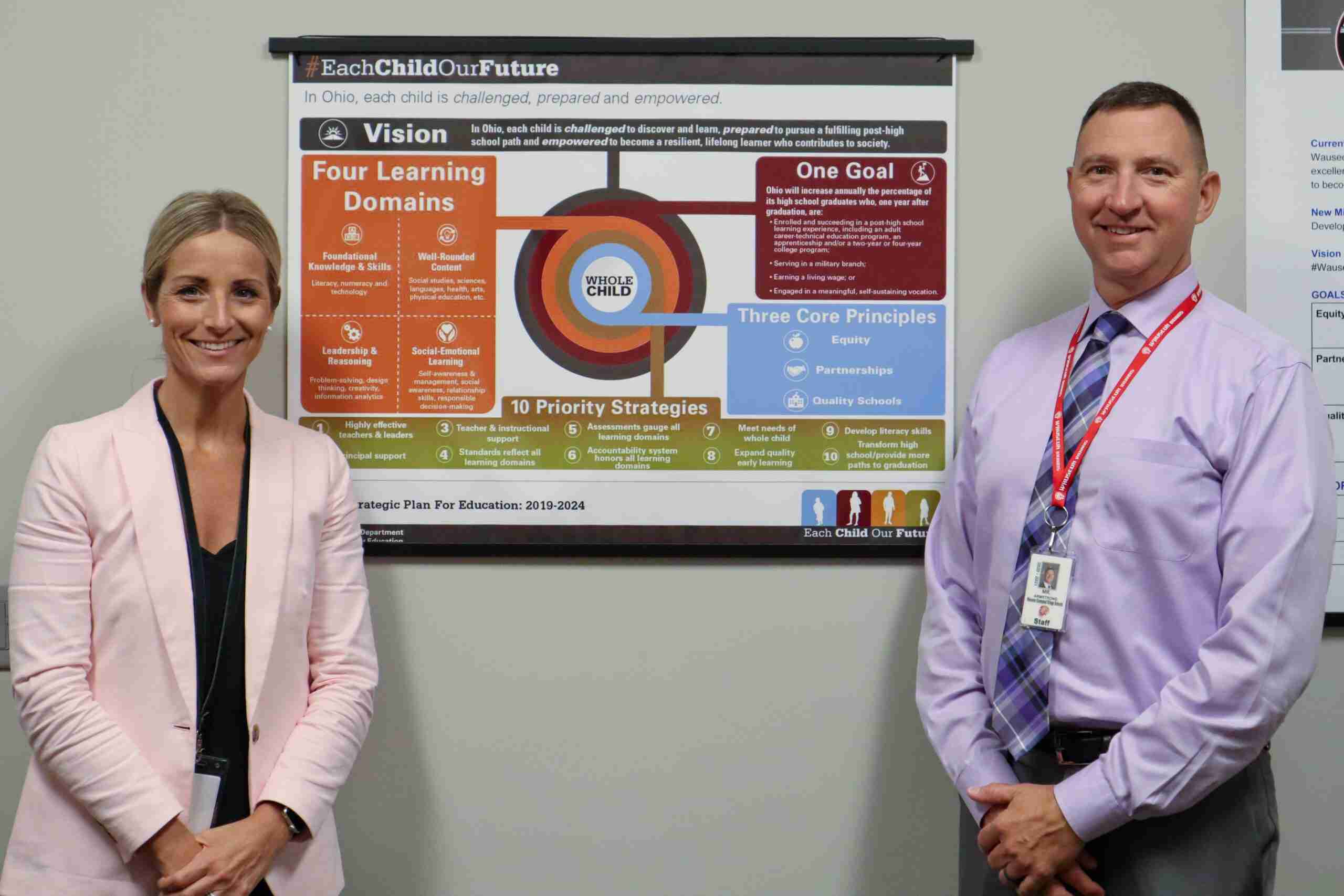 EACH CHILD OUR FUTURE … Director of Instruction Services Michelle Leatherman and Superintendent Troy Armstrong stand in front of a poster describing the Each Child Our Future Plan from the State of Ohio inside the school board offices. (PHOTO BY JACOB KESSLER, STAFF)

The Wauseon School System is implementing a PBIS approach to education which stands for Positive Behavioral Interventions and Support.

According to Michelle Leatherman, who is the Director of Instruction Services, PBIS is a framework that is evidence based and uses strategies that work and are constantly being evaluated.

“The main focus is that the students and staff get the support they need emotionally, academically, behaviorally, and socially,” said Mrs. Leatherman.

The PBIS framework is a tiered system with three levels that all align to the single goal of supporting the student’s needs.

According to PBIS.org the method has been shown to improve student outcomes, social-emotional competence, reduced bullying behaviors and decreased rates of student-reported drug and/or alcohol abuse.

For teachers it has also helped to improve their efficacy, perception of school safety and school health and climate. Together with an improved atmosphere for both teachers and students, PBIS has been shown to decrease office discipline and suspensions.

According to Superintendent Troy Armstrong, this is the ultimate goal. “We are wanting to focus on the positives to decrease negative behavior and negative consequences. To do that we needed to get a common language and common focus for the students and staff.”

“A lot of times before, teachers would say similar things but would say it in their own way. Now, we have a common language so that, even kids in different grades that may not know a different teacher, can understand exactly what it is that they are wanting them to do,” said Mr. Armstrong.

Different grades will also be exposed to different types of standards for this as well in order to be in compliance with the Social & Emotional Standards set by the State of Ohio.

Kindergarten through 5th grade is lumped together and are pretty similar in their strategies with PAX being a primary focus. “PAX is a good behavioral game, and it has been phenomenal. It is something we have been using for a few years now and at first glance you might ask how this could change the climate in schools.”

“When you talk to teachers though, they will tell you how much it has impacted and helped. Everything is clear and defined and everything is the same from class to class,” said Mrs. Leatherman.

There is also classroom guidance where counselors will go into the classrooms in order to help teach children social skills as well as to help with any issues teachers may be seeing.

As children get older, counselors may focus on other issues such as keeping their hands to themselves and conflict resolution.

Moving on to the middle school and high school brings the Ron Clark Academy into focus. The idea is that the school is made up of groups and teamwork shows that we are all better together.

The framework is much like that of Hogwarts from the Harry Potter series where the students are placed into separate “Houses”.

Each house is made up with students from multiple different grades and aspects of diversity. Students with disabilities are also split up and placed into each of the groups evenly.

All of this is done for the purpose of instilling good behavior and teamwork for all of the students. Each group is awarded points for good behavior that each student exhibits throughout the day.

The district will also be applying the seven mind sets to all grades this year as well. The program was piloted in the high school last year and will now be experienced by all students.

“The program is purely a social and emotional learning curriculum based on the seven mindsets,” said Mr. Armstrong. School counselors and teachers work together and on Wednesdays, in the high school, the students watch a 20-minute lesson during 5th period.

These lessons are preselected, and it is the hope to not get the same video twice for the students. Discussions follow after the video in order to allow everyone to talk about it.

“The whole point of all of this is to better the community. Wauseon Pride goes along with taking pride in yourself and your school. It is not just about us as a school, but how we can make the community better because we are creating the future,” said Mr. Armstrong.

As of 2018 PBIS learning has been placed into over 26,000 schools with that number growing every year. Plans like this are becoming required by The State of Ohio due to legislation and the Ohio Strategic Plan for Addressing the Whole Child. Schools will have to follow the Ohio Plan, but PBIS takes it one step further.