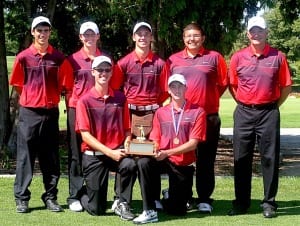 (September 19th, 2014)-DEFIANCE: Auglaize Golf Course hosted the 2014 NWOAL Tournament, and the nine teams in attendance were each eying a league championship. The winner of the tournament was a familiar one, however, as the Wauseon Indians claimed their third consecutive NWOAL championship by a wide margin.

The battle for second place was a largely contested one, with seven of the remaining eight teams staying fairly close to one another. The Locomotives of Montpelier found themselves on the backend of this tight train of teams, finishing a deceptive seventh place overall.

The champions from Wauseon were led by Trevor Dominique and his medalist score of 69. Fellow senior David Williams put up an 81, while teammate Brady Rupp managed an 83. Anna Marshall completed the Indian total with an 88.

For the Locos, Hunter Shaull turned in a team leading score of 83. Also for Montpelier, Sam Rings offered up a 93. Clay O’Neal shot a 95, and Andrew Luke a 97 to round at the Locomotives score.