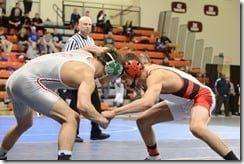 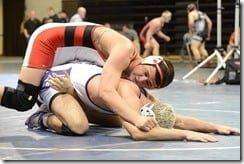 ( L )  Wauseon’s Wade Hodges added a District Title to his Conference Crown and Sectional Championship on Saturday at the Stroh Center on the BGSU Campus.  ( R )  Wauseon’s Tre Campbell dominated the field en route to his 2014 DII District Title. posting a 12-0 victory in the title match.

Wauseon’s Hodges swept his way through competition on Friday and Saturday to claim the title, completing the post-season tournament sweep with a Conference Title in the NWOAL, a Sectional Championship at the BGSU D II North Sectional, and the D II BGSU District Title. With the championship, Hodges carries a 42-4 record heading to Columbus and tremendous momentum heading into the State Meet. Along the way to the title, Hodges dispatched Fostoria’s Lance Smith by technical fall, winning 17-1; Bellevue’s Chase Wilcoxon by pin at the 40 second mark in the 1st period, and Oak Harbor’s Rhett Petersen by pin at the 1:59 mark in the second period. In the title match held on Saturday night, Hodges was paired with Toledo Central Catholic’s Nate Hagan, an opponent Hodges faced and defeated in two other matches this year. In the finals, Hodges and Hagan battled it out for three periods and when the final second on the clock ticked away, Hodges stood tall with a 3-1 victory and the District Title.

At 160 lbs, the Indians Tre Campbell dominated all four of his opponents en route to his 1st District Championship. Opening the tournament on Friday night, Campbell was matched with Norwalk’s Ross Clark, sending a message to the rest of the weight class with a statement 24-9 technical fall. Campbell’s second opponent, Tippacanoe’s Cole Smith fared no better; Campbell wrestled tough and kept Smith off balance throughout the entire match and gained an 11-2 major decision and a semi-final match-up with Bay’s Senior Dom Ruma. In the match with Ruma, Campbell once again took the upper hand from the opening whistle and at the 22 second mark in the second period gained the pin and advanced to the championship match. In the finals held on Saturday Night, Campbell’s opponent, Eaton Senior Aldin Leaker came into the title match off of a good tournament showing, recording three pins on his way to the title match, but Campbell overwhelmed the Eaton Senior and walked off the mat with a 12-0 major decision and the District Title in hand. Campbell will head to Columbus with a 40-10 record on the season and a lot of confidence off of his weekend performance.

In the 170 lb weight class, Senior Aaron Schuette once again sent a statement he will be in the hunt for a state title. Schuette blasted his way through the field taking down Aaron Rice from Vermillion in the meet’s opening match by technical fall, scoring an 18-1 victory. In second round action, Schuette drew Wapakoneta’s Heath Newman. Schuette dispatched Newman early in the second period, recording a pin at the 18-second mark into the period, and securing a spot in the semi-finals against Tippacanoe’s Austin Robbins. Robbins put up a good performance, but in the end, Schuette was able to put Newman on his back and record the late 3rd period pin at the 1:47 mark, securing a title berth in the Championship Round Saturday night. In the match with Newman, Schuette suffered a minor injury, but with the State Invite in hand for next weekend’s Individual State Tournament around the corner, as a precaution, Schuette was held out of the match and finished as a runner-up.

Also on the mat for the Indians at the District Meet, at 106 lbs, Freshman Andrew Bailey went 2-2 for the weekend. Bailey dropped his opening match to Madison Comp’s Mike Baumberger, losing a tight match by the score of 9-5. With the loss, Bailey dropped from the Champion Bracket to the Consolation Bracket, where he drew Thurgood Marshall’s Senior JaVon Honaker. Facing elimination from the Meet (2 losses eliminates a wrestler from the Toournament), Bailey dispatched the senior with a pin at the 1:21 mark in the second period, securing a day 2 match-up on Saturday afternoon. Bailey’s next opponent Defiance’s Freshman Danny Assaf brought a 24-16 record into the match, but the fellow Freshman went down in the second period at the 22 second mark in the second period to an aggressive Bailey, who wrestled a smart match and held the upper hand throughout. Bailey’s tournament came to an end vs. Norwalk’s Sophomore Charlie Nash in the next match, falling by pin at the 1:30 mark in the third period. Bailey’s freshman campaign on the mat ended with a 25-17 record on the season.

In the 126 lb weight class, Sophomore Cameron Slattman opened the Meet with a blasting of Fostoria’s Lance Smith, recording a 18-1 technical fall. However, in his second match of the tournament on Friday night, Slattman fell to Bay’s 40-4 Sophomore Vince Zitiello by major decision 11-2, dropping from the Champion Bracket to the Consolation Bracket on Saturday’s afternoon session. Slattman then faced Lexington’s Junior Brandon Leynaud. In the match with Leynaud, the junior recorded a 8-4 victory ending Slattman’s run at the District Meet. Slattman finished the year with a 31-17 record.

Jackson Sluder at 138 lbs lost his opening match of the meet, falling to Keystone’s Logan Stiner with an overwhelming 17-1 technical fall. Stiner would go on and capture the District Title at 138. Dropping from the Champion Bracket to the Consolation Bracket, Sluder recovered with a pin at the 1:27 point in the second period over Greenville’s Sophomore Daniel Cline. Sluder then was matched up with Perkins Sophomore Seth Boggs. In the match, Sluder was never able to gain the upper hand, and at the 9-second mark in the third period, Boggs recorded the pin. Sluder completes his 2014 junior campaign with a 17-21 record on the year.

In the 182 lb weight class, Senior Alec Vonier dropped his opening match to Clyde’s Garit Witt, falling to the sophomore in a hard fought 10-4 decision. Dropping from the Champion Bracket to the Consolation Bracket on Friday night, Vonier recovered with a pin over Madison Comp’s Junior Darrin Cox, getting the call at the 1:21 mark in the second period. Vonier’s next opponent on the opening Saturday session, Senior Cody Wright from Bay brought a 40-7 record into the match. In a hard fought back and fourth battle between the two Senior’s, Wright was able to gain the upper hand late in the match and record a close 7-4 decision, ending Vonier’s Senior season. Vonier recorded a 29-15 record for the year.

At 285, Sophomore Devon Jones also dropped his opening match of the tournament, falling at the 30-second mark in the second period by pin to Monroe Senior Matt McKinney, dropping the Champion Bracket to the Consolation Bracket. Jones then drew Brookside’s Casey Huhn and with his tournament life on the line, Jones put up a stellar performance in the match, recording a pin at the 50-second mark in the second period, earning another match on the day. Jones was then matched with sophomore Logan Ferrell from Tippacanoe, and the in the match, Jones fought a tough fight, but fell to Ferrell by pin at the 16 second mark in the third period. Jones ends his sophomore campaign on the mat with an 18-16 record on the year.

Wauseon as a team put up 97 points, finishing the 2014 BGSU D II District Meet with a strong 4th place finish out of a field of 53 teams competing.

Jerome Schottenstein Center on the Campus of the Ohio State University beginning on Thursday, February 27 with the opening ceremony taking place at 3:00 p.m.