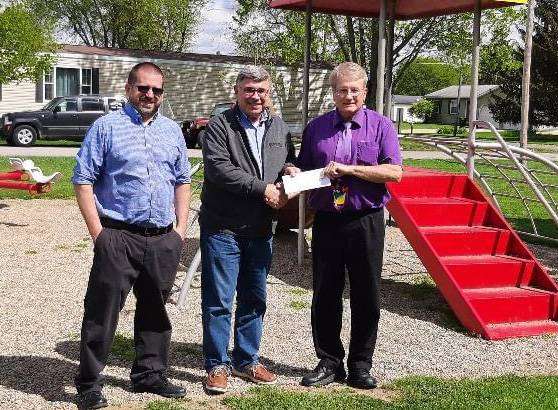 A SWING SET IS COMING! … West Unity Village Administrator Josh Fritsch, Millcreek West Unity Area Foundation Board member Lew Hilkert and West Unity Mayor Don Leu celebrated together at the North Street Park on May 6, 2021. Hilkert was happy to present a check for $5,426 to Mayor Leu to order an 8 foot swing set for this playground where they are pictured. (PHOTO PROVIDED)

During the summer of 2020, West Unity Mayor Don Leu noticed that the playground on North St., know as the North Street Park, needed some paint.

He took it upon himself to show up one day and freshen it up with some new paint.

Over the period of time that he was hard at work and enjoying himself, five different children asked him if he could get them a swing set, as there is not one there.

The park does have a small slide, a bouncy round and a four sided piece of equipment for climbing, but no slide.

Leu gave it some though and soon after his encounter with the children, he filled out an application for a grant from the Millcreek-West Unity Area Foundation, to get the kids a swing set.

With not a lot going on in 2020 due to the covid shutdown, the Foundation had the funds and was happy to grant them.

The Finances of the Millcreek-West Unity Area Foundation, of which Commissioner Lew Hilkert is a board member, are handled by agreement through the Bryan Area Foundation, who does the paperwork and awards the money brought in to both Foundations.

Mayor Leu says that the money they have received will purchase an eight foot commercial playground swing set with two regular swings and two baby swings, as well as the mulch to cover the area.

The village crew will be the ones to assemble it and do the work, but Leu said in a phone interview that he is just happy to be able to get this for the children at the north end of town.

As it is located at the end of a street, many people were unaware the park is there, but he is hoping this will make it a draw and more will enjoy time playing there.