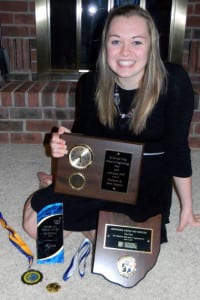 ACHIEVMENTS … Hilltop High School junior, Emily Maneval displays some of her recent awards for her science project, defining what acne medications would kill off non-pathogenic forms of bacteria. Her project helped her place in the Top Four in the regional science fair held in March. She is invited to attend as an observer at the Intel International Science and Engineering Fair event held in Phoenix, Arizona from May 12-17. Some of her recent awards include the Apothecary Medicine Award plaque and $100, and an U.S. Public Health Service Award medallion.

A culmination of hard work, and successful showings at state and regional science fair events, has resulted into a substantial prize for one Hilltop High School junior.

Emily Maneval has been busy since February, taking part in regional and state science fair events and ranking with high marks. Her project, defining what acne medications would kill off non-pathogenic forms of bacteria placed her in the Top Four regionally, allowing her to attend the Intel International Science and Engineering Fair event held in Phoenix Arizona from May 12-17.

The ISEF event is considered the world’s largest international pre-college science competition. It provides an annual forum for more than 1,500 high school students from about 70 countries, regions, and territories to showcase their independent research as they compete for over $3 million in scholarships and awards.

Maneval will attend as an observer since the top two contestants are only allowed to showcase their works in Phoenix. Maneval, and Hicksville student Lauren Payne, will observe as the region’s top two winners Chrysta Beck of Pettisville, and Travis Lysaght of Hicksville, showcase their projects.

Maneval already plans to become one of the top two members next year. In the meantime, she expects to learn quite a lot from the Phoenix trip.

“I haven’t thought out what I want to do, but I am going to try for this again next year and do as much as I can to be selected in the top two,” Maneval said. While I’m there, I’ll observe the others showcasing their projects and how everyone works at the event and interacts with the judges.”

May is going to be a busy month for Maneval. Before she flies to Phoenix, she is attending the state science event held at the Ohio State University campus on May 11.

Since Maneval is one of five students competing for state science fair glory, she already has a plan in place.

“I have to do some quick preparations for the state event, to get things organized for the judges at state,” she said. “Then I have to hurry and get ready to go to Phoenix.

“Since I am not competing in the international science fair, I don’t have to take my materials, so it will be less stress for me,” she added.

Maneval came upon her perfect science project after an online search on acne. She originally had planned to resurrect her eighth grade project comprising of a study she did on how children can visually define the differences between candy and medicines that looked like candy.

“The children knew just from looking at them that one was medicine and the other was really candy,” she said. “Some of the medicines really looked like candy but children seemed to know.”

Maneval shelved her older project and began researching different forms of bacteria and what medicines to use against the strains. After purchasing the specimens online, the strains were placed in an incubator and properly housed until test time.

Her tests determined that the strains of E-Coli and Staphylococcus Epidermis could be killed by using a 5 percent solution of Salicylic Acid versus a 2 percent form of Benzoyl Peroxide.

“I also found out that it didn’t matter if the medicines used in the tests were a cream or astringent,” she said, adding that incubation for the bacteria took two days.

In total, Maneval had 40 trays of E-Coli and 40 of the staph bacteria for her experiment. She received some help from her science teacher Cristin Hagans.

“I pretty much did everything on my own, and did the research on how long the bacteria needed to be in the incubator before the actual test,” she said. “It was pretty interesting to see how the bacteria reacted to the treatments.”

Expect Maneval to continue with her science goals and experiments. She said her experiences at the recent science fair solidified her ambitions on being either a pre-medical or biology student.

“My grandmother was a nurse, and she always taught me the different terms they use in the field, so I thought that was interesting,” she said, adding that she applied for a scholarship in Toledo and another at Ohio State University.

“If I get the scholarship in Toledo I want to be in pre med, but if I go to Ohio State I want to be in biology,” she said. “I also am thinking about studying to be an ob-gyn.”

The news of her medical science ambitions is heart warming for Hagans. In her 20 years of service at Hilltop High School, she has seen a plethora of students taking an interest in science.

Hagans credits the district for its proactive approach in science and all subjects. This year alone, she has seen students excelling in the local, district, and regional science fair competitions.

“The students can decide to attend the regional science fair, sponsored by the Northwest Ohio Science and Engineering Fair Council, Incorporated, or attend the one held at the University of Toledo, which is sponsored by the Ohio Academy of Science,” Hagans said. “They can do both if they want to give them more exposure to the competitions out there.

“I think over the years we typically have had students participate at every science fair locally or at districts and state.”
Fundraisers and community support helps students with travel expenses. While Maneval and other students participated in an Archbold fundraiser at Samuel Mancino’s Italian in March, additional money will be provided from parents and from the Northwest Ohio Science and Engineering Fair Council Incorporated.

NWOSEF President Jim Short said the organization does what it can to provide students with some of the resources to get them on their way. The committee also organizes the regional science fair held in March.

“The trips can cost, but the overall experience for the students is game changing,” Short said. “There will be students and representatives there from different countries as well as different states, and there usually are Nobel Prize winners interacting with the student participants.

“It would be a great opportunity to interact with people from other schools and cultures and expand one’s horizons,” he added.
College recruiters may be on hand as well, scouting future students while witnessing some of the best scientific minds of the future. In the past, Short has seen college recruiters attending previous international science fairs located in Pittsburgh, Orlando, Tulsa, Fort Worth, Reno, San Jose, and Los Angeles.

Yet there are other opportunities as well. Short recalled one international science fair in California and Florida where students went behind the scenes at Universal Studios and Disney World.

“The international event can offer students a wealth of different opportunities and rewards for their efforts,” he said. “Competing in the state fairs also offers students a chance receive scholarships to further their education.”

“Collin did his project on solar panels and went on to state,” Short said. “There are renewable scholarships out there where students can have that money throughout the duration of their studies.”

Other awards are given to students who show real craftsmanship and dedication to their work.

Short credits students’ interest in science to proactive teachers and staff. He said teachers like Hagans, who was a science fair contestant herself years ago, provides the spark needed to keep science interesting in schools.

“The science fairs covers all the requirements in any school district, and offers more than just team building and project construction,” he said. “It covers not only science, but mathematics, public speaking, language, organizational and debate skills, and all of these things will help prepare these young minds for the future.”

Hilltop middle school science teacher Abby Smith is another teacher readying her students for science projects. Currently the NWOSEF treasurer is prepping students interested in attending the Broadcom MASTERS event where 30 finalists will head to Washington D.C. to compete.

Middle school students can be nominated after participating in Society for Science & the Public affiliated science fairs held during the school year. Students must submit essays by June 17, detailing their project and reasons for attending.

Smith estimates there will be hundreds of students taking part in that event, About 400 students will be selected before being narrowed down to a list of 30. The 30 selected are then invited to the nation’s capital.

“There is the opportunity to win some nice awards and scholarships,” Smith said. “The competition there is pretty strong, but I think we have a good chance here.”

Smith’s student, Colleen Bell may be one strong contestant. Her project, similar to what may be seen in PBS TV show America’s Test Kitchen, defined the differences of certain cookie sheets and the baking times for cookies.

“Colleen is one students who shows real promise and thinks of projects the judges may not have seen before,” Smith said. “I think for students to do well, they have to be interested so they can take the time to do the research, then put things together that makes sense for everyone at the fairs.

““If they find the time to practice and work at it, they will find a wealth of opportunity to move them forward,” she added.

Short said keeping science interesting is sometimes a challenge to students. With most children dedicating time to other school projects, home issues and other extra curricular activities, finding time for science fairs can be difficult.

“Early on we might have a student or two who may not show for a science fair because there are other things going on in life, but I tell some of them, it’s no different than taking the time to practice in sports or in other projects,” Short said.

Maneval is grateful for her chance to compete and was surprised at how far she excelled in her recent project. Despite balancing dance class at the Bryan Community School of Dance, homework and chores, she has no regrets to taking part in the science fairs.
“I wasn’t sure just how far things would go, but I managed to find the time to make sure everything worked well,” Maneval said. “I think when you enjoy doing something so much, you don’t mind finding the time to participate.

“But I don’t think I would have made it as far if I didn’t have Mrs. Hagans helping me with things, and my parents for being so supportive.”