The West Unity Village Council held their regular meeting on Thursday, February 28. While no legislative matters were brought before council, there was much discussion involving ongoing improvements in the village.

Village Administrator Ric Beals told Council that he is continuing to work on bringing curbside recycling services into the village. To date 108 people have shown interest in having this service. While the original goal was 165, it is the belief of Beals and others he has spoken with that once the services are in place that more people will sign up. As of right now Republic Services is the primary company that Beals is working with to bring in this service. Republic Services would provide all the containers necessary for customers and there would be no need for customers to sort their recyclables. Pick up would occur every two weeks. The service, if implemented through Republic Services, would cost customers $18 per quarterly billing cycle and Republic Services would handle all billing and collection duties. Purchasing the service will be optional for all West Unity residents. It should be noted that other companies are still being talked to and no final agreement has yet been made. However, Beals hopes to have the service implemented by May 1 or, at the latest, June 1. 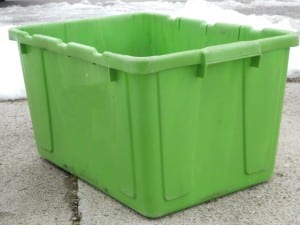 Recycling containers such as the one pictured may be a common sight along the curbsides of West Unity very soon.

Residents will also want to note that the village is now able to accept credit and debit cards for utility and tax payments. Farmers and Merchants State Bank assisted with the implementation of the service. Those customers wishing to use their credit or debit card will be charged a three dollar convenience fee. This fee is to cover the expenses of the village for offering the service.

Beals also made Council aware that he purchased twenty-one 3 to 4 foot birch and maple trees from the Arbor Day Foundation to replace the trees cut down by the village late in 2012. Also purchased from B&G was a new chain saw needed to replace the one stolen from the maintenance barn.

Other improvements being made in the village include that the abandoned Mann property on S. Defiance Street will soon be coming down and that Beals has been meeting with Ruralogic as well as other web designers obtaining quotes to on designing a new website for the village. Self web design is also being considered to help defray costs.

It was also noted that the water line on S. High Street broke once again between Library and Lynn. This is the second break of this particular line in 2013. While village employees have been quick to respond to the breaks, the rate of the reoccurrence is of concern to Beals, who is sure that the problem rests with the age of the water line. The village is working on diagnosing and correcting the problem.

Council member Donovan Leu also addressed the rest of the council with the proposition that now might be the prime time to consider contacting the Ohio Turnpike Commission about the possibility of adding an exit onto U.S. 127. Leu’s proposal is for automated straight exit and entrance ramps that would be less costly than the more traditional loop ramps.

Council responded to Leu’s proposition with a great deal of support as such an exit would be enticing to new industries wishing to move into the area. It was noted that water and sewage lines already exist along U.S. 127 from the village to the two plazas located on the turnpike.

Leu suggested that both Mayor Bernath and Administrator Beals begin making a couple of phone calls as well as writing letter to the Ohio Turnpike Commission and state legislators to find out what steps would need to be taken to start such a project as well as to tap into new bond funding now under consideration in Ohio House Bill 51.