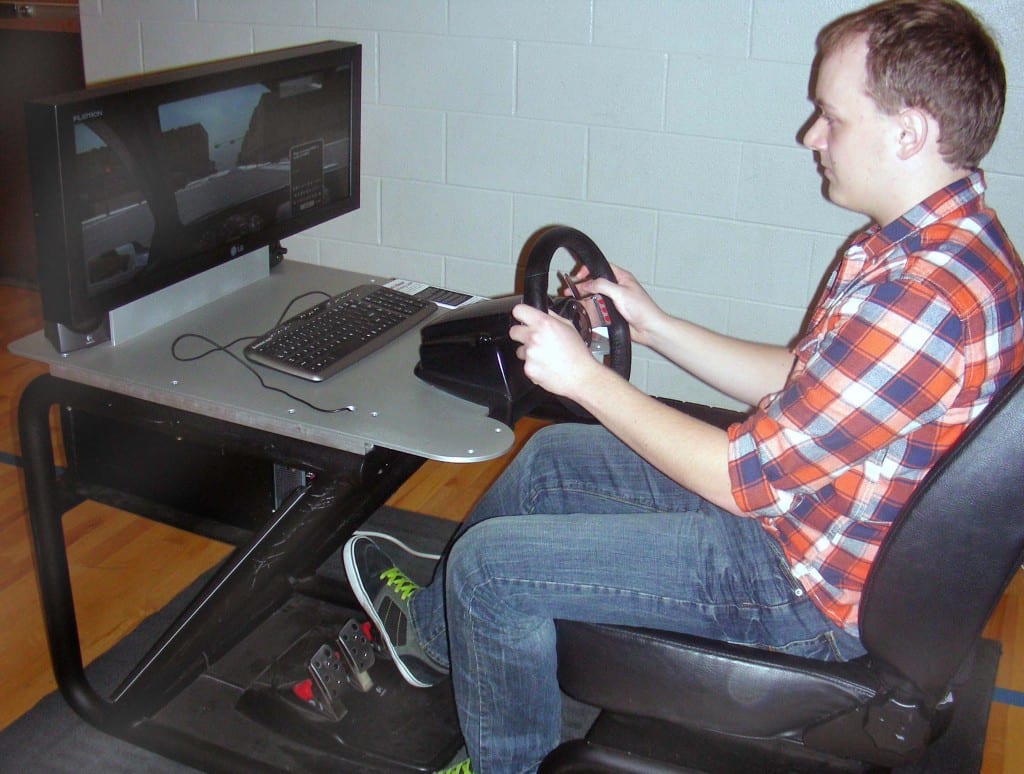 Kaleb Long tries his hand at the simulator.

Williams County – Students at the local high schools received the opportunity to test their ability to drive while distracted or impaired by taking a spin on the Ohio Department of Transportation’s Distracted Driver Simulator.  The driver simulator demonstrates the link between distracted driving and crashes by promoting safe driving practices through an interactive, “hands-on” activity which features a computer-generated simulation of realistic driving scenarios.  After “buckling up,” the driver takes the wheel and must drive with distractions or with impaired abilities such as those caused by drug or alcohol use. In the driving scenario, the participant receives a phone call, sends a text message or listens to passenger conversations while navigating at the wheel. When the driver makes an error and is involved in a crash that results in realistic simulated interactions with police, medical staff and a judge. Peg Buda, Safe Communities Coordinator, who implemented the simulator program stated that “One of the biggest concerns with new drivers is distracted driving, especially cell phone use. Cell phones not only take your eyes off the road and can require manual operation; they also take your mind off the task of driving. Driving safely requires full attention.”

For the second year in a row, the number of teen drivers involved in fatal crashes has increased. The Governors Highway Safety Association preliminary data released this week reported there was a nearly 19 percent increase in the number of deaths among 16- and 17-year-old drivers in the first six months of 2012 compared with the same period in 2011.  Nationally teen drivers are involved in more collisions and fatal crashes on the road that any other age group.

Ohio’s new texting law which bans cell phone use for teen under eighteen while driving goes into full affect this week allowing law officers to issue tickets instead of warnings. This means no texting, emailing, cell phone use, video games ipad/tablet or handheld GPS use while driving, even when sitting at a light or in a traffic jam. As a primary offense use of these electronic devices is the only reason a police officer needs to pull over a teen.  The first violation is $150 and 60 days suspended license.  Second violation is $300 and license suspended for one year.

Adult drivers face a $150 fine for texting or reading/sending emails as a secondary offense.