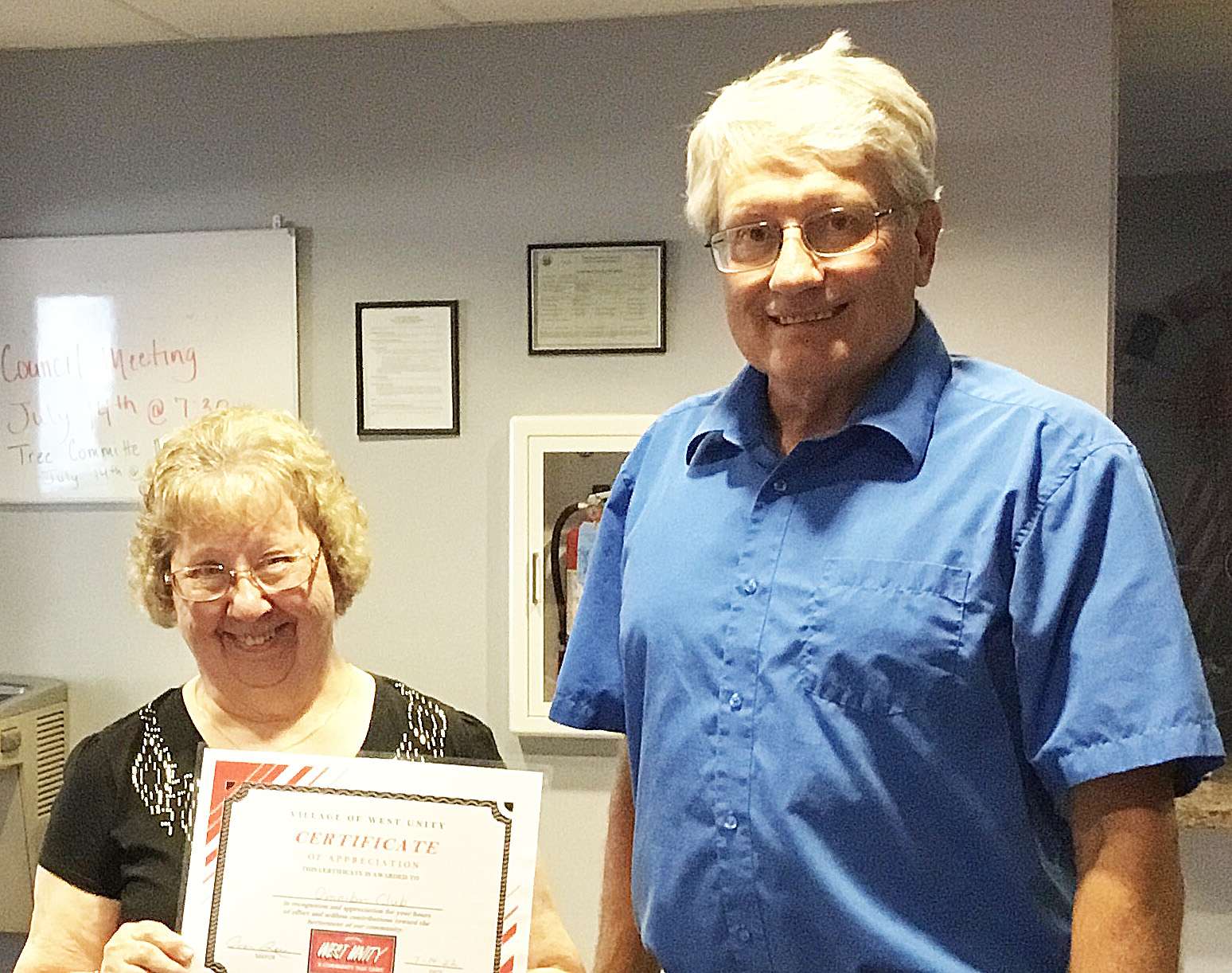 OMNIBUS CLUB … West Unity Omnibus Club President Linda Sumner accepted a Certificate of Appreciation on behalf of the club, from the village that was presented by Mayor Don Leu at the July 14, 2022 council meeting. (PHOTO BY REBECCA MILLER, STAFF)

Mayor Don Leu welcomed Linda Sumner, President of the W.U. Omnibus Club and presented her with a Certificate of Appreciation.

The certificate stated that it was “in recognition and appreciation for your hours of effort and selfless contributions toward the betterment of our community.”

Sumner thanked the council and Mayor, and said that as they have been watering the downtown planters of flowers for many, many years, it is great to be recognized and appreciated.

Mayor Leu said they do a wonderful job and council members all thanked her and complimented the Omnibus Club for continuing to be faithful in their service.

Sumner said that even now as they are getting older and they are doing it with their walkers and golf carts they enjoy doing it.

In his Village Administrator report, Josh Fritsch informed council that the Williams County Commissioners need to sign off on the resolution that covers the Church St. project as it was funded by CDBG money.

The splash pad is finished and some children were using it already. The official first day of use was scheduled for Friday, July 15th and the Grand Opening will be held on July 27th.

The fence will stay up to try to keep kids off the newly seeded grass, and there will be a rock put over the valve to hide it.

Hydrant Flushing will be done July 25th through 29th. Big trash pickup date will probably be in September with the date to be set.

Chief J.R. Jones reported that the village was awarded a Drug Use Prevention grant to give training to the school students who can no longer experience the DARE program.

He said that it will be used with 5th and 8th graders and that School Resource Officers Phil Frey and Homer Chappa will be teaching it. They hope to build on it in the future. It comes through the Ohio Attorney General’s office.

As the Village Clerk, Sarah Higdon, was unable to be present, Mayor Leu shared that the village had received its next payment of the government money. The splash pad will be opened 9-9.

He thanked everyone who helped and Fritsch said there were around thirty who helped get that done. The Grand Opening was discussed and set for 5:30 on July 27th.

Leu said that there will possibly be some government officials attending, including Ohio State Representative Jim Hoops, Ohio Senator Rob McColley and someone from the Montpelier Foundation.

Fritsch added that there is no age limit for the use of the Splash Pad, and jokingly added they could not drive golf carts through the water on the splash pad.

Mayor Leu encouraged council members to be thinking of a name for the new East/West street in the new division. The North/South street was named Martindale and now they need to name the other.

Village Solicitor Katie Rakes informed council that the complaint against the village auditor would be filed on July 15, 2022 at the Courthouse.

She also asked Council to set the date for the Public Hearing on the Family Dollar parcel. She had the notice ready to mail to land owners and to publish in the paper.

There was some discussion about timing, but it was determined that she could contact the paper the next day so they can try to hold the hearing at 7 p.m. on August 11 before the regular meeting which will be held at 7:30.

Rakes also explained that the council did not need to pass a resolution to accept the lot split, as that would be overstepping their bounds. The authority lies with the Planning Commission. She instructed Fritsch on the signing of the paperwork.

All of the Council members thanked the village crew for all the hard work on the splash pad.

Councilman Steve Marvin expressed his concern and frustration that nothing seems to be happening about the upkeep and repair of the Ring Cemetery.

He shared that there is a group who are trying to get something done about it and he is hoping that the Township Trustees can be pushed to take care of the upkeep more than just mowing.

He also asked if the village could legally do anything to help with the process to show respect.

Rakes checked online to see what the ordinance states and said that the township is responsible for the maintenance, protection, and preservation. She said she can draft a letter to the township trustees.

Following a few more complimentary comments on the splash pad, with no further business, the meeting adjourned.