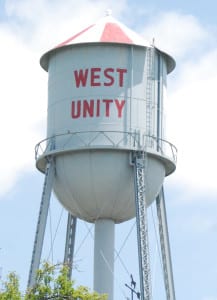 During their June 12 meeting, members of the West Unity Village Council came to the decision to let the old water tower at the corner of Church and North Madison Streets stand.  Council had previously considered opening up bids to have the tower taken down.  However, they have also taken into account concerns voiced by residents that the tower is a historical landmark in West Unity.

Whether or not the tower is needed for water purposes is still an open question.  While the newer water tower has enough capacity to satisfy the current needs of the village, it was noted that a case of a major water line break to the turnpike plaza or an increase in demand could create necessity for both towers.

The decision to maintain both towers came with the approval to continue on with discussion and the process of opening bids to make some repairs that are needed to the old tower.  Estimated costs of the repairs are $17,300.

During the meeting, council also heard concerns about excessive truck traffic and noise in the area near South Liberty Street from several residents.  The residents noted that an independent company located just outside the village limits is creating this concern as well as causing wear and tear on the road.  Council will be placing a sign up on Leigh Drive that through trucks are not permitted but did advise the residents that the best and quickest way to handle the issue would be to contact the Brady Township trustees as they have jurisdiction over that particular portion of the road.

Council also moved forward in making a final decision on the two mile section of trails that are open for the Village’s purchase from the Northwest Ohio Rails to Trails Association.  Discussions on the matter have been approved for continuance and Village Solicitor Ryan Thompson has been authorized to proceed with the drawing up of the contract.

In his report, Village Administrator Ric Beals informed council that a used weather siren was purchased for $100 from the City of Bryan and is being installed.  The siren will work in tandem with the new county wide Everbridge alert system and provide back up security for anyone who does not carry a cell phone. The Everbridge system should be up and working within the next month.  Beals also noted that a dump truck bed frame was welded securely at a cost of $1800 and that the repair is considered to be as safe as the purchase of a new part would have been.  A burnt out motor for the Oak Street fire protection tank was replaced with a new motor at a cost of $4981 and the Kissell Building air conditioning was replaced at a cost of $5981.

In legislative matters, Council approved new code that will allow for anyone who engages in abusive conduct at sporting events to be banned from such events for up to twelve months.  The code applies to all parents, coaches, players, and spectators.  While Police Chief J.R. Jones noted that the West Unity Police Department has always had jurisdiction at the park, giving the department the right to issue citations for disorderly conduct or other pertinent charges in such cases, he also explained that he considered the stronger code to be necessary as it would serve as a reminder to all of those watching or participating in sporting events that abusive and/or threatening actions will not be tolerated by anyone in the Village.  It is hoped that the code will decrease the amount of such behavior.

The next meeting of the West Unity Village Council will be held on June 26 at 7:30 PM in council chambers.