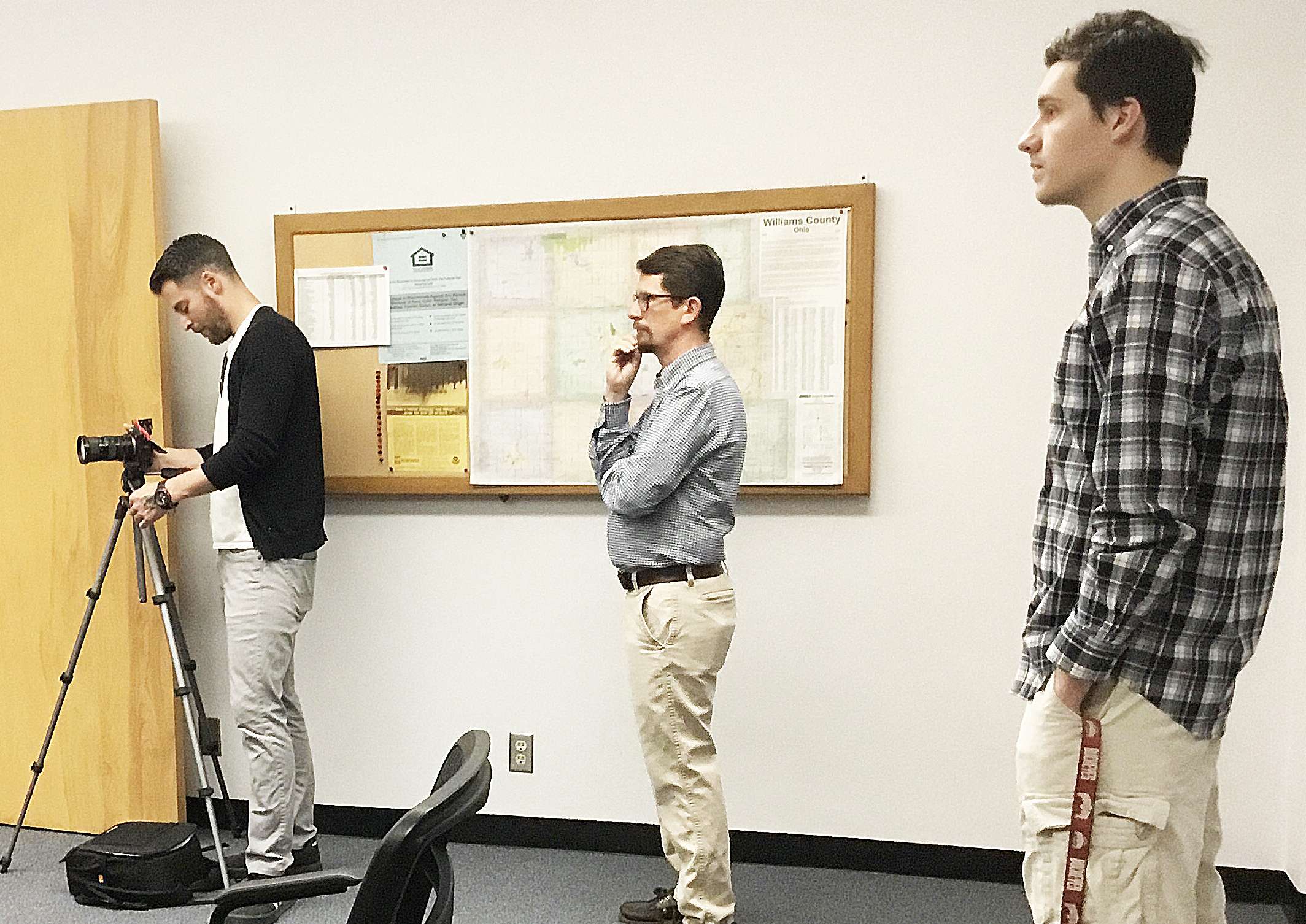 DOCUMENTARY … Williams County Public Library video team was present at the Thursday, May 19, 2022 session of the Williams County Commissioners to record a portion of their actions for a documentary. On the camera was Robert Doster, Videographer, just behind him are Programming Manager Denver Henderson, III and Local History Manager Jared Schnee. (PHOTO BY REBECCA MILLER, STAFF)

On Monday, May 16, 2022, Williams County Commissioners began with a short session to approve the following:

As Commissioner Lew Hilkert was unable to be present in the meeting, he was on the phone to inform Commissioners Brian Davis and Terry Rummel of a call he had received.

Hilkert said he had gotten a call from Kyle Brigle and Jesse Brumbaugh late Thursday, May 12th, concerning the possible purchase of another emergency vehicle.

As the county is in the process of upgrading some of the ambulances at the EMS, and have received one quite some time ago that is not ready for service yet, but will be soon, and a second one is on order, he wanted to present this possibility right away.

The company that is working on getting the second one ready contacted Brumbaugh to let him know that they have a new chassis available due to another entity canceling their order. He said they want to give Williams County first dibs on it if they are interested.

Following a short discussion between the three commissioners it was agreed that they should take this opportunity as it is so difficult to get new vehicles and keep the fleet up to date.

After a short recess, an Executive Session was held to discuss the sale and/or purchase of property, with County Health Commissioner Jim Watkins and Dee Custar. There was no action taken.

A little before 10 a.m., they reconvened to meet with Jeff Dick, Educator for the Williams County Ohio State University Extension, for an update on 4-H in the county.

He reported that covid did cut the number of members way down and he is hoping to build those back up. Before covid there were around 600 in 2019, around 950 in 2012 when Jeff was the Educator for a while, and now there are 562 students.

Out of those, 132 are Cloverbuds – Kindergarten through 2nd graders, and 430 are traditional members which is 3rd grade through age 18. 4-H has definitely not recovered yet from the hit that covid gave to all organizations, he explained, but are on the grow.

They presently have 101 volunteers in the county and he hopes to grow that along with the number of members.

It is a great hope of the WC 4-H program that they will be able to draw kids away from social media and into real life relationships with others their age.

Getting involved in the hands-on possibilities offered in 4-H is a great way to grow and enjoy life. The extension is stepping up to create some programs that might go beyond the traditional 4-H club, such as Real Money, Real World which teaches kids how to handle finances.

Presently all but one of the county schools has welcomed Jessica Runkel with this program into their schools, and that one is in the process of joining now also.

Another thing that got started and they want to keep it going, is called Spin Club programming. This is a new focus in Ohio 4-H, bringing kids together that are not necessarily traditional 4-H members to learn about a specific topic.

These were starting just before covid hit and so many of them became Virtual Spin Clubs. It is his hope to keep them going and get them into being in person locally.

Jess stated that he hopes to tear down the perception that only kids who live on farms and want to raise animals can be in 4-H. It is for ALL students interested in joining.

The number of topics available is great (over 200) and there is even one for self-determined study.

The commissioners welcomed Jeff Dick back to the position he held in the past and thanked him for the update. With no further business for the day, they adjourned.

On Thursday, May 19, 2022, another short session was held at 9 a.m., but a team was there from the Williams County Public Library to record the session. Programming Manager Denver Henderson, III, Local History Manager Jared Schnee and Videographer Robert Doster arrived a little early to set up equipment.

Doster filmed the session and assured the commissioners that he will be using some of the video in the documentary they are making on the Williams County Courthouse.

In Regular business, the commissioners voted to approve:

-Resolution 148 Entering into a Contract Extension between WC JFS and WC Common Pleas Court, Juvenile Division for contracting preventative services to a Public Children Services Agency considered necessary to protect children from abuse, neglect, or dependency and to further reduce or eliminate Court involvement at a cost not to exceed $75,000.

-Resolution 150 Entering into an agreement between WC Commissioners/WC Common Pleas Court-Juvenile/Probate Division and Northwest Ohio Educational Service Center to provide funds for an Attendance Officer for the seven public school districts in Williams County. Term of agreement if August 1, 2022 through July 31, 2023.

-Also Signed: Liquor Permit application from WC Senior Fair Board for Car and Bike show on June 24-26, 2022; Credit card appropriation on behalf of Auditor’s office for May 2022 and Sheriff’s office for June 2022; Recommendation to Change Employee from full time transportation and Maintenance Supervisor to Senior Site Assistant; Permit to work within County/Township Road Right-of -Way limits on behalf of Ohio Gas Company; Letter to the auditor on behalf of JFS regarding 3rd party expense and payment of taxes; amended travel expense reimbursement application for Michael Levy; third quarter invoice for CCNO

Concerning the purchase of a new ambulance which was discussed on Monday, Commissioner Lew Hilkert informed the other members that he did receive an email from Jesse Brumbaugh saying that there was a payment plan offer if they wanted to use it.

Hilkert recommended that they not go that route, but go ahead and order the ambulance and pay in full when it is done. With no further business for the week, the commissioners adjourned.