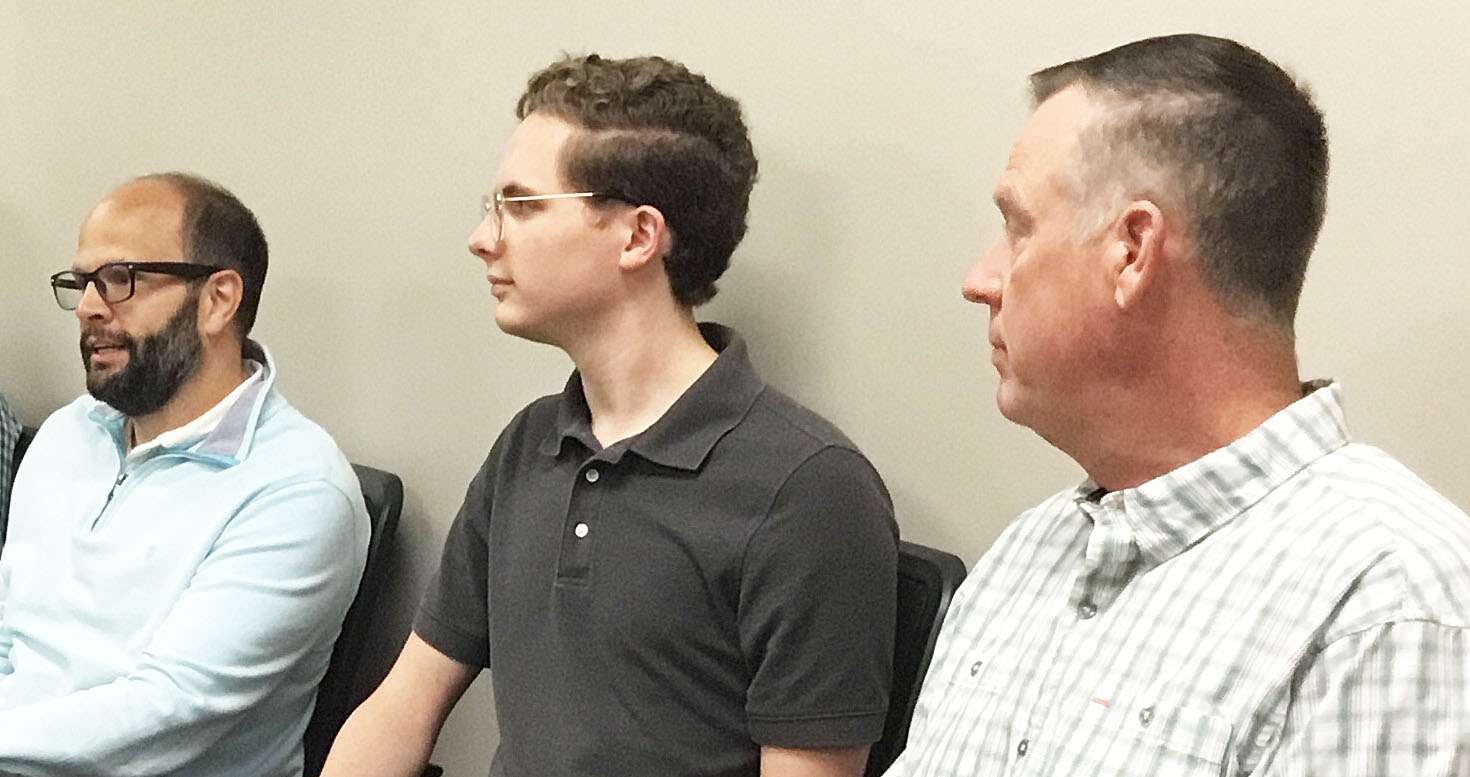 BOARD OF ELECTIONS … During the morning of September 22, 2022, a budget report was given to the Williams County Commissioners by AJ Norvaczyk, the Deputy Director of the Board of Elections (on the left). Also present, were Board of Elections co-chair Jeff Erb (on right) and Director Grant Sims (in center). (PHOTO BY REBECCA MILLER, STAFF)

After having a number of very short meetings over the past few weeks, Williams County Commissioners had a full and busy morning on September 22, 2022.

Their Thursday began with an executive session at 8:00 a.m. to discuss security matters with Judge Karen Gallagher. There was no action taken and Regular session began at 9:03. The commissioners approved:

Following a half hour recess, they continued by returning to regular session and immediately entering Executive Session with JFS Director Fred Lord, in regards to employment of personnel.

They came out of this with No Action Taken as well, held a short recess and then met with Board of Elections co-chair Jeff Erb, Director Grant Sims and Deputy Director AJ Norvaczyk in regular session.

Before talking about the Budget, the reason for the visit from the Board of Elections, Erb shared some news with the commissioners that gives an idea of the things that the department deals with.

“We have had kind of a crazy year,” Erb said, “with an extra election thrown in the middle and postponements prior to that.”

“We just had another little hiccup that I don’t know if you have heard about it or not. As we speak, the folks down in the Board of Elections office are destroying, opening up ballots, as the ones that are ready to go out are no longer valid.”

He and Norvczyk went on to explain that the State level judges have required a change to the ballots as the independent Secretary of State candidate Terpsehore Tore Maras won her supreme court cast late Tuesday night, September 20th.

The ballots for those in uniform needed to go out on Friday, the 23rd , and as they were all ready to go, they had to be opened and changed.  There were a total of 1300 ballots ready to go, which all need to be re-stuffed.

Concerning the budget, AJ shared information concerning an 8% raise which the commissioners had already approved. It is now in the budget, with the 3% beginning of year raise, for 2023.

The discussion brought out the reason for the raise, being that the board of elections needs to keep the excellent staff that is now working for Williams County and in order to do so they wanted to offer close to what other counties are offering in pay.

“These guys are really good,” Erb said, “and we’ve got to keep them. So, what we did was bring them up to the bottom level of surrounding counties.”

There was further discussion about how many hours a week they work and how that is spread out differently throughout the year as well as some specific numbers.

Commissioner Brian Davis mentioned that the “Contract service line” is going to be down $20,000 and asked if that is sustainable.

AJ said that he believes it is sustainable for the future and if not, they might need to drop it a little more.

All of the equipment is up for unavoidable upgrades, especially as the poll pads are at end of life with Apple.

He mentioned that there is legislation for possible grants for this and that he would like to wait to see if that is available before making that purchase.

He said that there was good news, that they still have $64,000 state funding left from the 2018 purchases and that will most likely cover the software that is needed.

This will keep the election equipment the most secure. That should cost $35,000. AJ said that they are extremely grateful for all the technical help they get from Jeremy Suffel, the County IT Manager.

The overall budget increase is 12.76% or $47,792. Commissioner Terry Rummel thanked the gentlemen for coming and said,

“We hear great things out of your office. I personally appreciate what both of you (AJ and Grant) are bringing to the table.”

Erb said that he is impressed with the great work atmosphere at the board of elections and that he has heard it is a great place to work.

“These guys have created an environment where people get their job done and they are excellent at what they do and they have fun,” he said. AJ added, “We have a great staff.”

Following another short recess, the Commissioners went into an executive session for the purchase or sale of property with Deb Guilford, Board of Developmental Disabilities Interim Superintendent.

There was no action taken and the Commissioners adjourned for the day at 10:48 a.m.