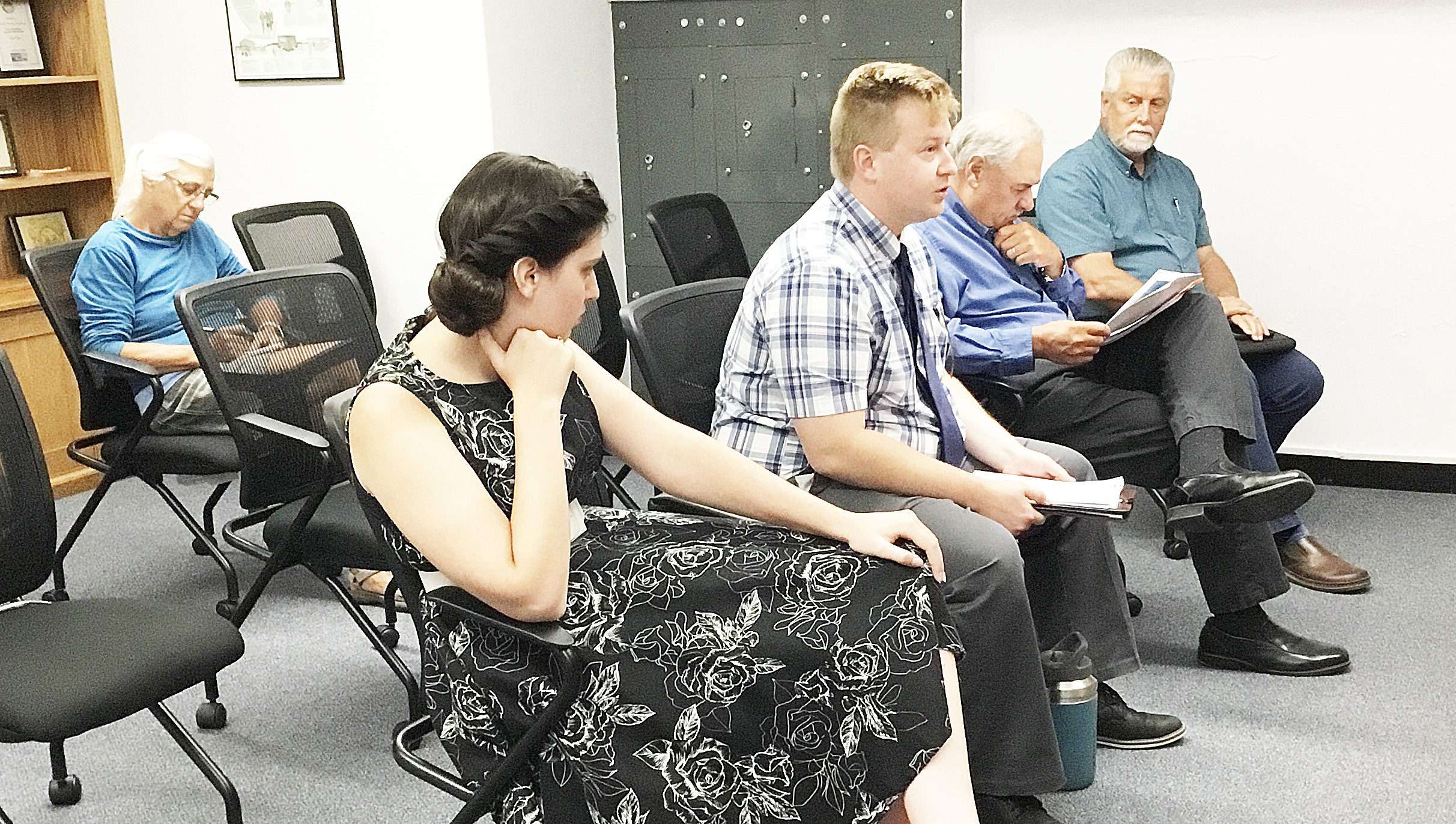 PUBLIC HEARING … Hearing #2 concerning two infrastructure grants was held on June 27, 2022 with the Williams County Commissioners. In the back is Lou Pendleton who was there with concerns that one of the projects was being done because of AquaBounty. The front row shows assistant clerk Jillian Drinnon, Adam Panas and Dennis Miller from Maumee Valley Planning Organization and soon to be commissioner Bart Westfall. (PHOTO BY REBECCA MILLER, STAFF)

Dennis Miller and Adam Panas of Maumee Valley Planning Organization were present at the June 27, 2022 WC Commissioners meeting at 9:30 a.m. to participate in the second hearing on Critical Infrastructure.

Also there were incoming Commissioner Bart Westfall and area resident Lou Pendleton. Panas reviewed CDBG/CDIS Public Hearing #1 in which they presented all the different types of CDBG programs available for the commissioners to apply for on behalf of the communities.

“We have two projects that we think would be really good here and they are both for the critical infrastructure CDBG program, which has a maximum grant request of $500,000,” Panas began the second hearing.

The first one they addressed is in Bryan, on S. Lynn St. or the 400-900 block. The waterlines are old cast iron which is brittle and needs to be replaced.

Not only will replacement give the residents better water, it will also bring the lines up to Ohio’s Fire Hydrant standards, making the community safer in the event of a house fire.

For this project, they are applying for $285,000 of CDBG money, proposing that $20,000 goes to administration fees and the rest to construction costs.

Ohio Public Works Commission has agreed to $275,000 towards the same project, City of Bryan has agreed to cover the remaining $60,000, so “as this project is quoted at $600,000, with this proposed project budget and where the funds are all coming from, that would both cover construction costs and administration.”

The funds would be available this Fall and by the time the environmental evaluation is done, and other grant funding is researched, it should be ready to go.

The second project discussed is also in Madison Township, being a “stretch of Township Road 15, southeast of Pioneer, from CR R down to US 20.”

This is a one-mile section of road that is badly rutted and has major deterioration on the edges. As this is one of the main routes in and out of Pioneer, and has been greatly used as the detour recently, due to re-construction of Pioneer’s State Street, it is in dire need of repair.

MVPO is considering applying for close to the maximum amount, for a total of $470,00 of critical infrastructure grant money. $450,000 would go toward construction and $20,000 to MVPO.

The remaining in principal “could be earmarked by the commissioners” and application made to OPWC funds to help reimburse that. “In the case that we were not awarded those funds,” Panas said, “the Village of Pioneer and Madison Township would be the ones that would pay that.”

Miller added that he had spoken with WC Engineer, Todd Roth, and Roth intends to apply to OPW for a combined application for CR 15 and CR 11.5.

“That would provide funding for both projects out of the OPWC funding and MVPO would commit the $55,000 to this project and the balance of those funds would go to 11.50. The $450,000 with CDBG would complete this project with OPW, so there would not be a local match for this project.”

Some repair of the curbing and edges will be done by WC Engineering Dept., from CR R to Baubice St., as that is not part of the grant award but needs to be done.

Commissioner Lew Hilkert asked if there are any “mitigation funds available to take care of roads like this.” Miller said that he is not aware of any but can check with Roth.

Commissioner Terry Rummel thanked MVPO for getting this “good money coming in for much needed projects in Williams County.”

Alliance member Lou Pendleton was present due to concern that this money had to be applied for and spent because of the presence of AquaBounty.

Commissioner Rummel asked Pendleton if it was ok to ask her questions off the official recording, so that Clerk Anne Retcher would not need to retype everything, but decided to stay on, for the record.

Pendleton asked Panas if the road is going to be expanded or just reconstructed, answer from Dennis Miller was that it will just be reconstructed, not widened.

Question 2 – “Is it being reconstructed to increase load capacity?” Answer from Miller – “I guess indirectly it will improve the ability of the road to carry loads, but that isn’t why we are doing it.”

Panas added, “It is more for the general health of the infrastructure, because right now it is very substandard to say the least.” Miller then stated, “Our intention isn’t to make it a haul route or anything like that. It is just to improve it back to the condition it was in prior to it being damaged by the construction traffic.”

Question 3 – “And does this project require environmental review for the federal funds?” Miller – “Yes and we would begin the study as soon as we are told that the funds are going to be available.”

Question 4 – “When would the project probably be completed?” Miller – “probably summer of 2023.”

Question 5 – “How was this project identified? What initiated this project? Was there a request by a person?” Miller – “The condition is fairly obvious if you’ve driven the road. It is probably one of the worst condition roads in Williams County.”

Hilkert added that the only one worse is CR 5 where they are doing the turnpike construction, with Rummel adding, “or 11.50.”

There were a few more comments on that and then Panas explained that a process had been taken in which County Engineer, commissioners, villages, and local municipalities put in requests for repair needs.

This road was mentioned often, as “everyone knows about it.” Williams County Engineer Todd Roth was the “specific entity” that reached out to MVPO for this road.

With no further discussion the commissioners took a short recess before going back into session for regular business. Approval was given for:

-Resolution 184 “In the matter of authorizing and directing the Chairman of the Board of Commissioners to submit the application for the Program Year 2022 Critical Infrastructure Program under the Community Development Program for CDBG.” (for Bryan/S. Lynn St. Waterline Replacement)

-Resolution 185 In the matter of authorizing and directing the Chairman of the Board of Commissioners to submit an application for Program Year 2022 Critical Infrastructure Program under Community Development Program.

Following another short recess, the Commissioners went back into General Session to hear an Airport Update from Brent Wilson, with Vicki Grimm, WC Auditor present in person and Julie Beagle from Auditor’s office via phone.

Wilson informed the Commissioners that the Hanger Project is underway, giving them specifics on a few previously discussed portions: from Bell Engineering, the layout currently proposed has been ordered; Emergency Management Authority will have two offices and a storage closet, being done Thiel’s with Starks and Owens figuring out the electric; separate heat unit and AC unit; all coming to about $76,000.

Wilson made a proposal to hire Delta Airport Consultants to document the construction of the portion of the asphalt ramp to the south of the hanger, in order for the county to be reimbursed.

If the county hires Delta Airport Consultants to document it all, they will “bring in an independent company that does the testing to make sure it meets the FAA specs.

They have a person there for 90 days so they will make sure that the concrete under the floor of the building, everything. Meets ODOT specifications.” The cost to the county to hire them would be $24,000 “to get back $216,000 on the project.”

Commissioner Hilkert added that Jeremy Suffel, with EMA, was involved in the meeting when the computer hookups, etc., were discussed. The hanger will be used in case of a major disaster in the county and EMA can use it.

Wilson said he hopes to be in the hanger by October 1 as he has a jet coming in that has already signed to be her for four years.

This makes it a total of three airplanes already set up to go into this hanger when it is built. They will pay overnight fees and all have the understanding that should there be an emergency, their planes would be out on the ramp.

The needs for the day were 1. Set up for drawing money for payments, 2. A change order for Thiel’s with the EMA of the $75,800 and 3. Determining if they want to pay Delta Airport consultant’s fee. Grimm and Wilson discussed a few financial details. There was some talk of income from fuel sales and Wilson said that it is already up and very helpful.

A motion was made and approved “to authorize the Airport Authority Board to engage with Delta on this project.” Wilson spoke of some of the repairs that are being done at the airport and money that has gone out for those, alerting the auditor’s office that they might get “dinged” by the FAA when they do inspections.

Also, “the current administration in the White House is giving all of us an addition besides our $150,000 that we get every year allocated to our FAA funding, an additional $159,000 that we can use to purchase equipment. So, we are going to purchase our own snowplow equipment in October, apply for that.”

“It is going to be basically a tractor with a loader on the front of it that will have a push blade or a hydraulic blade to help take care of the runway…it will also buy a broom to broom the runway that will run off the front of the tractor at the same time from the back side.” It can also be used in the summer to pull the batwing mower that they borrow.

The last thing he mentioned was that the old hanger has to be removed, it will need to be done by in house and he sees that as a plus, since the grant paying for the new tractor states they have to keep it inside. Thus, the old hanger will now house the mowers, broom and tractor.

The commissioners approved a motion for a Change order for Thiel Construction to include the EMA. With no further business they adjourned for the day.