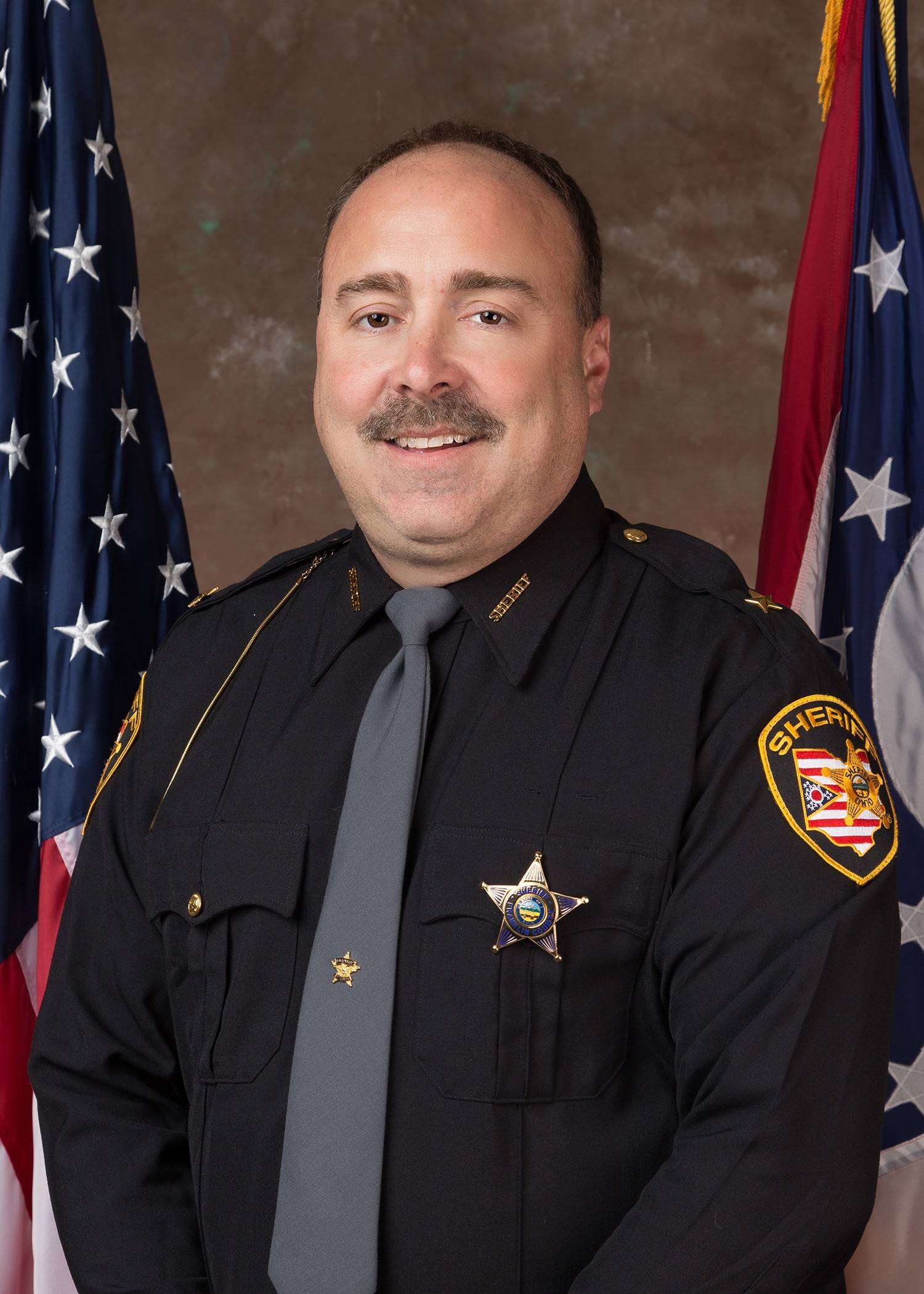 BRYAN, OHIO – William County Sheriff Steven Towns will resign his office effective March 17, 2020 as part of a negotiated non-prosecution agreement where he will avoid being charged with three felony theft in office charges.

Special Prosecutors Mark R. Weaver and Ryan M. Stubenrauch had tried and convicted Towns of a first-degree misdemeanor charge in November of last year and Weaver and Stubenrauch led the more recent felony investigation that resulted in today’s resolution.

Following his November conviction, Towns appealed. Such an appeal requires the defendant to pay a court reporter to type up and prepare a transcript of the entire trial, to be sent to the appeals court. The prosecutors, aided by agents from the Ohio Bureau of Criminal Investigation (BCI), uncovered evidence that Towns submitted the invoice for the creation of this transcript to county officials, for payment by taxpayers. Such a payment is improper and constitutes fourth degree felony theft in office.

Prosecutors and investigators also determined that Towns improperly directed one of his deputies to attend and assist at Towns’ criminal trial in November as well as Towns’ Board of Elections hearing last month.

The deputy was paid for the hours he attended those proceedings, despite the fact there was no official government purpose for the deputy to be present. Both of those instances constituted fourth degree theft in office, since the money paid to the deputy was used for the personal benefit of Towns.

As part of the agreed resolution of the felony charges, Towns will not be convicted on the charges. In return, Towns agrees to resign from office effective March 17, 2020, repay taxpayers, from his own personal funds, the $2,349.28 in misspent monies for the transcript and the deputy hours, and forfeit his state certification that allows him to serve as a law enforcement officer.

In addition, he agrees not to seek employment within the state of Ohio at any law enforcement agency or any detention facility such as a jail or prison.

“Steven Towns was convicted by a Williams County jury last November and we were prepared to charge him with much more serious crimes this week,” Special Prosecutor Mark R. Weaver said after the agreement was signed. “Rather than expend even more taxpayer dollars and law enforcement resources to prosecute him, we’ve decided that this agreement is a better outcome for the community and for Mr. Towns.”

Based on the details of the agreement, if Towns violates the terms in any way, the special prosecutors will immediately charge Towns with the three felonies and any other appropriate charges.

“There has been far too much chaos in and around the Williams County Sheriff’s office and this agreement will allow the county and the dedicated employees of that agency to move beyond it,” Special Prosecutor Ryan M. Stubenrauch noted.

Weaver and Stubenrauch offered praise for the professional and diligent work of the BCI agents who assisted with all of the issues surrounding the Steven Towns cases.

They also thanked Ohio Attorney General Dave Yost for assigning BCI to the matter and Ohio Auditor of State Keith Faber and his staff for providing technical and expert advice during the investigation.

Towns remains on probation, with 180 days of jail time suspended, based on a sentence handed down by visiting Municipal Court Judge Dwight Osterud last November. 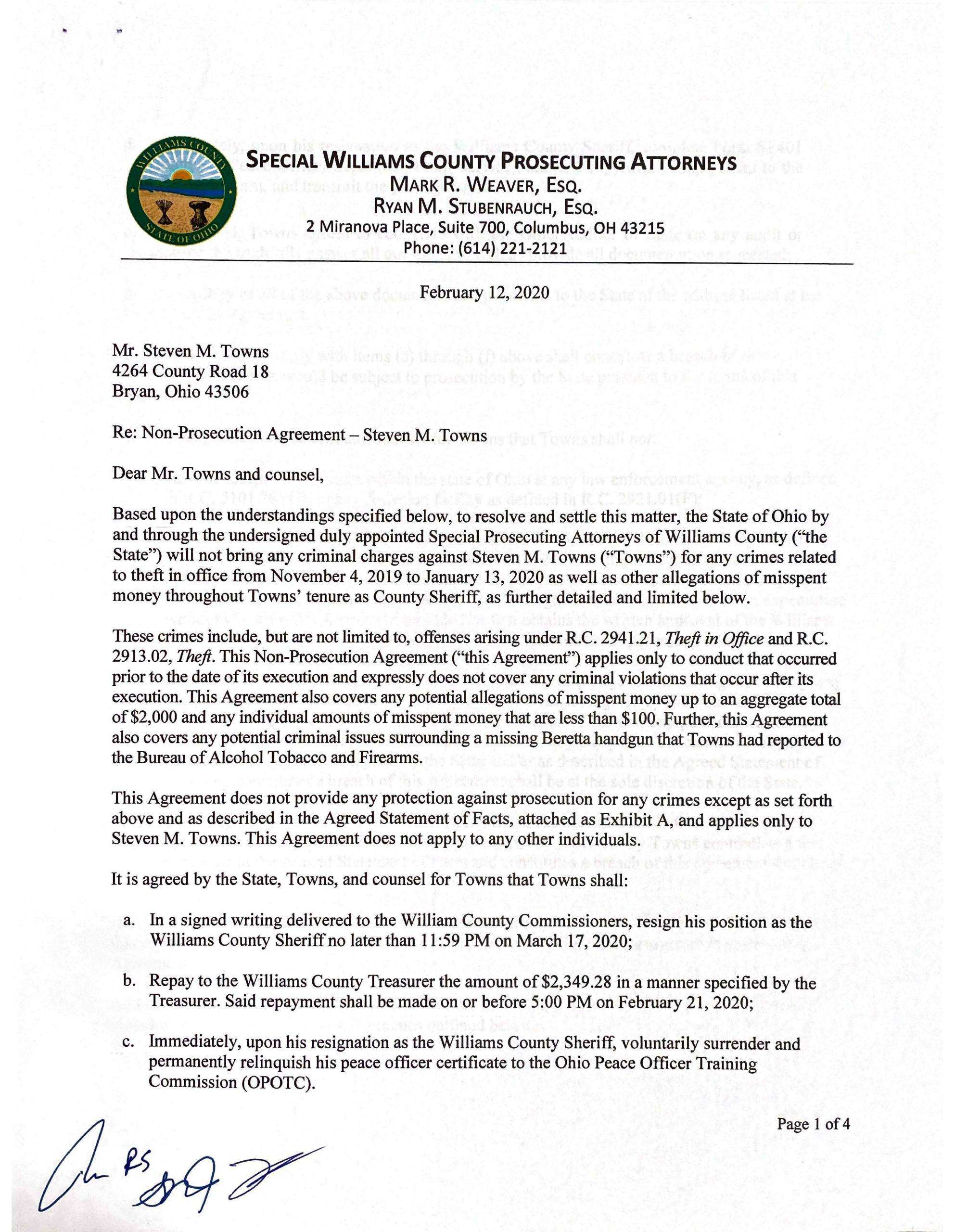 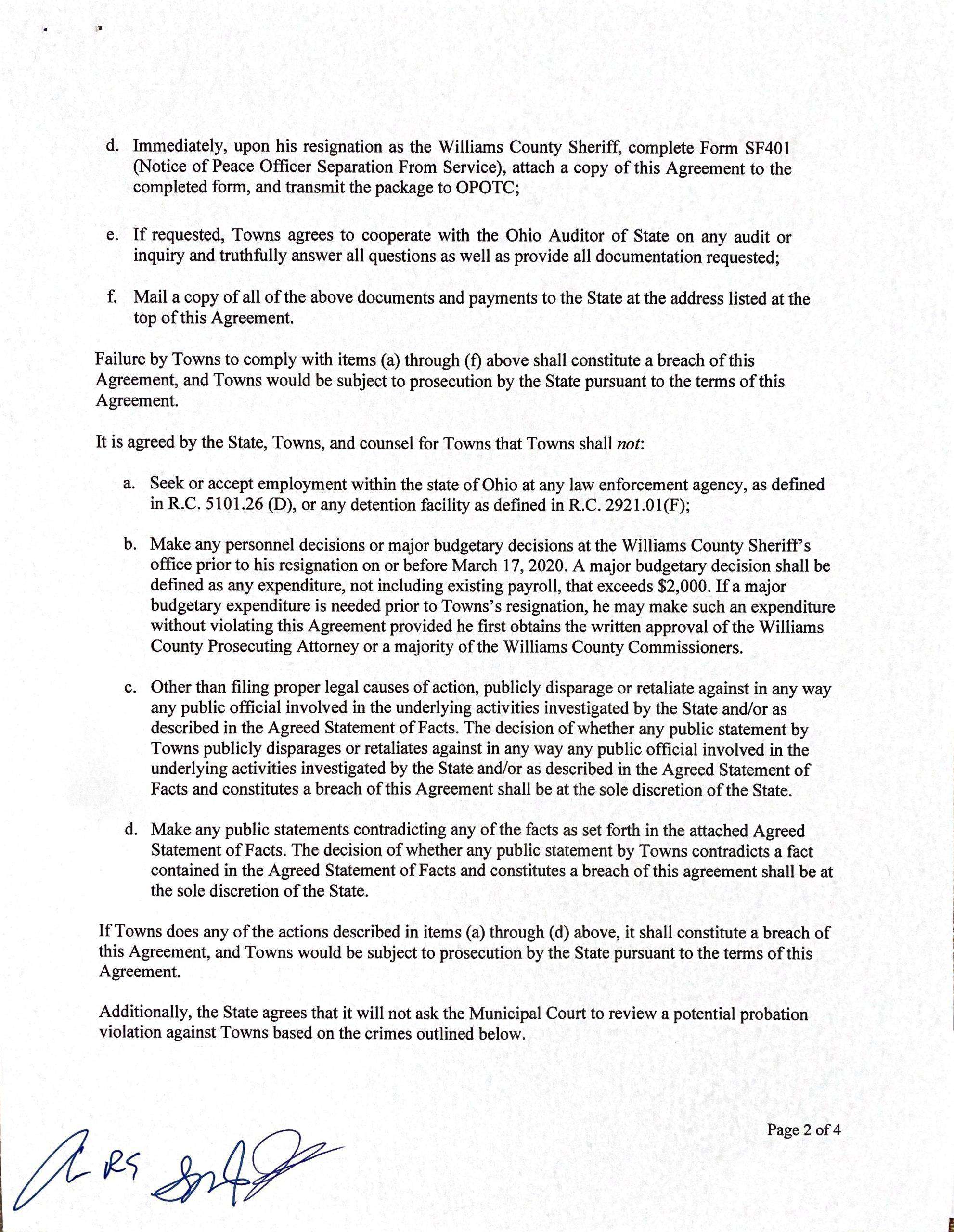 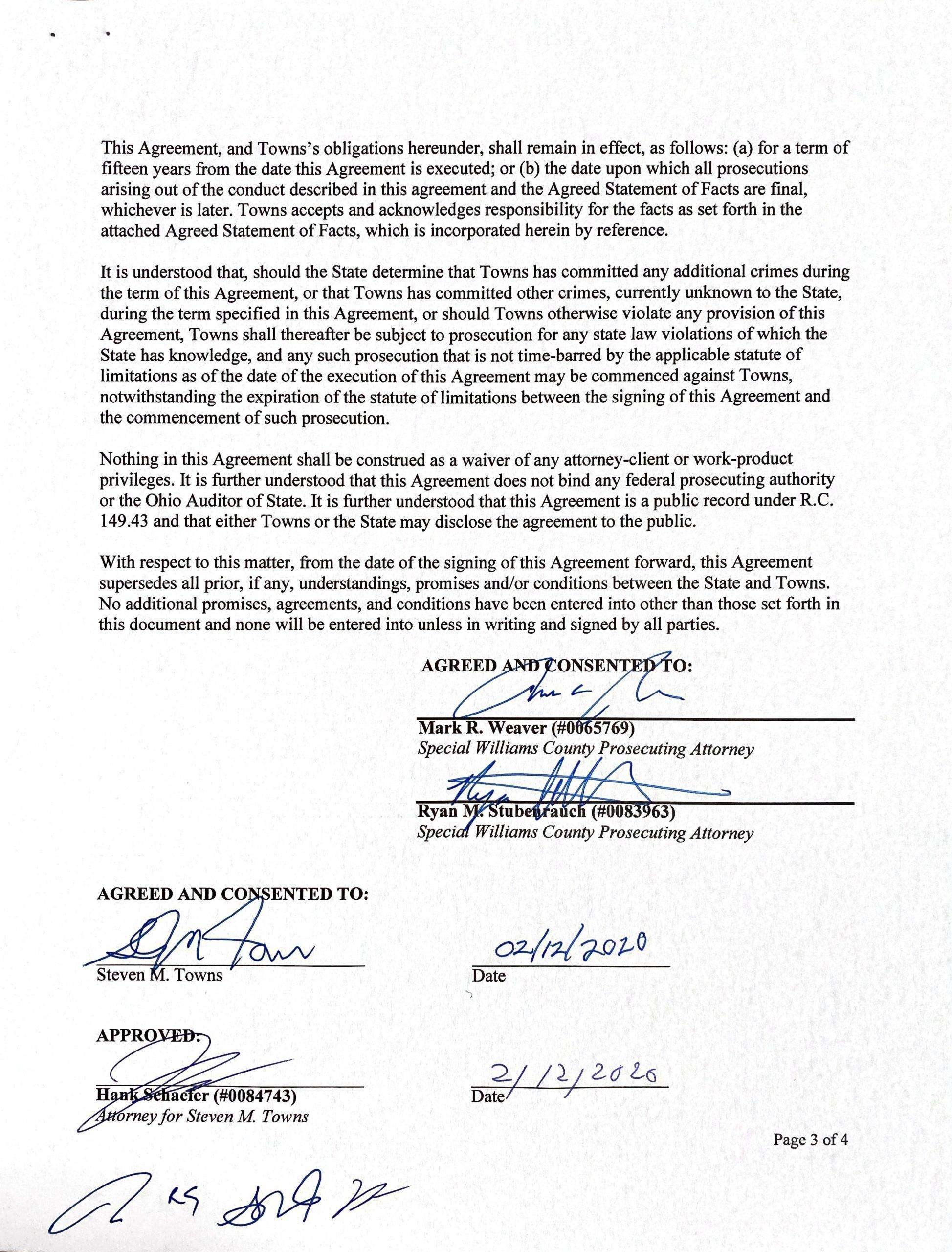 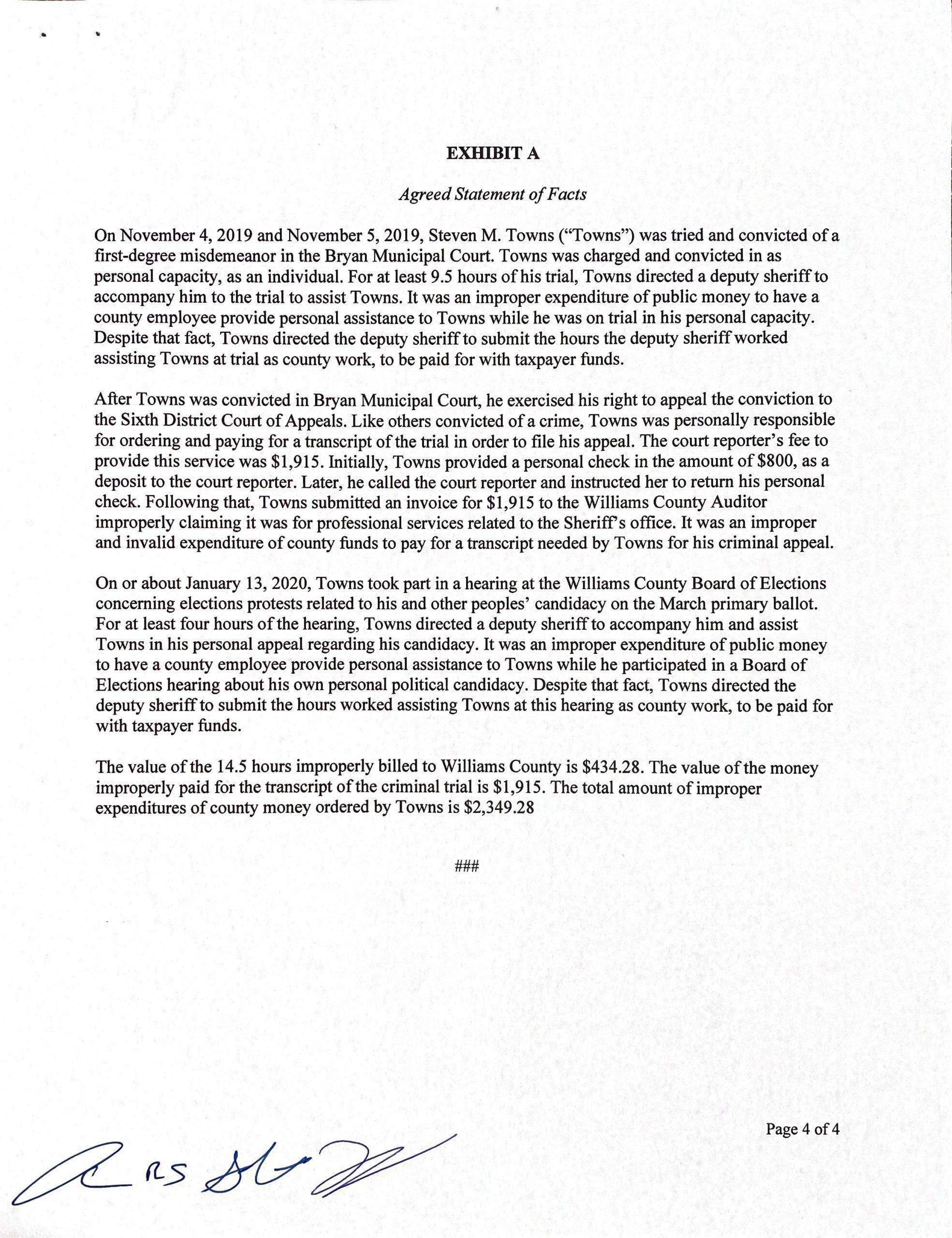