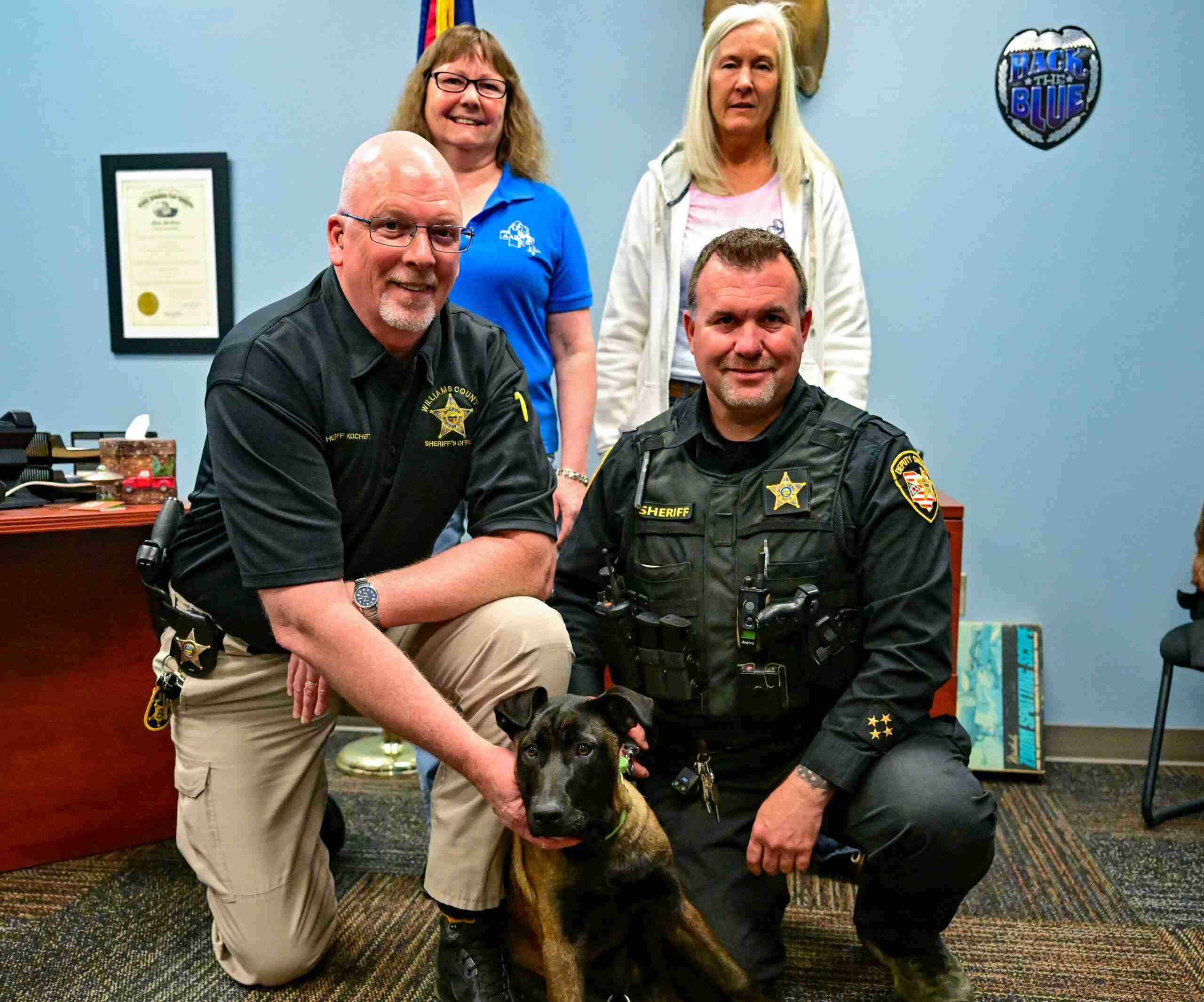 K9 MICK … Sheriff Kochert and Deputy Jacob kneel down next to new K9 Mick. Standing behind them is Sally Geer and Elesa Brenner. (PHOTO BY JACOB KESSLER, STAFF)

The non-profit animal rescue, located in Coldwater, Michigan, has been saving animals since 2007. A local foster by the name of Elesa Brenner gave the puppy a home after he was rescued from Texas.

The puppy, Mick, was rescued from a kill shelter in Texas. Mick had less than 12 hours to be rescued before he would been killed, when Animal Aid intervened.

After being brought up to stay with Elesa, she ran into Doug Cargle and a discussion took off regarding the possibility of him being a K9.

Animal Rescue Owners Sally and Wayne Geer explained that once they heard there was a chance he could be used as a K9, they were excited.

“Elesa said she talked to one of the deputies and that they would want him. It’s wonderful to help law enforcement. I think these guys are going to make a great home for this dog and I am excited to see how he does,” said Sally Geer.

After speaking with Elesa Brenner, Doug Cargle called over and spoke with Sheriff Kochert and told him that there was a dog that he may be interested in.

Sheriff Kochert explained that he sent one of his K9 Deputies, Ken Jacob over to her house to look at the dog. Immediately it was clear to Deputy Jacob that the dog was going to be a good fit, so he called over to Sheriff Kochert and told him that it was a good-looking dog.

After hearing of the potential that the dog had, Mick was sent over to be evaluated by Master Trainer Sgt. Bob Theurer at the Fort Wayne Police Department K9 Certification Academy.

Sheriff Kochert explained that Sgt. Theurer has helped the department out immeasurably and that he is one of the best trainers around.

Sgt. Theurer gave the department the green light for Mick which has now led to a future for Mick with the Williams County Sheriff’s Office.

Mick also has more significance due to his name. His name was Mick before ever coming to the Sheriff’s Office. This significance comes from the fact that K9 Deputy Mick Frisbee passed away on May 24th, 2019.

Deputy Frisbee was with the department since 2001 and was a K9 Deputy for 12 years with partners Hammer and Ozzy.

“We were all dumbfounded when we found out what his name was. Along comes this puppy with the name of Mick and it, well it held a lot of significance for all of us here,” said Sheriff Kochert.

After finding out that Mick was trainable and would be a good fit for the K9 program, the Sheriff called over and asked how much they would need to pay for Mick.

“They told me that if we were going to use him as a K9, it would be a donation and we wouldn’t have to pay for him,” stated Sheriff Kochert.

He also explained that this was very significant because normally these pure-bred puppies are priced at $7,000.

Mick is currently four months old and is not yet ready to start his training as a K9 Deputy. For the time being, he will work with deputies until his new partner is chosen which should done by the end of summer.

After that, Mick and his human partner will work together on bonding before they both head over for a 12-to-14-week training.