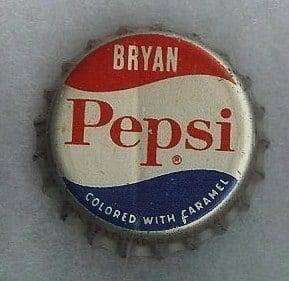 (1958): Ground was broken for the new 11,000-square-foot Pepsi-Cola Bottling Company plant at Edgerton and Emmett streets in Bryan.

Its products were distributed in Williams, Defiance, Henry, Fulton and Paulding counties. This vintage image of a Bryan Pepsi-Cola bottle cap is from the Kevin Maynard collection–Courtesy of the Williams County, Ohio, Local History Exchange.