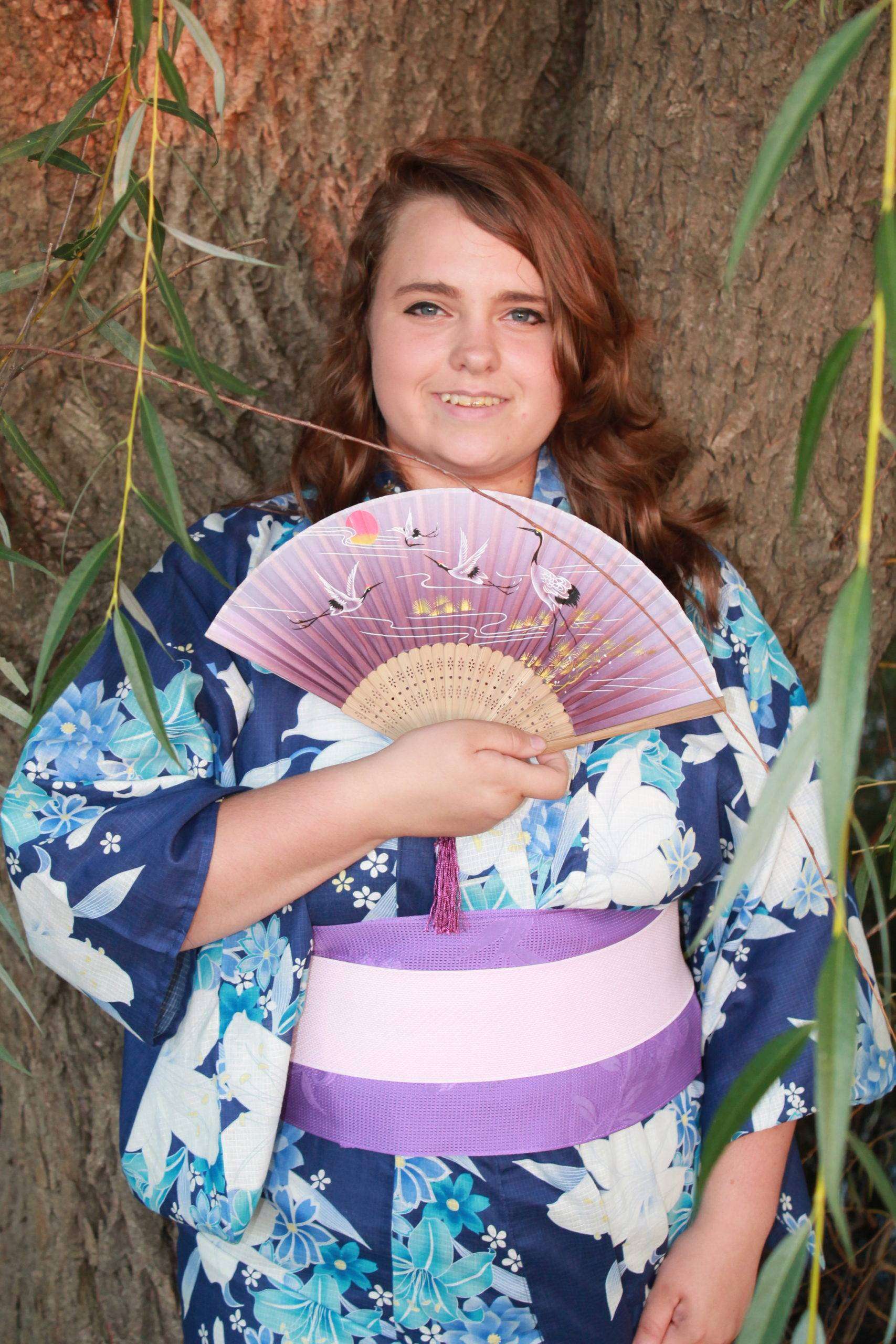 HEADING TO JAPAN … Annie Gamber of Wauseon will soon pursue her career goal of being an interpreter through a two-month excursion in Japan through the 4-H program.

Annie Gamber, a senior at Wauseon High School, will soon realize her dream of experiencing the Japanese culture first hand thanks to the generous support from the 4-H program and greater community.

The ten-year member of the Becoming Leaders of Tomorrow 4-H club in Fulton County will embark on the journey to Tokyo, Japan on June 13 and return home on August 9, immersing herself in language studies and exploring the culture of the country for two months.

Gamber’s interest in the culture and language first sparked three years ago through watching anime- popular Japanese hand-drawn and computer animated cartoons. When she began watching shows in Japanese with English subtitles, she was intrigued. “I thought I would like to get to know how to actually understand this by itself. I started learning slowly, and this year I’ve started to get hardcore,” she said.

Since then, she’s started studying the language with the aid of classes available through the Wauseon Virtual Academy in addition to attending Rosetta Stone learning sessions through the Fulton County Job & Family Services. Gamber also met a student who has been studying the language for seven years at last year’s county fair and has been learning with him ever since.

Although Gamber will be the only one representing the Northwest Ohio region in this year’s program, she’ll be sharing the experience with six other 4-H members from across the state. The selection process for the program consisted of a 28-page application and three written essays. However, Gamber rose above many applicants due to her infusion of her passions for Japan and 4-H already, according to Fulton County 4-H Extension Educator Kayla Miller.

“She’s taken several different projects related to Japanese culture. Some of them are what are called self determined projects. They’re a self self-guided project where the youth really determines what they want to learn. It takes a lot of personal drive, and Annie did a great job with her project. I heard a lot of good things about it from our project judging volunteers,” Miller said.
Ohio 4-H offers the program in partnership with Labo International Exchange, an organization dedicated to teaching foreign languages and cultures to Japanese youth. Japanese young people learn about a country’s culture and perform songs and stories in the language they are studying.

Likewise, Gamber will spend the first month abroad with the other contingent members studying Japanese in the Labo program for four days a week and while Fridays will allow students to explore the culture in Tokyo. The second month will be spent with a different host family in full cultural immersion, making the award-winning Ohio 4-H International excursions, which has sent over 244 students and chaperones to Japan over the last 38 years, unique from other exchange initiatives, adding even more value to the 4-H program.

“I believe 4-H has helped me to speak up and learn how to talk to people, where a lot of other kids don’t know how to do presentations and get nervous about it. As a 4-H member, you’re taught how to do that,” Gamber said.

The opportunity is open to any 4-H member in Fulton County at least 14 years of age. Gamber’s leadership roles and involvement as a camper and counselor at 4-H Camp Palmer has also prepared her for the journey and to be an ambassador of the county.

“She’s taken advantage of a lot of our older youth opportunities that many of our 4-H members don’t take advantage of. She’s truly been an exemplary person to promote all that 4-H has to offer locally in Fulton County,” Miller said.

The initial cost of the program for Ohio participants was $3,600. Although Gamber has received scholarships through the state, in part by hosting a Japanese student in her home last summer, that have slimmed down the cost some, she still has over $1,000 to go before taking flight.

To help pay for the trip, she’s partnering with Funds2Orgs, an Orlando-based organization that repurposes used footwear to send to those in poverty in developing nations across the world who have an ambition to start micro-businesses. Donated shoes also aid victims of recent disasters like Hurricanes Harvey, Irma and Maria and wildfires in California.

“In developing countries, families that receive items from Funds2Orgs collection efforts are families who have little to no income or livelihood. These items, and the ability for them to be resold, represent micro-enterprise opportunities for families and their communities- offering a real opportunity and possibly the only chance at true self-sustainability,” said Yvonne Keller, Funds2Orgs’ Vice President of Operations.

Community members may drop off pairs of shoes to collection boxes at the Archbold or Delta Community Libraries, Wauseon Public Library or Trinity Lutheran Church of Wauseon. Gamber’s goal is to collect 2,500 pairs of shoes, at which point she’ll earn $1.00 per pound of shoes collected. Donations can also be made to an account in her name at Farmers & Merchants State Bank or to the Ohio State University Extension Office of Fulton County.
Miller hopes the experience will strengthen the bond between the 4-H international programs, which offers trips to other countries like Costa Rica, Findlay, and Norway, and the Fulton County area, saying “I hope that youth will see Annie and her travelling and see how she benefits from this … I think she’ll have a very profound impact on the youth in Fulton County, showing them that there are opportunities to travel and get out there and do things outside of the county, and they’re available through 4-H.”

The trip also creates an opportunity for Gamber to fulfill her career goal of being a Japanese interpreter in the U.S. or abroad. On occasion, the Japanese Labo program offers year-long internships to participants that excel in the initial cultural experience.

For anyone aiming to pursue their dreams, Gamber offers a few words of wisdom: “Just keep going through it. If it’s something you really enjoy, go for it. Some people may not believe in you no matter what, but keep doing what you can and really find your resources to make it happen.”