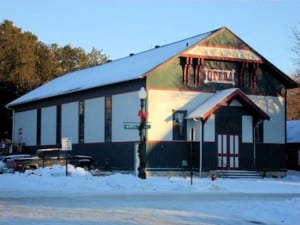 Fayette, Ohio – The fifth program of the Fayette Art’s Council’s 2012-13 “Passport to Great Entertainment Series” will be presented on Saturday, February 23rd at 7:30 p.m. in the Rorick Gallery at the Fayette Opera House.

The program will feature the story of Amelia Earhart as presented by Cleveland area actress Carol Starre-Kmiecik.

Amelia was an American aviation pioneer and author. She was the first female pilot to fly solo across the Atlantic Ocean and received the U.S. Distinguished Flying Cross for this record. She set many other additional records and wrote best-selling books about her flying experiences.

Earhart was also a member of the National Women’s Party, and an early supporter of the Equal Rights Amendment.

This remarkable pioneer disappeared over the central Pacific Ocean near Howland Island on July 2nd of 1937. Her life story has been told many times and the public remains fascinated with her life, career and disappearance to this day.

Carol Starre-Kmieck has been performing on stage for over thirty five years. Her one woman shows focused on in-depth studies of famous American women has been performed throughout the region.

For her Fayette appearance, Ms. Starre-Kmieck will perform in the interment surroundings of the Rorick Gallery.

Season Passes and General Admission Tickets will be available at the door or may be reserved by calling (419) 237-3111 and leaving a request for tickets.