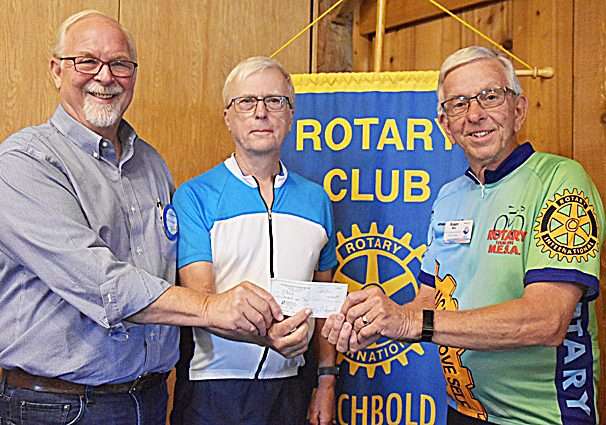 DONATION … Archbold Rotarians donated $1,000 to Rotary District 6600’s Medical Equipment and Supplies Abroad program. The presentation was made when Rotarians from across the district stopped at Archbold’s weekly luncheon meeting to explain why they are riding in this year’s 18th biking fundraiser. Over the years, it has raised more than $600,000 for MESA. Archbold Rotary president Luther Gautsche presents the check to Keith Lehman, an Archbold Rotarian who has participated in the bike ride for several years now, and Waterville Rotarian Randy Box, who coordinates the event.

What started in 2005 as a fun way to raise money for Rotary District 6600’s Medical Equipment and Supplies Abroad (MESA) program has turned into an annual event, a 5 or 6 day bike ride across various regions of District 6600 (which stretches from Indiana and Michigan to the counties just west of Cleveland and to a little south of Lima) to share the story of MESA to Rotarians across the district and raise funds in the process.

That first bike ride went all the way to Chicago and Rotary’s annual convention that was celebrating the 100th anniversary of the organization’s founding.

During that time, the riders have raised more than $600,000 for the program that collects used, but still usable medical equipment and supplies from healthcare facilities across the district that are upgrading.

The items are then shipped to Rotary clubs in countries in Central America, West Africa and Eastern Europe that can use it. Earlier this year, MESA shipped a container of supplies to Ukraine.

This year’s MESA bike ride is touring the northwest portion of the district. The riders left Fostoria on Sunday, June 19 and then headed for North Baltimore, Bowling Green and Perrysburg to meet Rotarians in those communities before taking the tour to Toledo, Maumee and Waterville Rotary clubs on Monday.

Tuesday’s stops included Wauseon, lunch with Archbold Rotarians and then Stryker, Montpelier and Bryan to stay overnight with Rotary families there.

Wednesday’s stops included Hicksville, Antwerp and Defiance (overnight) before heading east on Thursday for Napoleon and Bowling Green with Friday’s return to Fostoria, where MESA owns a warehouse to store all of the donated items until a container(s) can be packaged for destinations that have a special need for the materials.

One of the riders told Archbold Rotarians that he especially recalls when MESA received nine kidney dialysis machines from a hospital that was upgrading and planning to dispose of their used and somewhat dated machines until Rotary asked if they would donate them to MESA.

That’s why, he explained, he has ridden in all of the bike rides for MESA.  “You know what you’re doing is changing lives overseas,” he said.

Randy Box, a Waterville Rotarian and coordinator of the MESA bike ride, said, “We recycle good, used equipment that has been retired from service here in Ohio.  At our warehouse, we inventory and ship the equipment and supplies to a Rotary Club in an underserved area of the world. ”

“There, the Rotary Club supervises the distribution of this equipment to clinics and hospitals in their area.” Box said the goal of this year’s ride is to raise $60,000.

Archbold Rotarian Keith Lehman has participated in several rides in the past.  This year, he again challenged his fellow Rotarians by offering to match up to $500 to MESA.

He presented MESA with a check for $1,000 before joining them for the last four days of the ride.