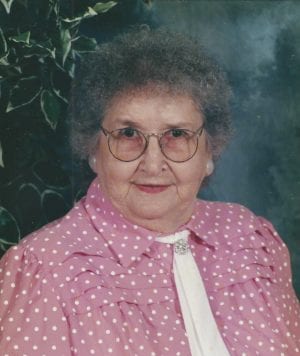 Betty Jane Whitman, 93 years, of Bryan, passed away Friday afternoon, February 17, 2017 at Hillside Country Living, Bryan. Betty was born March 20, 1923 in Bryan, Ohio, the daughter of the late Gaylord and Lela Fay (Severence) Kittredge. She married Lawrence R. “Shorty” Whitman on May 30, 1940 in Angola, Indiana, and he preceded her in death on January 4, 2006.

Betty was a homemaker, devoted to the care of her family. She attended Melbern United Methodist Church. She loved her family, especially all the babies over the years. She enjoyed crocheting, making afghans and dishcloths, working word puzzles, watching westerns, going fishing and cooking up all the bluegill she caught. She was mostly known for her big meals she prepared, especially her fried chicken dinners with all the fixings.

Those planning an expression of sympathy are asked to consider memorial donations be given to Melbern United Methodist Church 03739 County Road 9, Bryan, Ohio 43506.

To send condolences to the family or to share your memories with the family, please visit Betty’s obituary page at www.oberlinturnbull.com