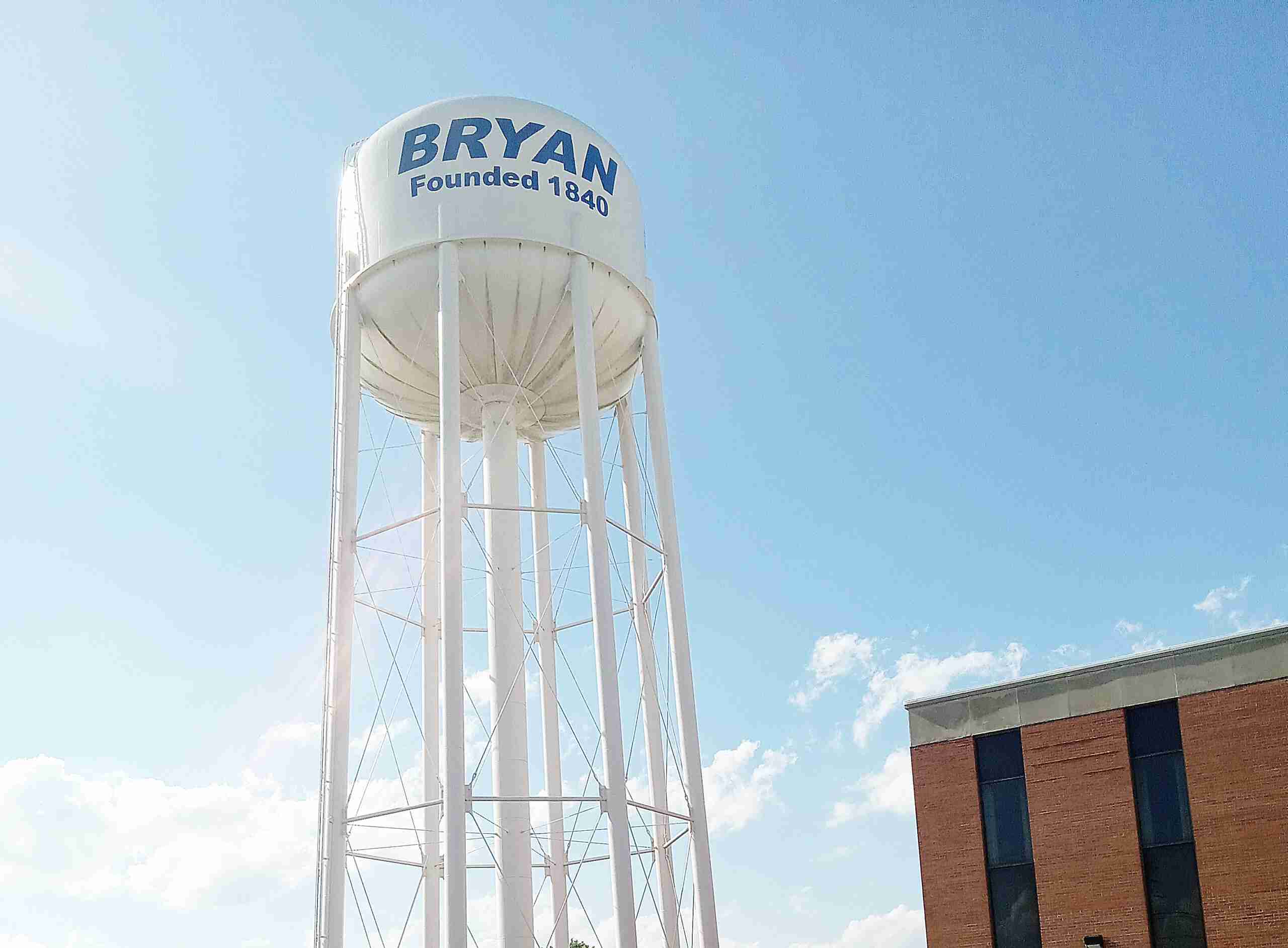 PAINTING PROJECT … Come September, the Bryan water tower will get a face-lift, with the eight most popular Dum Dums suckers being painted on the water tower. (PHOTO BY DANIEL COOLEY, STAFF)

First, council approved the minutes from the June 21 meeting.

Bill Martin of Spangler Corporation then talked about the water tower project. The new water tower will contain a painting of the top eight flavors from Spangler’s Dum Dums.

Eric Henn will do the painting and Spangler’s will cover his costs. Spangler’s will also provide a $25,000 contribution towards Bryan Municipal Utilities’ (BMU) painting project and for future maintenance. Spangler’s also intends to provide a viewing platform for viewers to take photographs and “selfies”.

Base painting will take place first, then, hopefully, Henn will start his painting in late September.

First, council approved the treasurer’s report. Council then approved Ordinance 37, a replacement levy for improvements, which will run for 9.5 years, ending December 1, 2032.

Council then approved Ordinance 38, similar to Ordinance 37, which will put the language back on the ballot. It will then be sent to the state.

That was followed by council approving Resolution 40, accepting a narcan overdose reversal kit for K9s in the Bryan Police Department, in the event of opioid exposure.

Council then approved Resolution 41, putting forth an agreement between the city of Bryan and the International Association of Fire Fighters.

That was followed by council approving a building permit. This will be a replacement of the existing fire alarm system at Parkview Medical Center.

Next, Mayor Carrie Schlade talked about a letter she had received from the Williams County Humane Society, which will no longer be able to trap feral cats. Mayor Schlade asked Rhonda Fisher to create an ordinance in regards to the letter.

The discussion surrounding that, upon request, Bryan residents would be referred to several choices for an outside private source, for trapping. Schlade recommended that people tag their cats, in case they get trapped, so that they can be identified.

In comments, Schlade thanked Spangler and was thankful for partnerships with a lot of businesses. She also commented that the city had a very successful weekend in the park, with lots of activities.

Schlade also mentioned that, thanks to the Parks Department, there is now an interactive fountain in Recreation Park.The fountain will be working daily, from 11 a.m.-11 p.m.

Hupe thanked everyone who worked on the fountains, thanks to Tommy Morr for his years of work, to Spangler’s for the water tower and thanks to those who put together the fire department contract.

Betts thanked BMU for their part on the water tower, to Parkview for their upgrading and thanks to the Parks Department for everything they do.