County To Apply For CDGB To Aid Edon’s Water Plant Project; Flag To Return Atop Courthouse 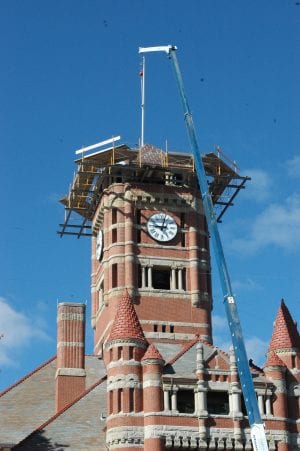 The village of Edon cleared another hurdle toward building a new water plant when the Williams Board of County Commissioners agreed to help.

The board will file an application for Community Development Block Grant funding to help pay for the new plant. The village is seeking $483,000 which is half of the required $966,160.

The village will build the new plant on the site of the current plant and will use the old plant for storage.

The village needs the county to file the application and serve as a conduit for the funding, Dennis Miller of Maumee Valley Planning Organization said at the Oct. 27 meeting.

“I will work with the village to make sure the federal rules are met,” Miller said. “This (project) will not count against the county’s competitive projects.”

The board passed a resolution which includes a letter of intent on the part of the village. The village has conducted an income survey which shows it qualifies for CDBG funds, Miller said.

The project will take 9-12 months to complete after the EPA signs off on the permit, Edon Administrator Randy Muhlman said.

Among the highlights, VRT has closed on the old APEX building on Union Street in Bryan and is opening a new manufacturing site. The company is a second-tier manufacturer and does the jobs other companies either don’t have the time or skills to complete.

“They do subcontractor work,” Davis said. “It’s a very aggressive young man who owns it.”

Work is ongoing for the wage and benefit survey for the county, Davis said. The window for companies to participate will be open for only another week, he said.

Davis met with other economic development organizations and said the feeling is the agencies will have to work collectively to succeed.

Participation in some local manufacturing-related events is high. About 25 guidance counselors and principals traveled in two vans to five different manufacturing sites to show officials the opportunities for their students. Davis also spoke at Bryan High School.

There are about four to five projects that could bring in 120 jobs over the next six months, Davis said. He cannot announce them at this time, but they are in the works, he said.

Courthouse project update
The scaffolding surrounding the courthouse spire will soon be coming down as the roof repair project nears completion.

Commissioner Lewis Hilkert provided a report from the project committee Oct. 27. The scaffolding will come down sometime this week with an eye toward raising the flag on the courthouse flag pole on Veterans Day.

The flag will rise at 8:30 a.m., Nov. 11, Hilkert said. The American Legion will be there to present the colors on the south lawn, he said.

The Bryan High School band will perform the national anthem at the bandstand.

“It will be a short event to commemorate the flag being back on the pole and to honor our veterans,” Hilkert said.

The commissioners will consider a request by the Dog Warden to take the van home for late-night calls.

Hilkert thought it was a wise idea and said the warden has put 600 extra miles on her car.

Alan Word said he wants to know how often she is called out overnight.