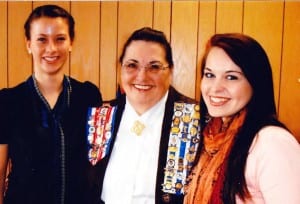 Scout David Williams chapter, Daughters of the American Revolution, met on Jan. 12 at the Wesley First United Methodist Church in Bryan at 1:30 p.m. Ten members were present, as well as prospective member Diana Evans and associate chapter member Charlene Hess. State Parliamentarian Rosanne Fisher presented the annual Good Citizens Awards. High school seniors are eligible to enter an essay competition in which they are given two hours to write on a topic not known in advance. Kelly Geis of Hilltop, daughter of Suzanne and William Geis, and Abby Hill of Edon, daughter of Richard and Rebecca Hill, both received DAR pins and certificates. Abby Hill was the winner of a $50 scholarship. The chapter will next meet on Friday, Feb.1 at 1:30 p.m. at the Thaman Building, Fairgrounds, Montpelier.