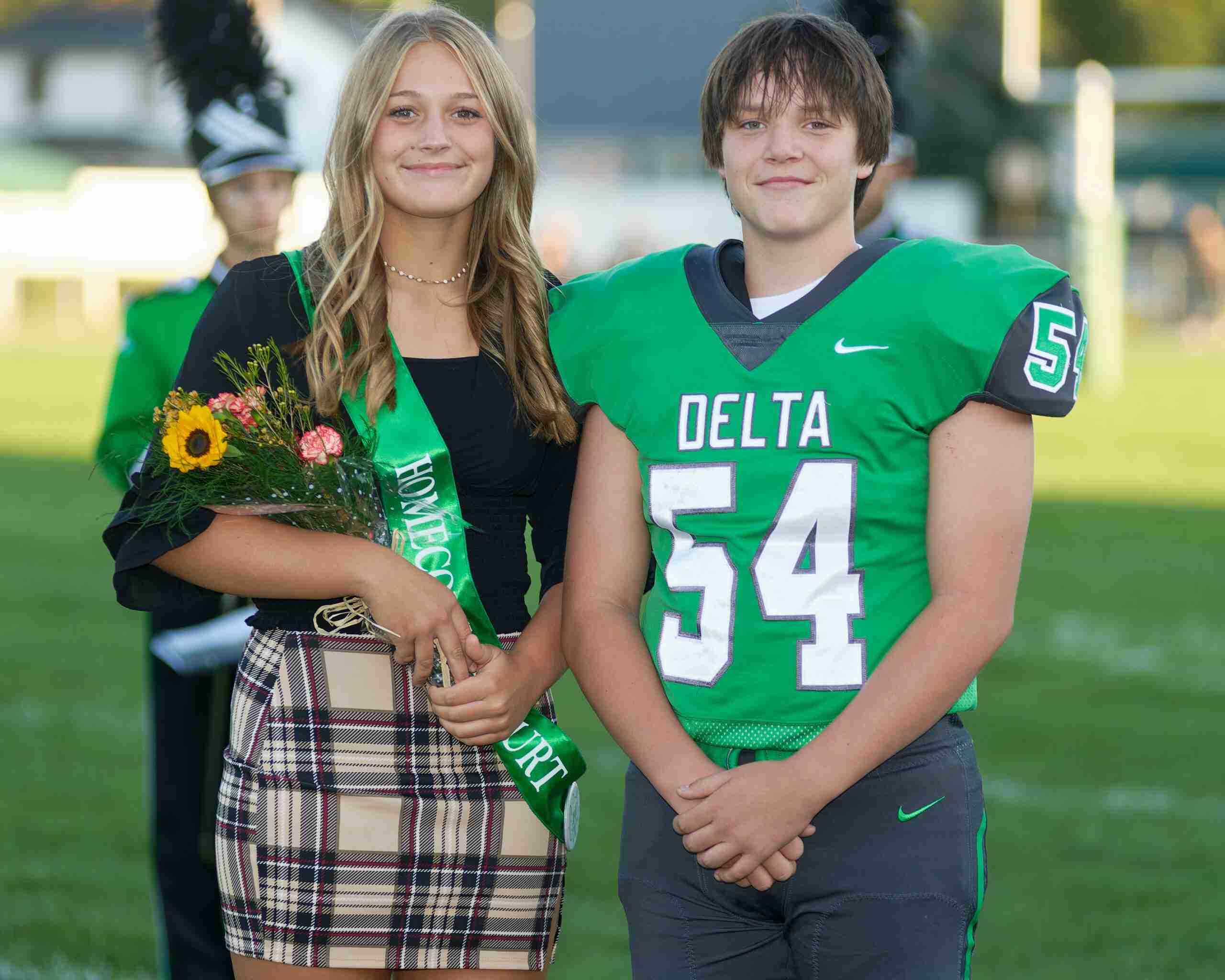 The Delta Panthers welcomed in Homecoming weekend with a parade before the game. The Delta High School band played as they walked down the road from the Highschool to the football field.

Members of the Homecoming court rode in cars for everyone to see them as they drove to the field.

Freshman attendant Kendall Sprow is a member of the soccer and basketball team. She also serves as the secretary of the freshman class, is a member of student council where she serves as the female athletic representative. She is also a member of the Spanish club, FCA, and the Youth advisory council. Her hobbies include swimming, playing soccer, basketball, hanging out with friends, tubing and being with her family at the lake. Kendal is the daughter of Tammy and Cory Sprow. Her escort was freshman Cass Chiesa, son of Kara and Chris Chiesa.

Sophomore attendant Ella Demaline is a member of the soccer, basketball, and softball teams. She participates in the Spanish club, FCA and indoor soccer leagues. She is also a certified lifeguard and a babysitter. She enjoys hanging out with her friends and going to the lake to go tubing. She plans on continuing to play soccer and going to college for a career in the medical field or becoming a psychologist. Ella is the daughter of Jodi and Adam Demaline. Her escort was Sophomore Xavier Worley, son of Tiffany Worley and Angel Jimenez.

Junior attendant Sophia Burres is a member of the varsity volleyball, basketball and softball teams. She participates in the Spanish club and enjoys spending time with her friends and playing sports. She plans on attending college to study nursing. Sophia is the daughter of Cora and Tom Burres. She was escorted by Senior Alex Hodge, son of Cynthia and Mike Pelton.

Junior attendant Khloe Weber is a member of the varsity basketball team and the Captain of this year’s varsity volleyball team. She also participates in the Kindness Club, Spanish Club, National Honor Society, and serves as the Junior Class representative on Student Council. She enjoys spending time with her friends and family, especially traveling with her dad. Her plans include attending college to pursue a degree in the medical field. Khloe is the daughter of Shane Weber. She was escorted by Senior Carson Chiesa, son of Kara and Chris Chiesa.

Senior attendant Gabriela Ford is a member of the golf, cross country and track teams. She is a member of the Spanish Club. She enjoys traveling and getting to know new people, see new places, and experience new cultures. Her plan is to attend college to study medicine. Gabriela is the daughter of Ludmilla and Stephen Ford. Her escort was Junior Nolan Risner, son of Liz Willis and Jay Risner.

Senior attendant Ashley Gill is a member of the varsity volleyball team and is the President of the Delta Highschool Band where she plays the clarinet. She also participates in the National Honor Society, Kindness Club, Student Council, Youth Advisory Council and holds a position on the leadership board. She also likes to practice nail art, jamming out to Taylor Swift and spending time with her friends and family. Her plans include attending college to pursue a degree in the health field while receiving a minor in business. Ashley is the daughter of Melissa Foster and William Bumside. She was escorted by Senior Rollin Robinson, son of Beth and Steve Robinson.

Senior attendant Samantha Maurer is a member of the varsity soccer team. She also participates in the Kindness Club, Spanish Club and the Life Teen Group at St. Casper’s Church. Samantha also coaches youth soccer and swim teams and enjoys hanging out with friends and family. Her plans include playing soccer at Siena Heights University and is studying to become a dental hygienist. Samantha is the daughter of Heather Sayen and Richard Maurer. She was escorted by Junior Bryar Knapp, son of Jamie Knauss and Doug Knapp.

2020 Homecoming Queen Ella Ford was active in the Spanish Club, Kindness Club, National Honors Society, and the Fellowship of Christian Athletes. She served as the Student Council President, and the Spanish Club President where she was also a class officer. She also participated on the volleyball, basketball, and track team. Currently, she is attending the Miami University where she is majoring in Biology. Ella’s advice to DHS students is to attend every event possible and to participate in them as much as you can. Ella is the daughter of Alicia and Doug Ford. Her escort was Junior Jerremiah Wolford, son of Jenny and Jeff Wolford.

On the football field, Ella Ford crowned the new Homecoming Queen Samantha Maurer. After being crowned, Samantha and the other two Senior Attendants stepped forward and congratulated each other. 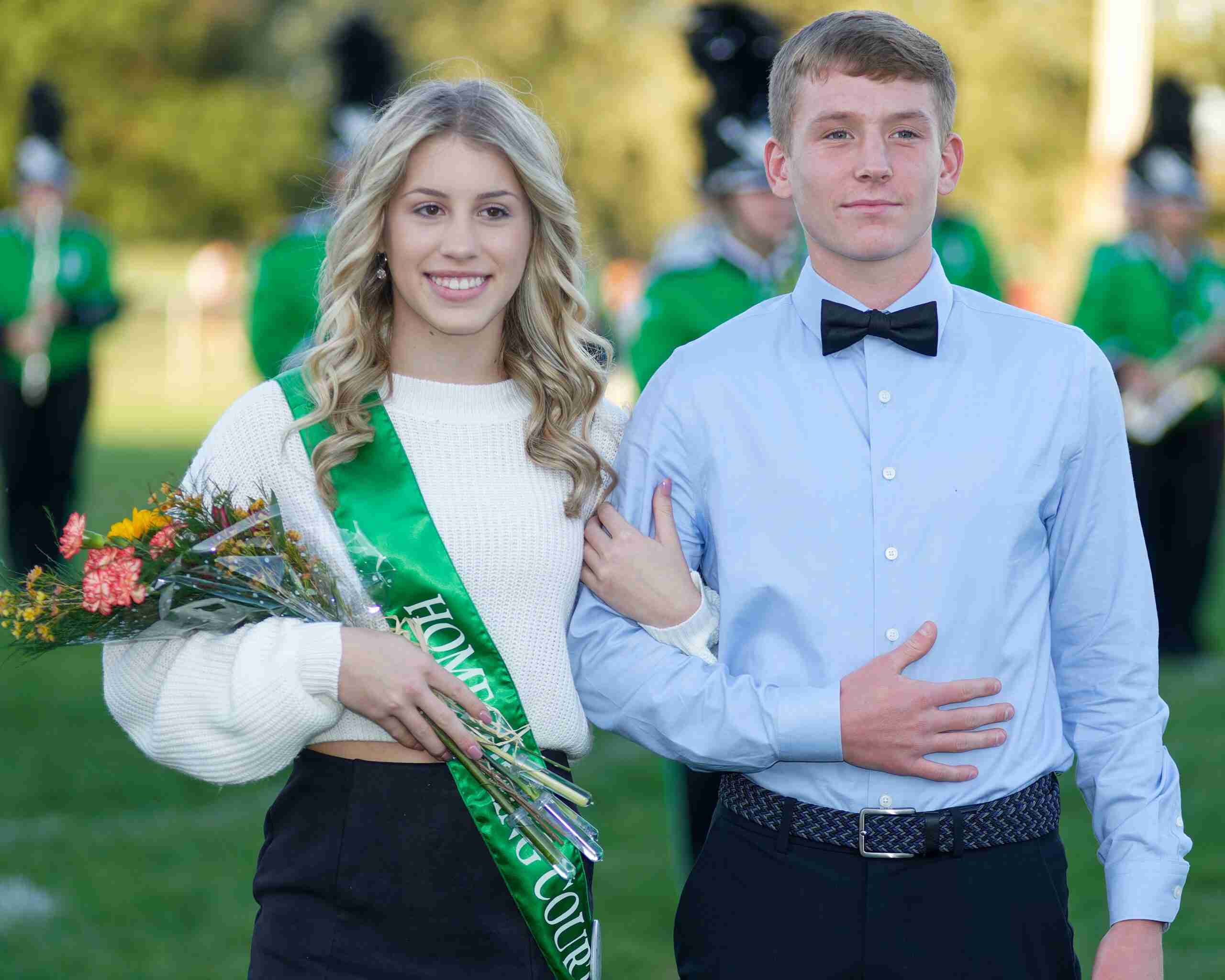 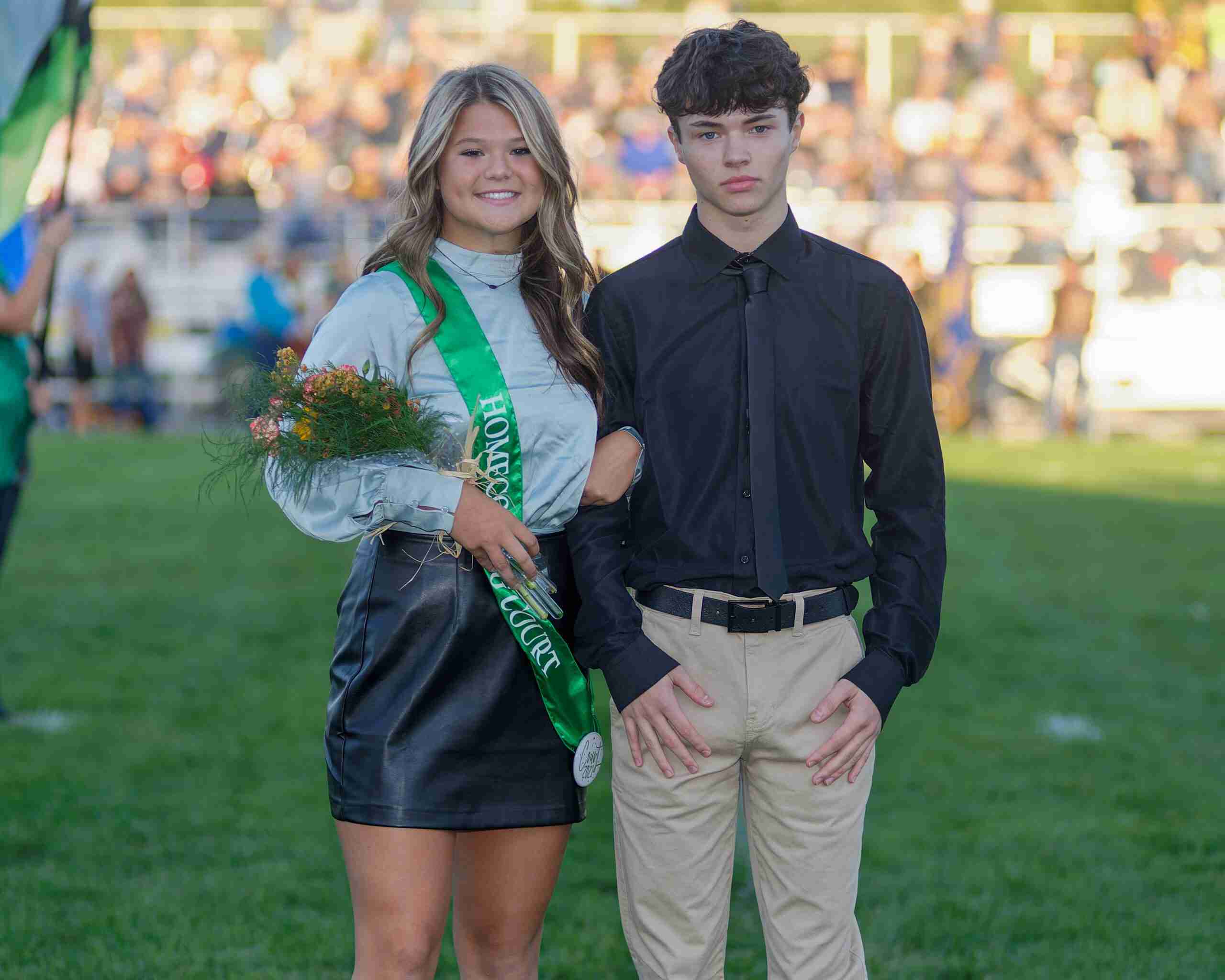 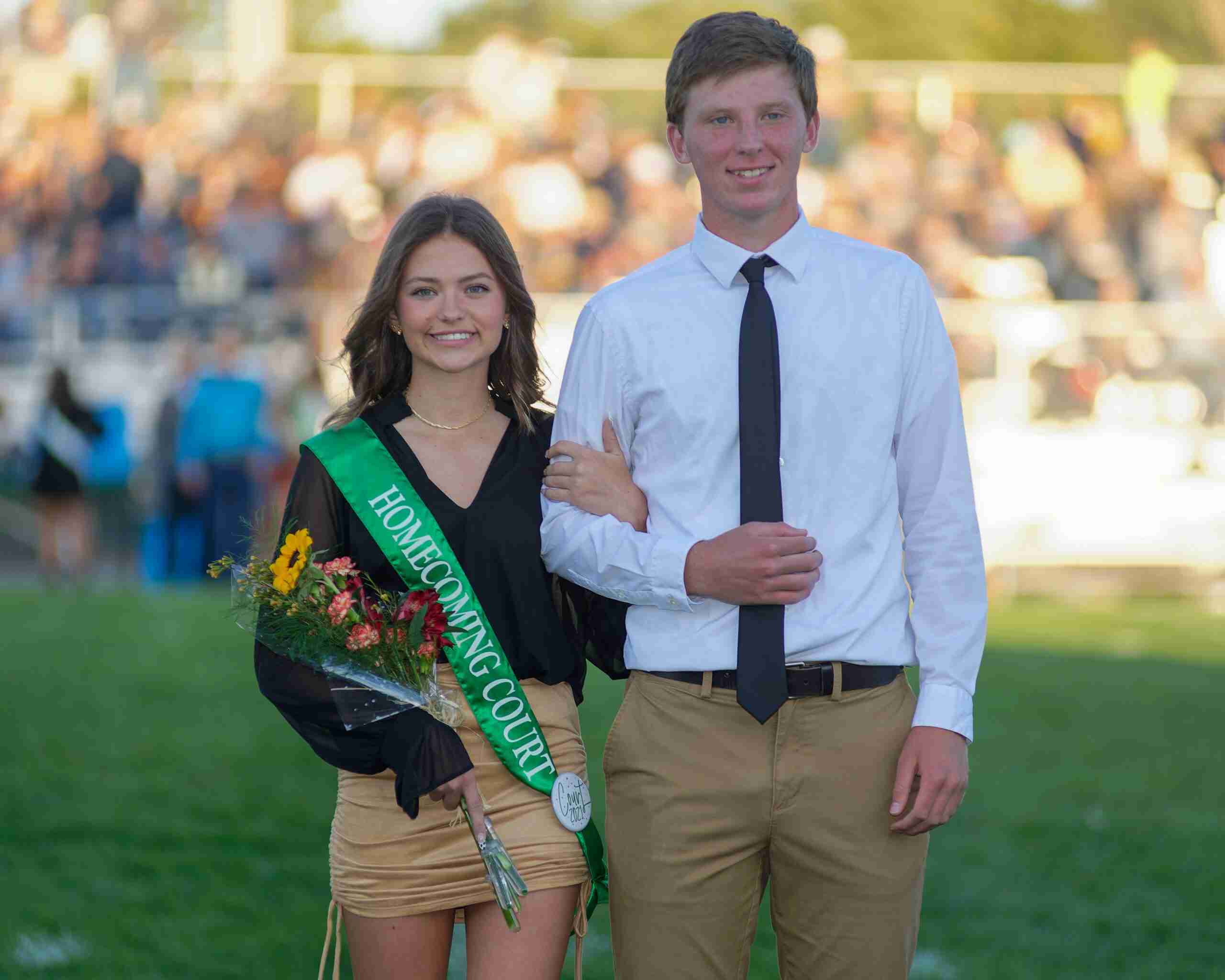 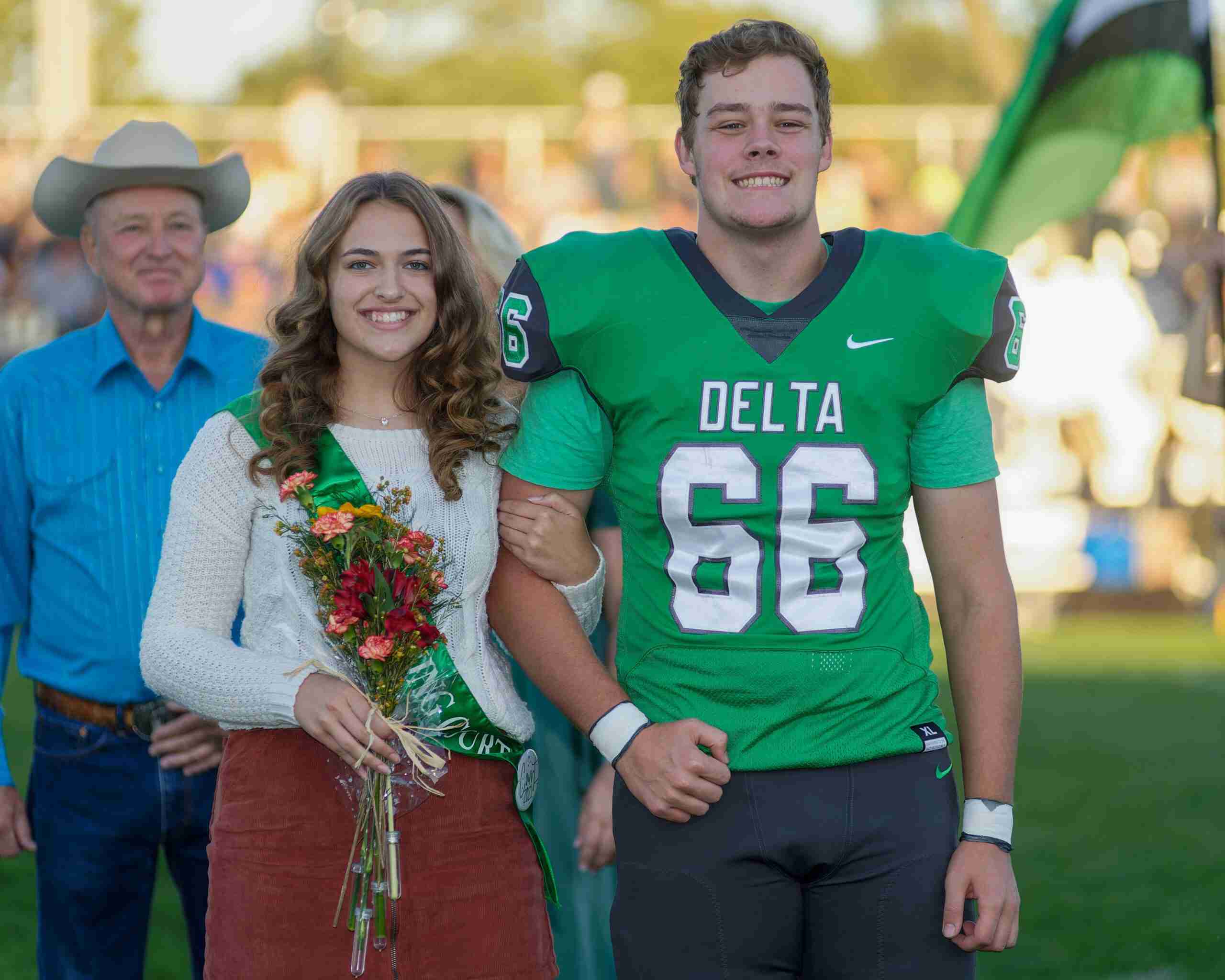 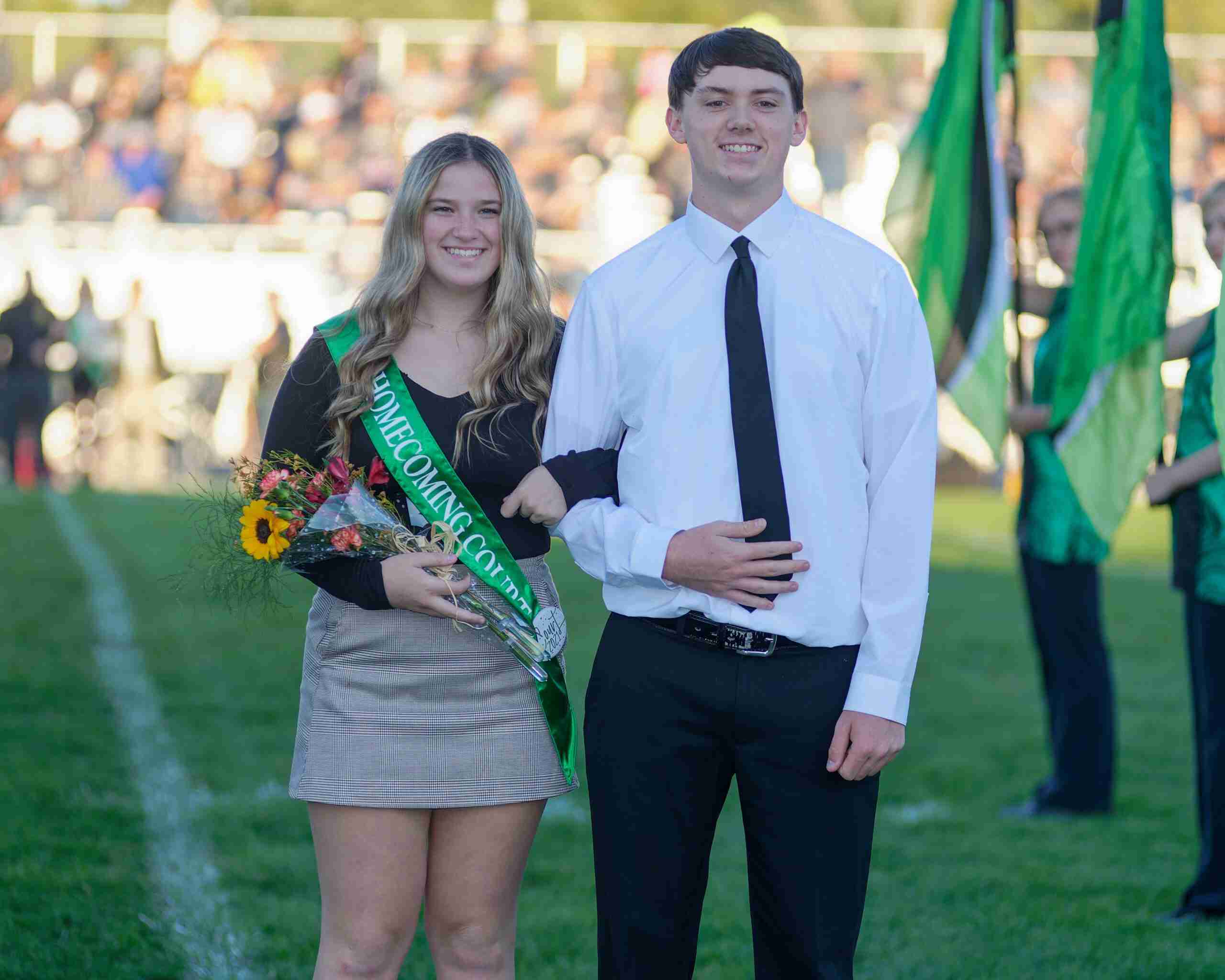 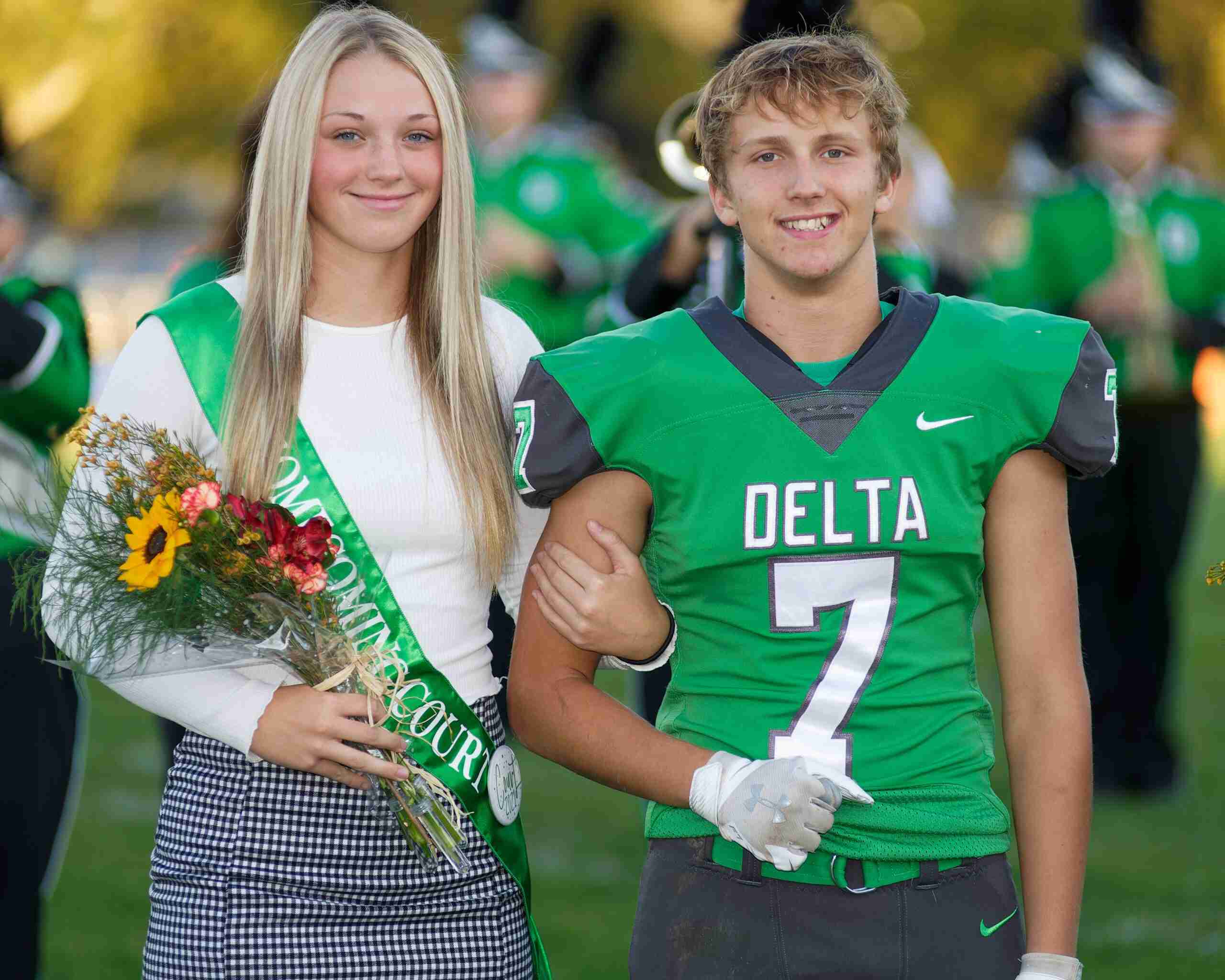 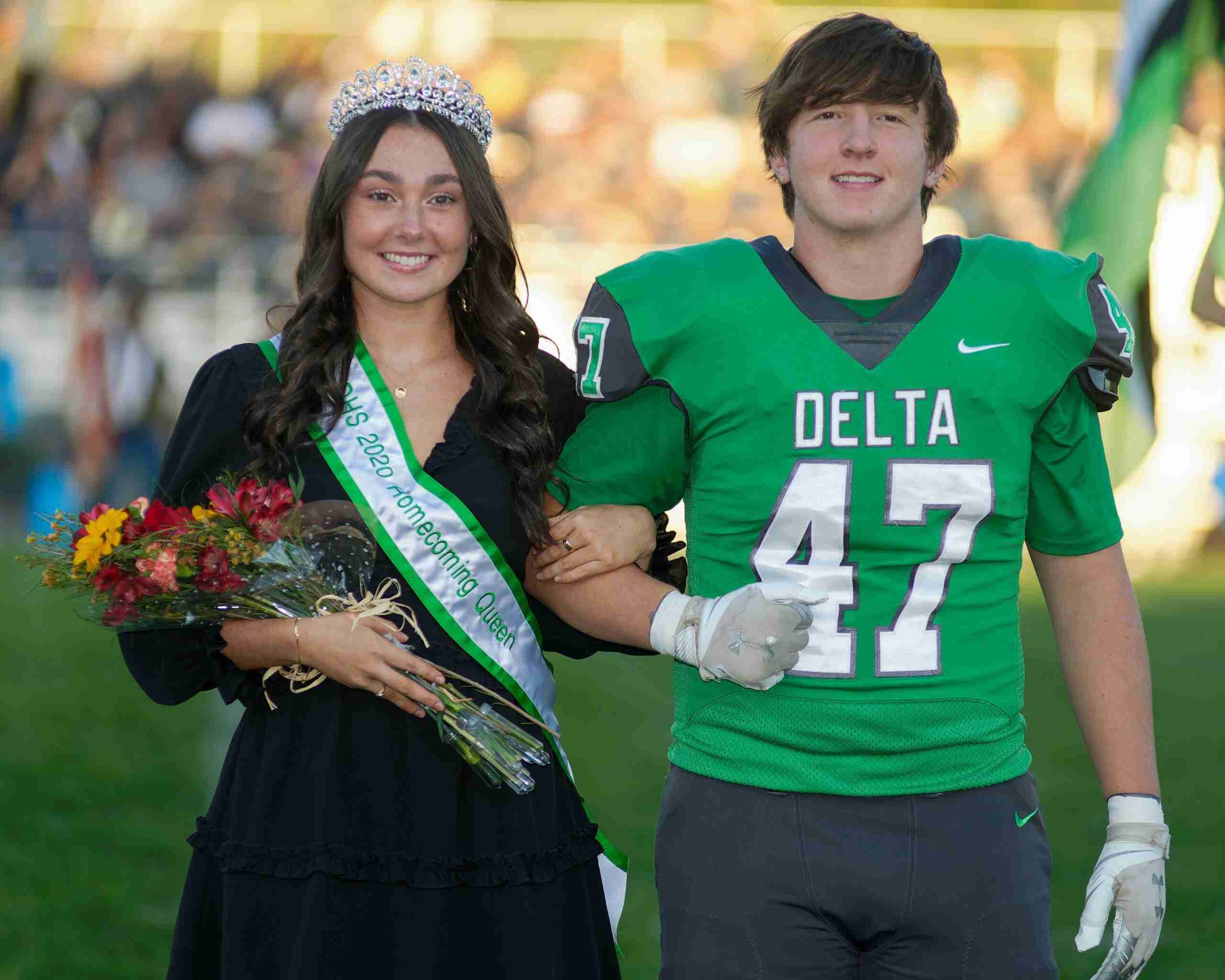