Pettisville Trio Turns All Four Judges on “The Voice” 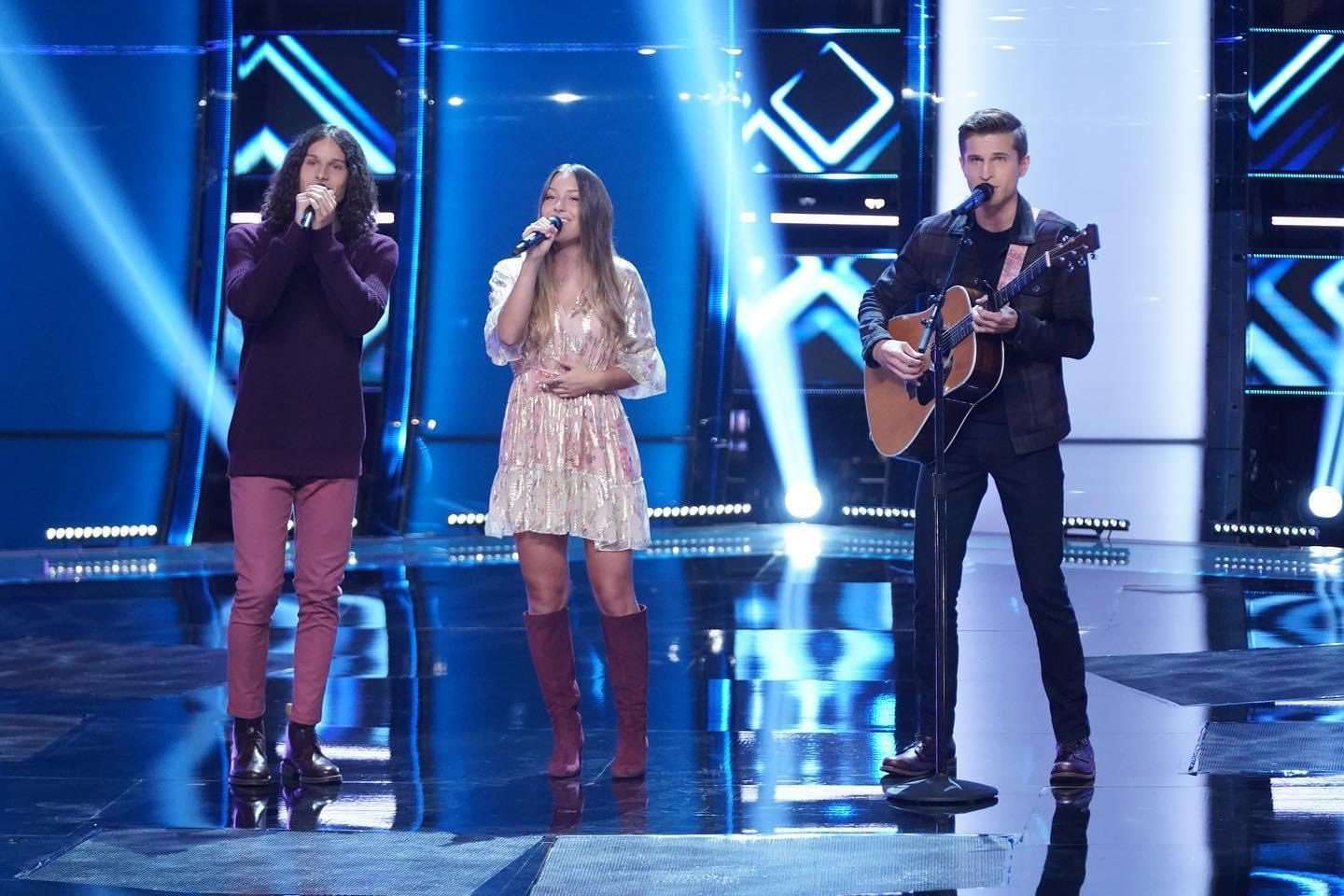 GIRL NAMED TOM … Seen here as they performed their blind audition for The Voice, are Pettisville, Ohio siblings, Josh, Bekah and Caleb Liechty.  They made a great impression on all four judges, causing the first 4-Chair Turnaround of Season 21. (PHOTO PROVIDED)

Living now “In a little house in South Bend” the three young people who wowed the judges on “The Voice” on Monday night, September 20, 2021, hale from Pettisville, Ohio and proudly said so when they were asked by Kelly Clarkson where they are from.

“Girl Named Tom”, made up of three siblings – Bekah, Caleb and Josh Liechty, were told by Kelly, whom they ended up choosing as their coach for the show, that she had a feeling that it might be a sibling blend of voices.

Their rendition of Crosby, Stills and Nash’s, “Hopelessly Hoping” was thrilling, proven by the looks on the judges’ faces, their exclamations, and the still silence at the end of the song before the crowd burst out in screams and applause.

Local friends, family and new fans are posting on their Facebook Page and following all the videos and updates online as this delightful trio hits the news. “What an amazing performance!” posted Deana Chupp Beck, wife of their Pettisville Schools music teacher, Mr. Duane Beck.

“Now the rest of the country gets to discover what we already know…how talented you are…as well as gracious, and kind and genuine.”  Mr. Beck also posted, saying to his former students and friends, “You were absolutely wonderful!”

“Such a polished performance and such tight harmonies!  You conducted yourselves on this national stage with professionalism and poise and grace and gentleness.  No one could have asked for more! We love you!”

In a phone interview, their proud teacher said that he is so excited for them. “They are the kindest, most gracious students I have ever had. It is exciting for me to see people like that get recognition like this.”

“I don’t think I ever heard them say anything bad about anyone else when they were in high school. Everybody loves them.” Mr. Beck added that it is no wonder they are such great young people as they were raised so well by their parents, Chris and Holly Liechty.

All three were homeschooled for their first years, with Caleb moving his school education to Pettisville Local Schools in the seventh grade, Josh in the fifth grade the same year, and Bekah joining them later when she was in the fourth grade.

Beck said that he was blessed to coach them as the director of the school choir and the area Junior Choral Society, a local children’s chorus as well as during school musicals.

Caleb, Josh and Bekah have a solid foundation from home and school, with training for their spirits as well as their minds, which shows up in the songs on their albums.

Their song “23”, which is a lovely version of the 23rd Psalm in the Bible, can be seen on YouTube and gives the listener the realization that they are deeply grounded in their christian walks as well as in their musical giftings. On their Facebook page, Girl Named Tom, they posted “where it all began…The ones who surrounded us with music from day one (with a picture of their parents wearing Season 21 jackets).

“We grew up listening to Mom sing in the church choir & watching Dad play drums.  We sang as a family quite a lot & at age 9 we were put into piano lessons.  Mom loved hearing us play the piano as she did the dishes, and BOY, did she have us practice.”

“Dad would often come into our room at night (we shared a room for a time) and play his guitar and sing us to sleep. He’s got great writing skills & we attribute a lot of our inspiration to him. We are SO grateful for our loving, supportive parents!  It was so crazy seeing them cheer for us on the big screen!”

The group formed up as a band in the summer of 2019 and began their touring. For those who have not already watched the clips or seen the show, Bekah explained that the band name, “Girl Named Tom”, is based on the fact that her brothers called her Thomas when she was little and it became a nickname.

The Voice Judge, John Legend, asked if the boys had been wishing for a brother and Josh, the brother with the longer hair, laughed and said, “There is speculation about that.”

As their sweet, clear voices rang out during their blind audition, all four judges – Blake Shelton, John Legend, Kelly Clarkson and Ariana Grand, hit their buttons to turn and see who it was that sounded so terrific.

All four said many kind things as well and tried to convince the trio to choose them as their coach. Many listeners thought it might be John Legend as he seemed to fit who they are, but Bekah said, “Well, shucks, this is really tough, but, uh, we are going with Kelly!”

Mr. Beck said in his phone interview, “I think Kelly will be a good mentor for for Bekah.  The boys say she is the center of the group, as seen when Josh pointed at her and said, ‘She is the Girl Named Tom’.”

Tickets are going fast already for their upcoming shows. Even before they were on the show, but many were aware that it was coming, 800 fans showed up at Central Mennonite Church for an outdoor concert in Archbold, Ohio.

A concert is scheduled at Sauder Concert Hall at Goshen College in Goshen, Indiana on October 1st, at 8:30 p.m., with Covid precautions that Face masks must be worn AND audience members must show either proof of vaccination or a negative Covid test (taken within the past 48 hours of the concert) for entrance into the venue.

In a television interview on WNDU 16 News in South Bend, Indiana, it was stated that they are stealing the spotlight on The Voice.

Bekah said that everyone just hopes at least one judge turns around so they were amazed by the fact that all four turned around.

Caleb shared that one of the reasons they chose to be on Team Kelly was because of “how friendly and warm and funny she is. She makes us feel at home.”

As everyone is diving to claim them as their own, and friends and watchers of “The Voice” from Fulton County, Ohio were wondering if they would say they are from Wauseon, or Archbold, or South Bend or Pettisville, the residents of Pettisville, Ohio are so happy that they claimed their hometown on The Voice, Season 21.

Their Pettisville teacher, Mr. Beck explained that only “in town” Pettisville residents have that address, so as the Liechty family is rural, they have an Archbold address.

As the nearby, larger town of Wauseon is actually registered as a small city, it was thought by some they might say Wauseon, and as Toledo is the large, well-known city, only 45 miles away, they could have said that.

But…they did not say South Bend, where they live, or any of the other options. They said Pettisville, Ohio.

As the season progresses, you better believe that Fulton County fans, as well as all of Northwest Ohio and Northeast Indiana, will be watching NBC’s “The Voice” on Monday nights, holding their breath, praying for the trio, and hoping for the best for “Girl Named Tom”!

Rebecca can be reached at Rebecca@thevillagereporter.com