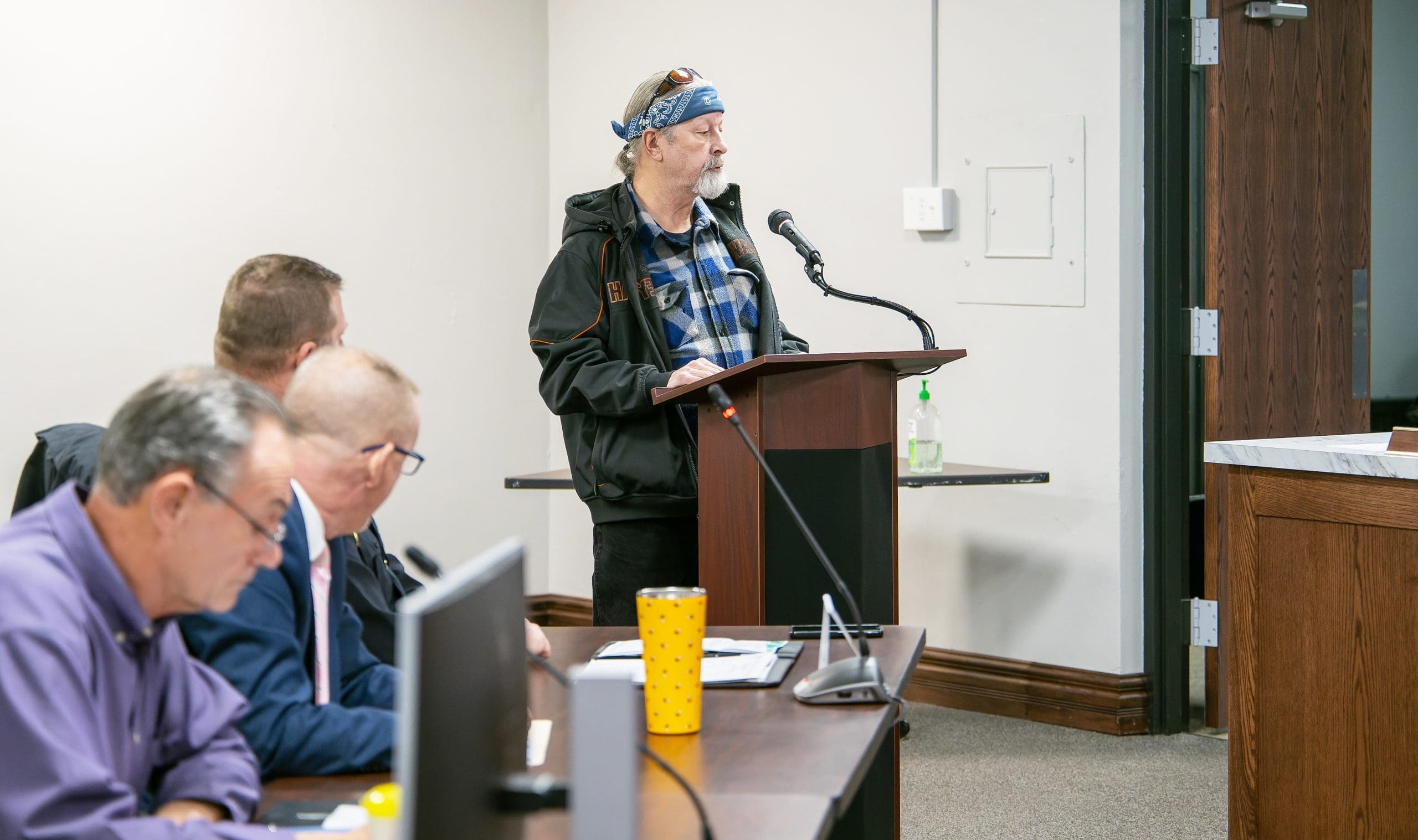 WATER … Delta resident John Henricks speaks to council regarding an increase he saw in a previous water bill. (PHOTO BY JACOB KESSLER, STAFF)

The Delta Village Council held their meeting on Monday, January 9th. The meeting began at 5:30 p.m. with the Pledge of Allegiance.

Council first moved to excuse council member Dawson who was absent before moving on to nominate, and approve, Arthur Thomas as council president.

Council next moved to approve the meeting schedules for this year along with the minutes from a special meeting held on November 16th, 2022.

The meeting then entered into the public wishing to address council portion. John Henricks came to council due to a huge spike in his water bill.

He stated that his water bill had tripled after showing constant usage for around three days.

Administrator Peebles stated that this issue is common and is usually the fault of a toilet that did not flush properly and is still passing water through it.

Peebles also stated that this issue is fairly common and that it happens all the time. Mr. Henricks stated that he has not had any plumbing issues, especially one that would have used 2,600 gallons over the course of a few days.

Council did hold discussions with Mr. Henricks; however, the bill was already paid for in full and no credit was able to be issued.

Mayor Wilton then made recommendations to council regarding the appointment of individuals to the park board.

Council moved to approve the recommendations made by the mayor before moving on to correspondence.

A letter was sent to the Fulton County Prosecuting Attorney’s Office regarding County Road 10 for York Township.

Administrator Peebles recommended an offer be sent to York Township. This offer would state the village would agree to plow the snow and take care of ice control at the village’s expense, but that the township would be responsible for liability and maintenance of that part of the road.

Mr. Peebles also stated that he does not believe York Township will sign the offer and that there is a consensus that the matter will not be solved unless it makes its way to court.

If the offer is not signed, the snow will not be plowed. It will be plowed up to the line and trucks would turn around.

Discussion then followed about legal and litigation capabilities for the road due to safety concerns.

Council then moved approve the sending of the letter to York Township.

The village administrator report then followed. Blue Scope Recycling has approached the village regarding a new potential expansion that will bring in more shredding capacity and better parking.

The company has acquired approximately 1.56 acres directly north of the current property. The company is preparing for an expedited annexation for the land that was purchased.

Council then moved to approve invoices as requested by the financial director.

The police chief then spoke and stated he had been told about a Norfolk and Southern Grant. Paperwork was filled out for the grant to replace the speed sign. The department was contacted and asked to put more into the grant request.

Stop sticks were added to the grant request which was granted. The police department was awarded $5,000.00 as part of this grant.

Legislative actions were then discussed with the following items being approved. Ordinance 22-21 amending section 951.06 of the Codified Ordinances of the Village of Delta addressing the burial of indigent persons who are residents.

Resolution 22-22 authorizing the village administrator to dispose of vehicles assigned to the village and the village has determined it has no used for.

Ordinance 23-01 to implement sections 3735.65 through 3735.70 of the Ohio Revised Code, establishing and describing the boundaries of the community reinvestment area within the Village of Delta, designating a housing officer to administer the program, and creating a community reinvestment housing council and tax incentive review council.

Resolution 23-01, with emergency provisions to be passed on the second reading, indicating the Village of Delta will provide utilities and other services for the property seeking to be annexed to the village with the filing of petition with the Fulton County Commissioners and declaring an emergency.

With no other items to be discussed, council moved to adjourn the meeting for the evening.