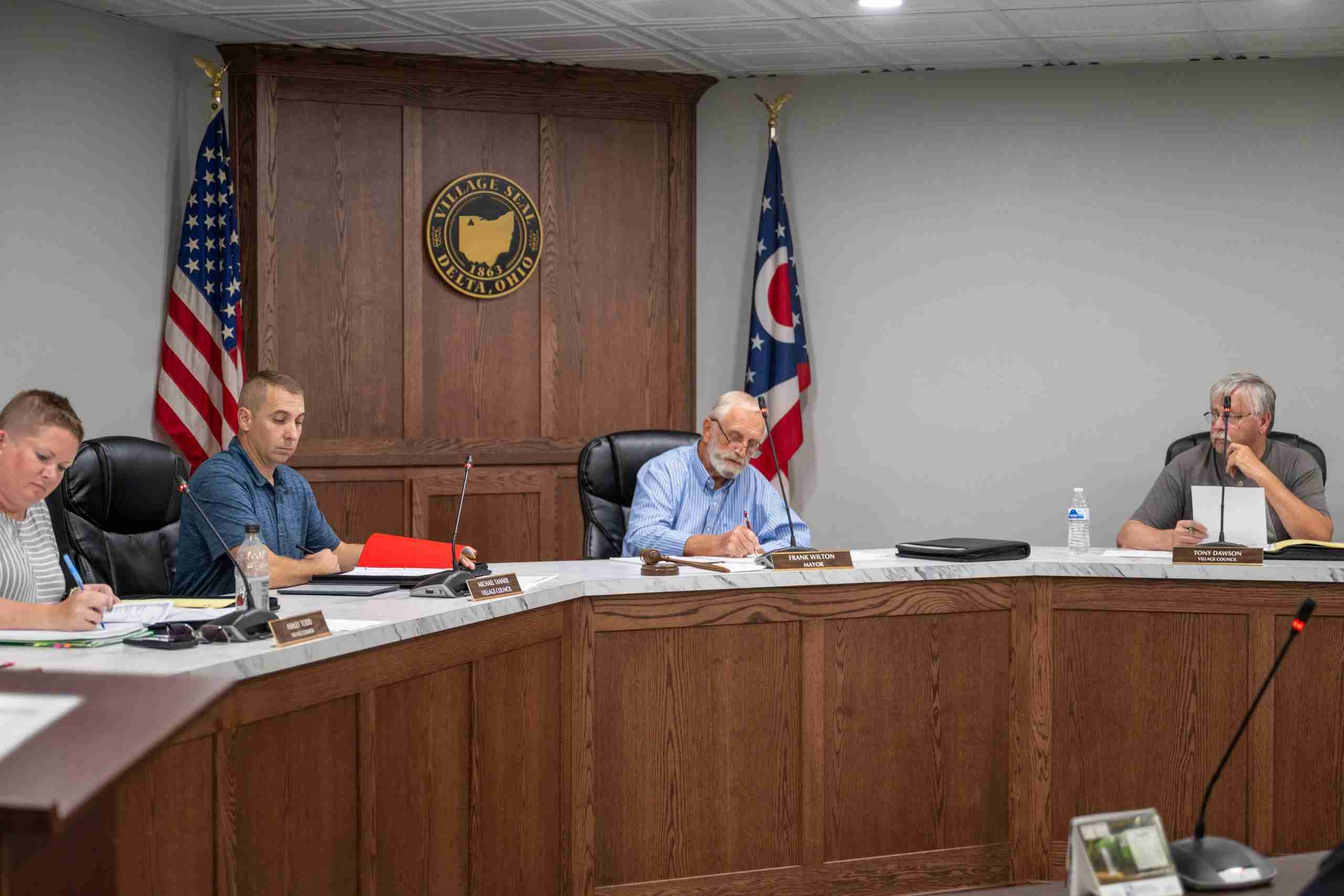 COUNCIL … The Delta Council listens as Village Administrator Brad Peebles explains the results of park surveys that were sent out to village residents. (PHOTO BY JACOB KESSLER, STAFF)

The Delta Village Council held their meeting on Monday, August 15th. The meeting began at 5:30 p.m. with the Pledge of Allegiance and a prayer.

Council first moved to approve the minutes for the previous meeting held on August 1st before moving on to hear a report from the village administrator.

Administrator Brad Peebles gave information regarding the park surveys sent out to the public. 110 were received of the close to 1,200 that were mailed out.

He also explained that there was a “lack of understanding” on the part of the United States Postal Service and the Delta Post Office as to where the village limits are and that there are areas of the village that did not receive the surveys.

Peebles explained to council that they will have to make some decisions as to how they would like to go forward with planning.

Surveys received show that most people are ok with the park facilities the way they are. Some ideas given by people are for field lighting and better dugouts.

Peebles also stated that by what the survey shows, if there is to be an update to the pool it will need to be to the existing pool. One other thing that was prevalent in the surveys was the request for walking paths in the park.

Peebles stated that paths have been looked at. The issue of more public input or having public meetings was also discussed.

Invoices for the finance director were approved next before the police chief spoke. The chief explained that the department is currently in the process of getting a new patrol car.

It should hopefully be ordered next month and be obtained in January. Council member Dawson then asked about fire hydrants stating that he had heard there were around six that were broken.

Peebles stated that there should be five and that they are looking at getting them fixed and that a company will be coming into town to handle the issue.

The passing of Ordinance 22-13 to authorize the village administrator to execute required documents to sell rights of a perpetual easement specifically for the operation of a communications tower on village owned land was worked on next.

Peebles explained that Crown Castle has been in a lease agreement with the village and that this agreement is for a cell tower which is located on the village land.

The discussion of purchasing an easement took place with the company and an offer was given. The amount of the offer is for $322,500.

If these funds are applied to an upcoming project, it should reduce future interest payments by an amount of at least $420,000.

The ordinance was approved by council before moving to enter into executive session at 5:42 p.m. to discuss personnel.

Following executive session, the meeting was adjourned for the evening.