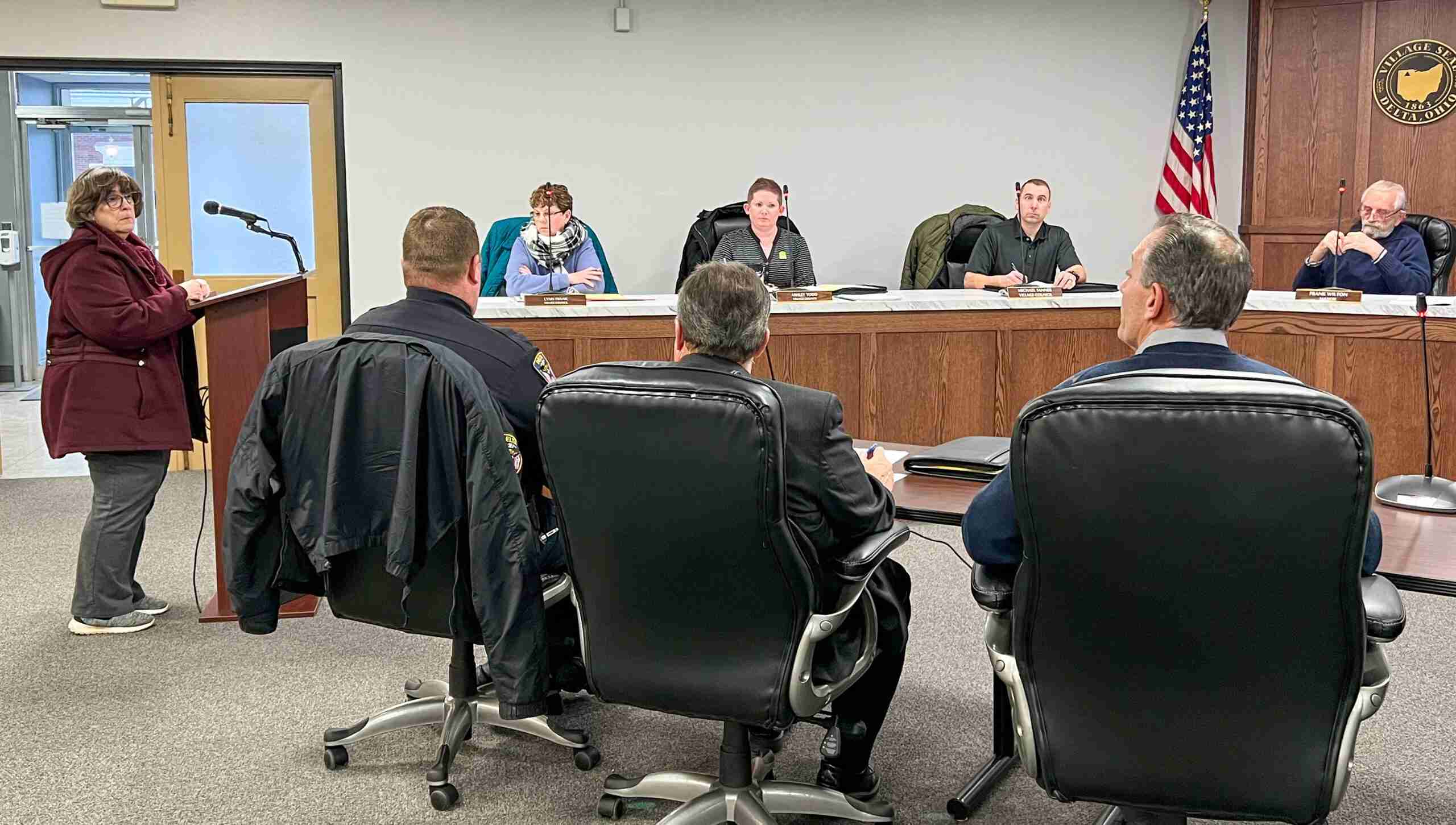 PUBLIC PARTICIPATION … Beth McSurley addresses the Delta Village Council regarding matters such as the flooding on her property, stones on Pelton Drive, and the possible new village pool. (PHOTO BY JACOB KESSLER, STAFF)

The Delta Village council held their meeting on Monday, February 7th. The meeting was called to order at 5:30 p.m. followed by the Pledge of Allegiance and a prayer.

Council first moved to approve minutes from the previous meeting that took place on January 24th before then moving to hold a public hearing for an Ag District Renewal application.

The Ag District renewal application is for Jerry Tedrow and his property. Village Administrator Peebles explained to council and everyone in attendance that these designations only last for five years.

At the end of that period, a new application must be submitted, and a public hearing has to be held. With no one present to speak for or against the application, council moved to close the public hearing.

The floor was then opened to any member of the public who wished to address council. Beth McSurley spoke first and asked for an update regarding her property and the flooding she has experienced.

Mr. Peebles stated that as of right now there has been nothing figured out with the property.

McSurley then asked what was going to be done with her back yard since there was part of it dug up to try and locate the issue. Mr. Peebles stated that it will be restored by the village in the spring.

The question was then asked regarding the stones on Pelton Drive and if there were any plans to repave the road. Mr. Peebles stated that as of right now there is no plan to repave Pelton Drive.

McSurley then made a suggestion regarding the design of the new pool. She stated that it would be beneficial for it to include a section for older residents to be able to enter and exit easier, rather than by a ladder.

Mr. Peebles explained that the pool design right now, includes a zero-grade entry where swimmers are able to enter and walk down into the pool.

Carol Donaldson then spoke regarding the issues she has been experiencing in her basement. The basement was previously flooding but is now experiencing a sewer smell.

Mr. Peebles stated that it sounds as though a P trap may have dried out and that someone from the sanitary department will be coming out to take a look.

Next, council discussed the review of committee personnel. It was decided by council to keep the committees staffed by the same people.

The Village Administrator then gave his report with the first item discussed being the vote for the Ad District application. A motion was made by council to approve the application which passed.

Mr. Peebles then explained to council that the village has been experiencing significant cost issues with water and wastewater. Prices for chemicals, items and repairs have been increasing significantly.

This may cause the village to reevaluate the pricing structure for water and wastewater services. The purpose of discussing this now is to let them know so that, in the future, there is no surprises.

The Finance Director then informed council that the invoices need to be approved and that the bank reconciliation from January had been submitted to the finance chair.

Council then moved to approve the invoices as presented, as well as the finance committee meeting minutes from January 24th. The following Ordinance and Resolutions were then approved by council.

The Third Reading for Resolution 22-01 authorizing the Village Administrator to advertise for bids and enter into contract for the construction of the Fulton County Water Connection.

The Third Reading for Resolution 22-02 authorizing the Village Administrator to bid and enter into contract for the construction of roadway with utilities to support the expansion of Nature Fresh Farms Distribution Complex.

The First Reading with Emergency Provisions for Resolution 22-03 authorizing the Village Administrator to execute a renewal application with the Public Utilities Commission of Ohio for the governmental electric aggregation program and declaring an emergency.

The First Reading of Ordinance 22-01 approving amendments to the Village of Delta personnel policy and procedure manual.

Discussion then took place regarding Comp Pay that the village offers to employees. Comp Pay involved employees being able to work overtime, and store those hours worked, to then be used as a payout later or as a sick day.

Previously, employees were able to save up to 240 hours, but an issue was brought up to change that number to 160.

It was stated that one reason for the change is that employees could in theory keep the hours until they decided they would like to use them, which may take place after receiving a raise.

This would lead to work being done on one day but being paid more later.

Discussions took place between the Village Administrator, Finance Director, members of council and the Police Chief regarding questions about the change, and concerns.

After discussions ended, a vote was held to change the amount of hours to 160 which passed.

Council then moved to enter into executive session at 6:16 p.m. Upon their return, council moved to adjourn for the evening.