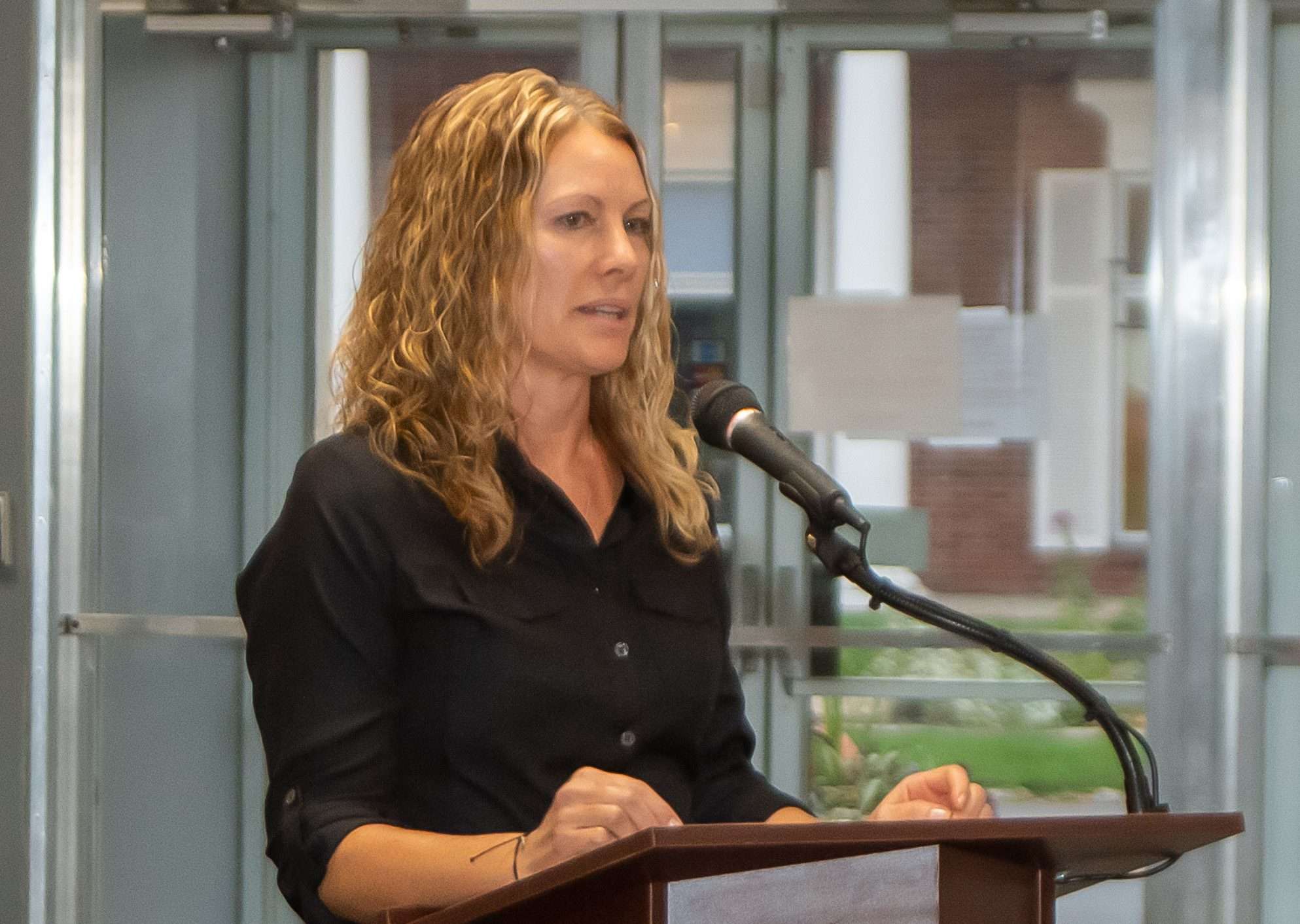 The Delta Village Council once again was packed this week with residents both from Delta and the surrounding area. More people filled the room then there were chairs available in an attempt to see what councils’ decision ultimately would be.

The meeting began at 5:30 p.m. with Mayor Wilton calling the meeting to order and leading everyone in the Pledge of Allegiance. A prayer was then given followed by roll call with council member Ashley Todd being absent.

Council first moved to approve the minutes from the previous meeting that took place on October 18th.

Mayor Wilton then spoke to everyone in attendance and let them know that typically the meeting would move into public concerns but that he foresees a vast majority of the people present wishing to address council.

“In an effort to conduct this meeting in an orderly fashion, I would ask that you wait until the legislation you are interested in is presented. Opportunity will be given for individuals to address council prior to a vote,” stated Mayor Wilton.

He went on to state that the two-minute time limit will be enforced and that the law director will act as timekeeper. It was then asked if anyone present wished to speak in regard to anything else other than the marijuana issue.

With no one wishing to speak, council moved on to correspondence. Financial reports were received for the 2021 Chicken Festival that showed a profit of $9,775.

Village Administrator Peebles explained that he believes the number will increase by about $6,000 due to an agreement with the Delta Eagles regarding a payment for fireworks. It was also stated that council has received numerous letters from the public regarding the marijuana issue.

Council member Tanner then stated that he reviewed the proposal for the ballot initiative and did not see anything prohibiting a tax abatement.

Mr. Peebles stated that there is a proposal for council to consider in regard to placing the marijuana issue before the village of Delta.

“To do that I think you have to have some parameters for if a facility were to come here what would be allowed. You will see in the proposal we have attempted to address numerous issues beginning with site and where they would be allowed.”

“Which as we have indicated previously, they would be proposed to be placed in the Delta Industrial Park, and ultimately with that would have to present us with site plans that would identify parking, drive throughs, and facility concepts,” said Mr. Peebles.

He continued with, “You will see that we are actually proposing that the dispensaries would have the appearance of a professional office building.”

“If there would be a grow house to be allowed, it would actually have to be constructed in an industrial nature so that if one were to go out of business at some point the future, we would have a product to market for an industrial use in the industrial park.”

“One of the things council has the ability of doing under Ohio Law is to place impact payments on the grow facilities, the proposal to be considered is for $1 Million per year, per grow house. In the proposal, dispensaries are limited to a maximum of 2 grow houses and processing facilities are also limited to a number of 2.”

“The $1 million that is proposed, is also proposed to be split. $500,000 would go to the Village of Delta General Fund, and $500,000 going to Pike-Delta-York Schools with a stipulation that $100,000 goes to be placed into educational support for drug prevention.”

Mr. Peebles then explained to council that if they would like to proceed with this, a vote would be needed to draw up language that would then also be voted on before it is presented to the Fulton County Board of Elections.

He also let them know that it would have to be presented to the Board of Elections by February third in order to be placed on the May 2022 ballot and that the moratorium language needs to be updated to a date specific moratorium for May 31st.

Council then moved to approve invoices as requested by the Finance Director. The Law Director then stated that he had nothing to present and was proceeded by the Police Chief.

Chief Hartsock stated that they took in an additional 8 pounds of drugs during drug take back. With nothing further, the meeting moved on to hear any issues from committees.

Council member Lynn Frank stated that they had all received something from Chief Hartsock regarding an increase for the police department.

Council member Anthony Dawson then spoke about Madison Street and asked if there would be any work done on it before winter.

Mr. Peebles then stated that it will be patched only, due to it already being scheduled for resurfacing next year. Council then moved on to old business.

The Second Reading for Ordinance 21-13 regarding appropriations for the Village of Delta, Ohio for the year 2022 was heard. A motion was made to approve the ordinance which passed.

Council then moved to table Ordinance 21-14 for the time being and moved on to the Second Reading of Ordinance 21-16 regarding approval for the administration to enter into agreement with Pike-Delta-York Local School District. A motion was made to approve the ordinance which passed.

Council then moved on to new business with the First Reading of Ordinance 21-17 being discussed first. The ordinance was in regard to the establishment of salaries and wages for employees of the Village of Delta and it was approved.

Council then heard Ordinance 21-18, a First Reading with an Emergency Provision. The Ordinance is in regard to prohibiting the cultivation, processing and or wholesaling, retailing and dispensing of medical marijuana in the village of Delta, Fulton County, Ohio and declaring an emergency. A motion was made to suspend the rules.

With a four to one vote, the emergency portion of the ordinance failed. Council then moved to amend the Ordinance to state that the moratorium will take place until May 31st, 2022, instead of the one year.

Council then moved to approve the Law Director and Village Administrator to prepare legislation to vote on regarding the placing of the marijuana issue on the ballot in May of next year. The floor was then opened for anyone to come up and address council.

The question was raised by residents as to why the ballot initiative would be including the sale, growing and cultivation of marijuana into one choice.

It was suggested that people should be given the choice and have each of them as a separate issue. It was also asked how big the grow facilities would be with Mr. Peebles stating that the maximum size allowed under the proposal will be 25,000 square feet.

Lynette Nation then spoke next regarding other states that already have marijuana allowed and what lawsuits have happened as a result.

“I did some lawsuit reading to see what they are upset about after they have the growing facilities come in. I would like to ask Mr. Peebles to put this on his list, I heard you talk about the restrictions about outside appearance, but the number one priority should be air filtration.”

“There is a huge odor that comes from the grow facilities that can travel a one-mile radius and that is going to depend on which way the wind blows,” said Lynette.

She went on to say that she saw where schools had issues with students getting headaches and that they had to warn incoming sports teams that there were facilities in the area growing marijuana.

Doug Ford, who is the Delta High School Principal, then spoke. He asked when the points Lynette Nation made would be addressed specifically to this industry, but also all the noise pollution, light pollution and more.

“This is not the growth I thought about growing up in Delta”, said Mr. Ford. He continued with, “When you talk about the east industry park, I’m guessing out there in the old industry park out by the trailers, there’s a community out there full of families and that is what I wanted to speak up for the most tonight.”

Beth Thomas, the Director of HC3 then spoke. “There are currently 255 medical marijuana card holders in Fulton County, and HC3 recognizes that for these individuals, medicinal use of marijuana may help their conditions.”

“There are already two dispensaries located within 30 miles of Delta to meet their needs. The questions I have for council tonight are, have you talked to the other six Fulton County communities who have passed moratoriums or ordinances against the industry and what motivated them to do so?” said Beth Thomas.

Several more community members then spoke regarding the marijuana initiative with some speaking to the anger they feel in regard to the issue being brought up, and other asking questions. Some shared personal stories regarding addiction and their experiences with people that had gotten involved with drugs.

Questions were asked regarding the possibility of no tax abatements and how the money will be collected. Mr. Peebles stated that the ordinance will have wording in it that prevents a tax abatement from being given to the organization. The $1 million will be collected annually and if the fee is not paid the facility will no longer be in business.

Council then moved to make a motion to amend the ordinance to show the date of May 31st, 2022, for the moratorium.

The motion passed and council then moved to suspend the rules and approve the ordinance to place a moratorium for marijuana in the village until May 31st, 2022.

A motion was then made to move Ordinance 21-14 back off the table which passed followed by a motion to approve the ordinance which failed with a vote of 0-5.

Emergency Ordinance 21-19 was then heard and was in regard to the supplementation of ordinance 20-30 to make supplemental appropriations for the current expenses of the Village of Delta for fiscal year ending December 31st, 2021.

A motion was made to suspend the rules which passed followed by a motion to approve the ordinance which also passed. Mayor Wilton then asked if anyone had questions in regard to the night’s meeting.

With no one moving to ask any questions, the mayor stated the next meeting will be held on November 15th at 5:30 p.m. before asking to adjourn. A motion was made to adjourn which passed at 6:25 p.m.