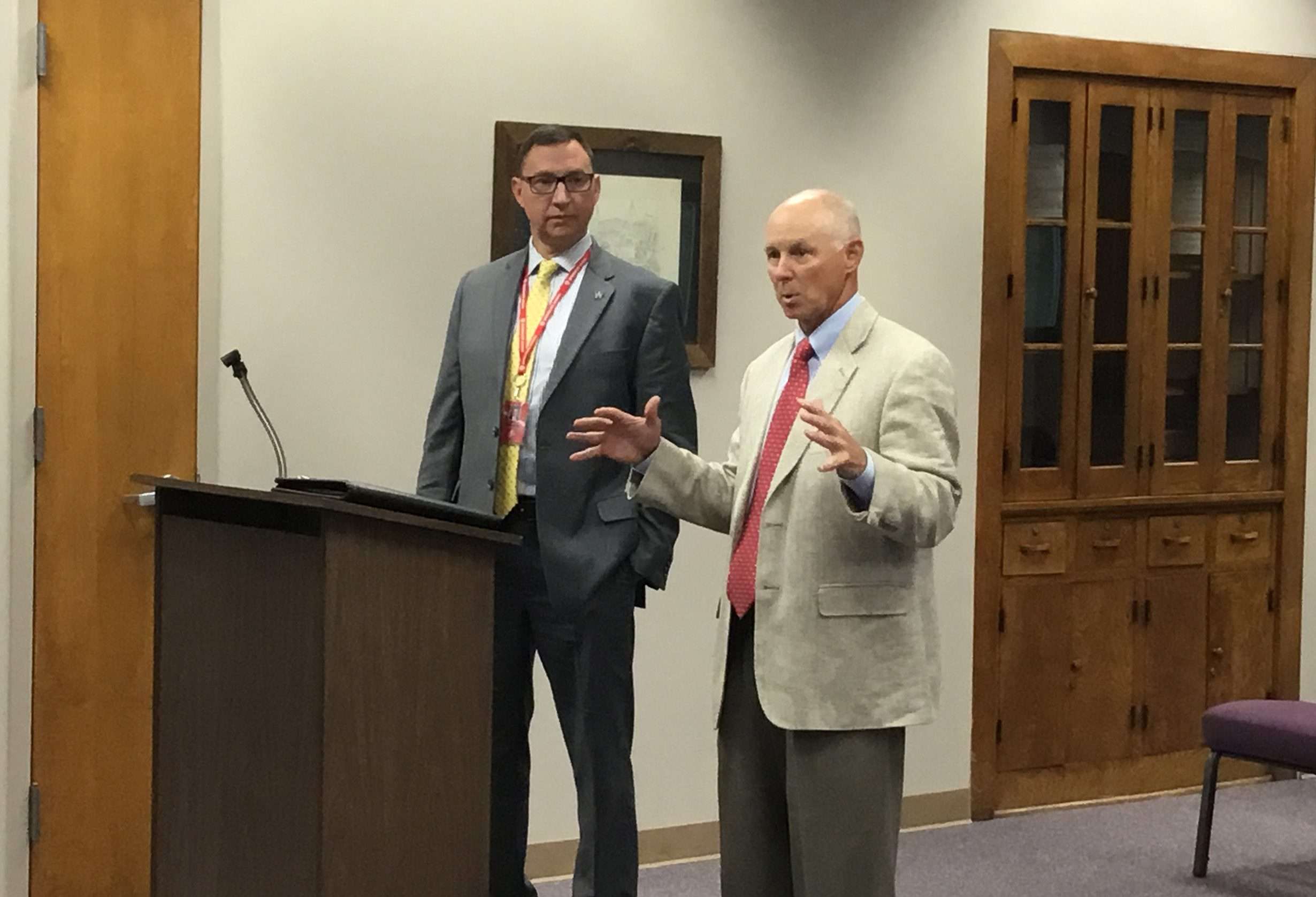 SCHOOL ADDRESSES COUNCIL … Wauseon School District Superintendent Troy Armstrong (on the left) and Treasurer Dave Fleming addressed Wauseon City Council about concerns the residents have about the Earned Income Levy that will be on the ballot in November 2021. (PHOTO BY REBECCA MILLER, STAFF)

Wauseon Schools Superintendent Troy Armstrong and Treasurer Dave Fleming presented a strong case for the citizens of Wauseon to vote for the proposed 2% Earned Income Levy, at the October 4, 2021 City Council meeting. This is a five year levy and will be on the ballot November 2, 2021.

Council wanted to know why there is a need for this levy and what the funds will go towards, so quite a discussion was held as they shared the information.1.75% will be used for current expenses for the school district and .25% will be for permanent improvements.

Some of the improvements discussed include reducing class sizes and updating the auditorium and softball complex, which does not fit regulation standards and has caused some injuries.

Armstrong said they have worked hard to get all the information out to the public and he was glad they had this opportunity to do it again.

Fleming shared the difference between earned and traditional income taxes, saying that anyone with no income they are physically earning at present will not be taxed. It only taxes people who live in the school district.

“There are 19 districts in the area who have an earned income tax,” he added. The district has suffered some major cuts in income over the past few years and there are many other things that are “driving the need for this levy,” he said. Armstrong added that the only option for the school is to look to the local area for assistance.

They also answered questions and concerns for council:

-Farmers will be taxed on their own land that they are working.

-It is a high percentage but the Wauseon School district is one of the lowest funded schools in Ohio.

-This will get them back to what they were before, but will not put them where they need to be.

-Boiler has to be replaced or there will not be heat in the Elementary school this winter and that costs a lot.

-Buses are old and need replacement.

-Many cuts have been made in the past few years, already. They listed some of them, including not refilling positions of people who have retired or resigned and not adding any new positions.

-The state and federal rulings keep adding more things they have to do, but without funding to do them.

-They were approved for four COVID-19 coordinators and they only hired one.

-The District has gone ten years without a pay increase.

-They understand it will be a sacrifice for many, and they are hoping that the district residents will see their way clear to vote for the levy, Issue 14.

-Armstrong said there are many who do not have a secretary.

When asked what could happen if the levy does not pass, Superintendent Armstrong said there are some things that will happen, not just “could” happen. He listed, “Approximately 25 employees across the board will be cut; reduce to minimum transportation (only students who live 2 miles outside of their school district building); and they will drop ALL extra-curricular (all athletics and clubs).”

There was also some sharing of what will be done over the five years, if it does pass, with Armstrong sharing some items that he feels are desperately needed, including:

1.) Facility Improvement – for the softball diamond (not regulation and could even be a problem with Title 9 as it looks like they are more concerned with male athletes than female athletes); improvement for the 42 year old auditorium – LED lighting, curtains are needed at $25,000 per set, seating needs to be replaced, the pool was just all fixed up ($110,000) but it is done once every 10-15 years and is supposed to be done every year.

2.) “Maintain Six Teachers at Every Grade Level” – especially in the younger grades (K-5) he feels this is so needed to keep only 22 students in each room; be able to keep up with the Increase in Individual Education Plans (IEP) with enough intervention specialists; Keep up with the mandates that have come up over the past eleven years that have gone from $0 to over $2 million annually in that time, with no funding for it; at the high school “we want to prepare every student for whatever it is they want to do – further education, military or a job”; bring back industrial arts, home economics and financial literacy. He shared passionately that all these things are so needed.

The levy will bring in $20,000,000 over the next five years and will provide for all these things, upkeep, buses, enough employees, etc. The council members also offered their own suggestions of things that could be done to cut the amount of money needed including moving to eight periods a day instead of seven.

Fleming added, “Concerning the question of over staffing, we have been identified, because of our financial situation…four districts in the state are having what is called a Performance Audit by the Auditor of State…So they are going to come in and do this audit over the next eight months.”

“We got identified for that because of our situation, because we are one of the four… I hate to say it,” he said, “but bottom of the barrel schools out of 610 in the state.”

For more information, Armstrong and Fleming urged everyone to go online to wauseonindians.org and click on the tabs regarding the Levy. There is a video to watch that is very informative and the “Did You Know?” section is also helpful in answering questions.

In regular business, council voted to approve the minutes for the September 13, 2021 regular meeting and the September 30, 2021 Committee of the Whole minutes. Also approved was a motion to

Amend the agenda to add Department Head Reports at the regular meetings.

Departmental reports were then given by:

-Director of Public Service Keith Torbet – He attended the Ohio Public Service Institute Training; he has a public hearing coming up for the Brunell St. project on Monday, October 18 at 4 p.m. in council chambers; he will be working on the storm sewer edition for Glenwood St. next; 13 dumpsters were used for the unlimited drop off.

-Resolution 2021-12 Resolution accepting the amounts and rates as determined by the Budget Commission and Authorizing the Necessary Tax Levies and certifying them to the County Auditor was moved to final reading and approved.