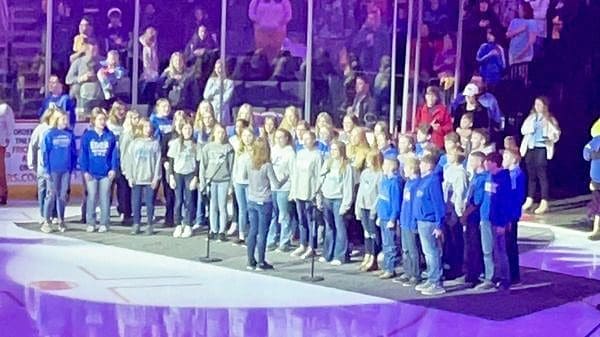 PERFORMANCE … The Edon Junior High Choir is pictured on the ice with hockey players, performing the National Anthem in front of thousands of people during the December 7 game against the Kalamazoo Wings. (PHOTO PROVIDED)

Forty-three Edon Junior High Choir Students sung on the ice in front of thousands of people who were attending the game against the Kalamazoo Wings.

The game was a part of the Walleye School Days, where games are scheduled during the school day to have students from the area to go as a field trip.

This allows thousands of students from local schools to go to Toledo for a game, ranging from kindergarten all the way through high school.

Tickets were purchased for each student through funds from fundraisers the music department has held.

Cameras that project the game on large tv’s above, were locked on the students performing, seeing themselves on the big screen was a big highlight during the experience.

Prior to the performance, students waited in the basement of the stadium and got to see a little bit of behind-the-scenes action.

Along with the forty-three students, fifteen family members of the students also were able to watch the performance and game as well as teacher Katie Rummel.

During interview with Edon music teacher, Cathy Frastaci, she shared, “It was an awesome experience to get to sing in front of thousands of people.”

“The crowd went crazy cheering as we finished singing the last note and all the students were just thrilled to get out on the ice and have the cameras and mics on them.”

Frastaci added, “We had a great time watching the game, even though the Walleye lost unfortunately.”

North Central Schools as well as Bryan Schools were also in attendance for the Walleye School Days Game.