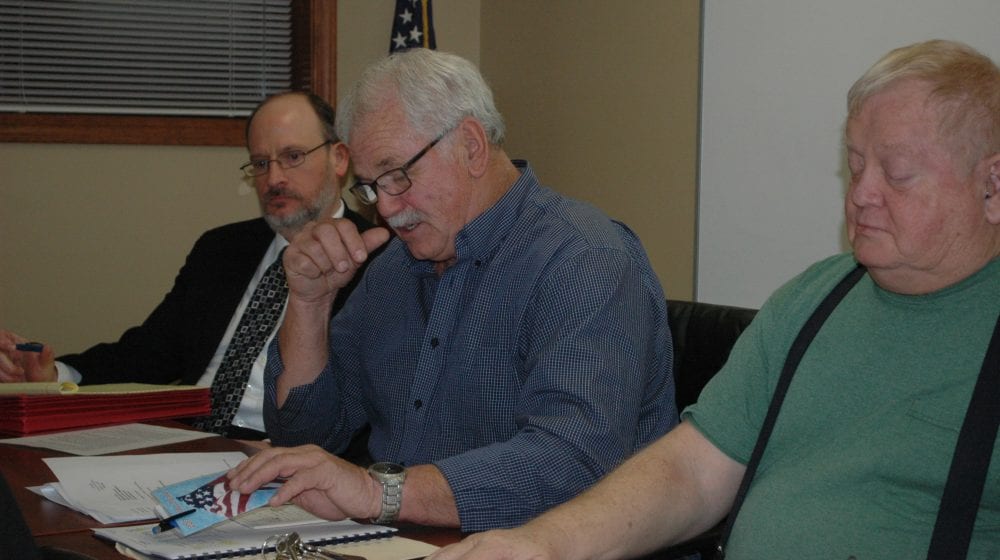 The year 2016 was kind of a different year for the village of Edon.

That was the opening line from Mayor Duane Thiel’s State of the Village address given at the Jan. 16 meeting. Although brief, Thiel’s comments touched on the positive and negative news of the past 12 months.

Among the low lights was the closing of the grocery store and the steakhouse. But the Mudflap Glass and artists’ group and Tri-State Diesel moved in.

“Tires and Wheels are putting an addition on,” Thiel said. “Which is an asset to the town.

“Dimension Veneer has done some renovation and an addition on.”

The village will benefit from the new water plant and the new Family Dollar store which begin construction this spring, Thiel said.

One of those issues is the fate of Tom Szymczak and whether he will be reinstated as police chief. He has been on administrative leave since he was involved in a shooting of a Williams County resident who was the subject of a standoff with the sheriff.

Several residents who would like to see Szymczak reinstated came to the council meeting to voice their support.

The state has cleared him of any wrongdoing in the shooting, but Mayor Thiel has not restored him to his position.

The call from the public to reinstate the chief was led by Cheri Jacobs who claimed to have 50 signatures on a petition asking for his return.

The signatures should show the mayor how greatly missed the chief is among the people.

“The kids get a lot out of Tom at school,” Jacobs said. “Tom wants to come back; it’s where his heart lies.”

Szymczak should be back after he was exonerated, and she was surprised he had not been brought back, Jacobs said. Most of the signatures are of people who work at the school.

“He should be back at work,” Jacobs said.

Another resident urged Szymczak’s return as well. He said he was there the day of the shooting and called the events “unfortunate.”

“I sat and watched and it was unfortunate,” Jeff Mills said. “I wouldn’t want to be Tom. I don’t think anybody wants to kill someone.

“I wouldn’t want to make the decision, right or wrong.”

Like anyone else, Szymczak deserves a second chance, Mills said. Being a police officer in that situation is not easy, especially the way police have been criticized recently, he said.

The mayor faces a rock-and-a-hard-place decision, Mills said. There are no good or easy decisions here, he said.

“There’s no right answers from where you are sitting,” Mills said.

Thiel agreed and called the situation “a lose-lose.”

If Szymczak comes back and something happens, there will be plenty of critics who will say the mayor knew it was a possibility.

“It’s going to be a nightmare for the town,” Mills said.

Another resident was succinct.

Mills also spoke about meeting with Mid-Toll in a few weeks about an idea he has. He said he has been calling on behalf of Metaldyne to bring new work to town. He suggested the village form a committee to promote the vacant buildings in town to prospective companies.

“We’ve got good water and we are six miles from the turnpike,” Mills said.

The chief’s future was just one of several issues facing the mayor and Village Council. The village also needs to find a new administrator and approve a wage ordinance.

The hour-long meeting also saw Lee Lawrence narrowly elected as council president. (Gale Horn and Richard Chapin dissented). The council will continue to meet on the third Monday of the month at 7 p.m., except for February, when the meeting will be on the 21st.

The village has not had a great response to its ad for a village administrator and sewer operator. One person has inquired about part-time work as a licensed water system operator.

The village’s challenge is trying to find somebody to come work for the village at the wages it can pay. There are probably only 270 people in the state who are licensed water/sewer operators, Thiel said.

It takes a year to qualify for a water license and two years for a sewer license. Licenses don’t cross state lines.