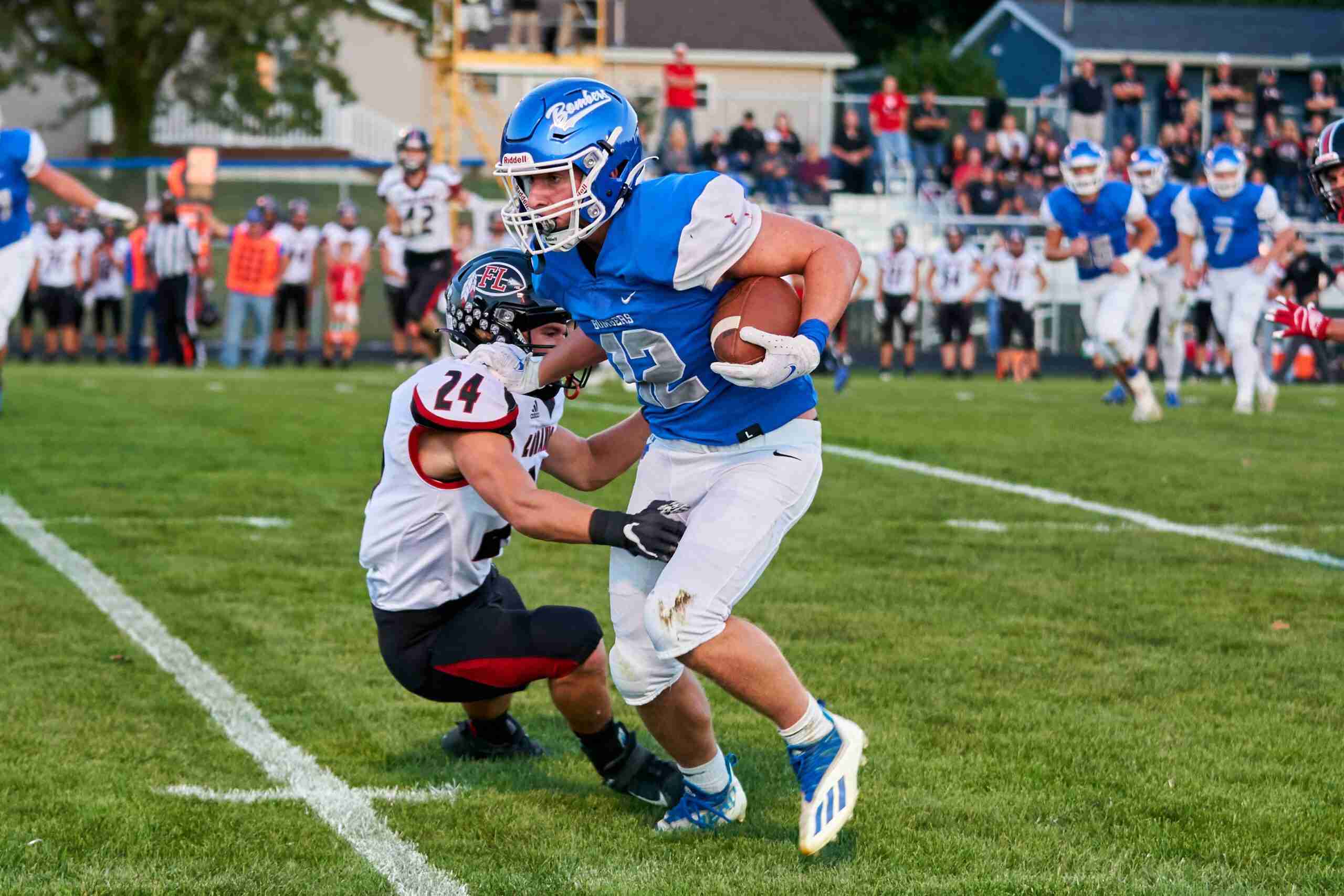 LEADING RECEIVER … Edon’s Gannon Ripke fights off a tackle after a first half reception. (PHOTO BY RICH HARDING, STAFF)

It appeared that Edon quarterback Drew Gallehue’s 353 yard passing performance was all for nought. With one minute to go, the Bombers’ three-point lead was in jeopardy, with Fort Loramie collecting a first and goal situation at the Edon five-yard line.

But the Redskins were only able to gain one yard on two running plays and two straight passes were incomplete, enabling Edon (5-1) to prevail in front of a homecoming crowd, 24-21.

Edon had trailed at one point, 21-8, but rallied back with two fourth quarter touchdowns. On the first, Gallehue hit Gannon Ripke with a 60-yard touchdown pass.

“Coach called for a long pass and Drew threw it right on the money,” Ripke said. “I just had to catch it and the play seemed to light a fire under us.”

Gallehue then ran in the two-point conversion to cut the Redskins’ lead to 21-16, with 9:02 left in the game.

After forcing a Fort Loramie punt, Edon took over on its own 27-yard line, with 6:49 left in the contest.

Next, on third and two from the Ft. Loramie 10-yard line, Gallehue completed two straight five-yard passes to Caden Nester, with the second strike going for the touchdown. Gallehue’s two-point conversion pass to Steinke put Edon up, 24-21, with 4:17 left.

“We had great coverage on both of those incomplete passes and we were able to hold on,” Ripke said. Early on, Ft. Loramie had taken a 7-0 lead, on quarterback Caleb Maurer’s 25-yard TD pass to Logan Eilerman.

But Edon came roaring back and took an 8-7 lead on Gallehue’s one yard TD plunge and his two-point conversion pass to Ripke.

Ft. Loramie then put together a late second quarter drive and scored with just 16 seconds left in the first half on Maurer’s eight-yard TD pass to Eilerman. That put the Redskins up at the half, 14-8.

The Ft. Loramie lead grew to 21-8, early in the third quarter, when Maurer hit Eilerman with his third touchdown pass, this time from 21 yards out.

For Ft. Loramie (2-4), Maurer completed 19 of 31 passes for 258 yards, while Eilerman finished with eight receptions for 87 yards. Jacob Sherman led the Redskins ground attack with 50 yards on 11 carries.

UP NEXT: Edon will return to TAAC play with a trip to Hilltop (0-6).