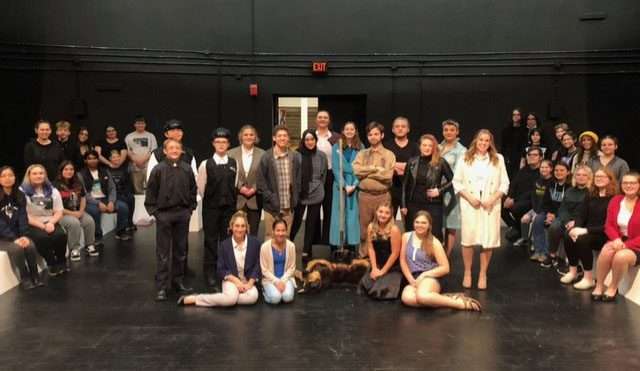 The November 12-14, 2021 production of “The Curious Incident of the Dog in the Night-Time” by the Bryan High School Drama Department was absolutely incredible.

A normal High School production includes the choice of a “fluffy” play or musical that will draw the audience into an evening of fun and laughter. This was so far from that.

The plot covers much more than an incident about a dog, although the audience saw a “murdered dog” in the center of the Theater in the Round as they entered to take their seats, and the death of the dog played a large part in the life of the lead character.

The play was written by Simon Stephens, based on the book by Mark Hadden. All of the students involved in the play were required to read the book and it paid off as the understanding of the situation could be seen throughout the production.

As Director Betsy Zuver wrote in the program, it was definitely a “unique theatrical experience,” much greater than just attending another high school play.

Although proud family members and friends were there to see their beloved students perform, they were given a different kind of an evening than usual.

The lead character, Christopher, with Ethan Psurney bringing him to life on stage, was portrayed as a teenager on the Autism Spectrum.  Ethan is a Senior at Bryan High and gave 100% to his character during each production.  At the end of the 2 ½ hours, Psurny was exhausted, and rightly so, as he threw himself into every moment of the show.

Anyone who knows someone with autism may have seen moments when they just fall apart and are completely unconsolable. Ethan Psurny portrayed this part of his character in such a convincing way, sobbing in a ball on the floor, pounding on the side of his bed and shaking all over as he tried to deal with life as it came at him.

A special note in the program stated, “While neither the book nor the play mention the word Autism, the implication is that Christopher exists somewhere on the spectrum.”

“As a cast and crew, we made every effort to learn what we could and treat the subject with authenticity and respect. We dedicate this performance to those who love them.”  The cast and crew, along with their directors were successful in their goal!

Ethan was surrounded by other student actors who gave their all, making The Curious Incident one of the best high school productions this writer has ever witnessed.

The set was a large wooden square on which the cast sat when they were not involved in a scene. The audience surrounded them on three sides, with only 100 seats available, and sold out, for each of the three performances.

The lighting crew did a terrific job of ending and beginning each scene with black outs, while the cast moved the prop boxes around the stage to be in the right place for each new scene.

The sounds of cars, birds, and even transistor radio static were sent through the speakers behind the audience, along with other appropriate back ground sounds.

Many scenes also had pictures cast up on the walls behind the fourth side, such as math problems on which Christopher was working, or a backdrop of London, or the train station.

Senior Katie Seaman portraying Christopher’s understanding teacher, Siobhan, in the special school he attends, was excellent in her role.

Director Zuver stated that even though Katie had the words of Christopher’s journal in front of her, she was so into the part that she was actually reciting her lines, not reading them.

Also seniors, Nolan Kuhn and Morgan Koenig, were convincing in their roles as Christopher’s parents, showing real compassion, frustration and anger as their parts evolved throughout the play.

The rest of the cast more than stepped up, as well, making this production a sight to behold. Except for Mrs. Shears, played by Sophomore Alexis Nieves (the wife of the man who ran off with Christopher’s mother), the rest of the actors played two parts.

Roger Shears and the Station Policeman were played by Sophomore Ryan Spiess; Mrs. Alexander (a friendly old neighbor) and Information by Sophomore Mara Simmons;  Reverend Peters and Uncle Terry by Freshman Raiden Rezabek; Policeman and Mr. Wise by Freshman Aiden Moore; Mrs. Gascoyne and London Policewoman by Senior Lexi Alspaugh; Woman on Train and Shopkeeper by Junior Sarah Knight; Duty Sergeant and Woman behind counter by Freshman McKenzie Rigg; Drunk 1 and Punk Girl by Senior Rachel Spiess; Drunk 2 and Policewoman by Sophomore Katelan Nagel; Posh Woman and Station Guard by Freshman Gracie Hardin; No. 40 and Lady in Street by Freshman Batoul Bazzi; and Woman with Socks and Mrs. Thompson by Junior Cordelia Stubblefield.  Last but not least was Jefferson the Rat playing Christopher’s pet rat, Toby. There was also an adorable tiny puppy who was brought on stage by Christopher’s father, for the last scene.

With eight weeks of 3 1/2 hour practices for three nights a week, plus all the work they did on their own to learn lines and develop their characters, this cast unquestionably rose to the task and produced a high quality experience for the three hundred people who were blessed to see it. High kudos to everyone involved for a tremendous job well done!