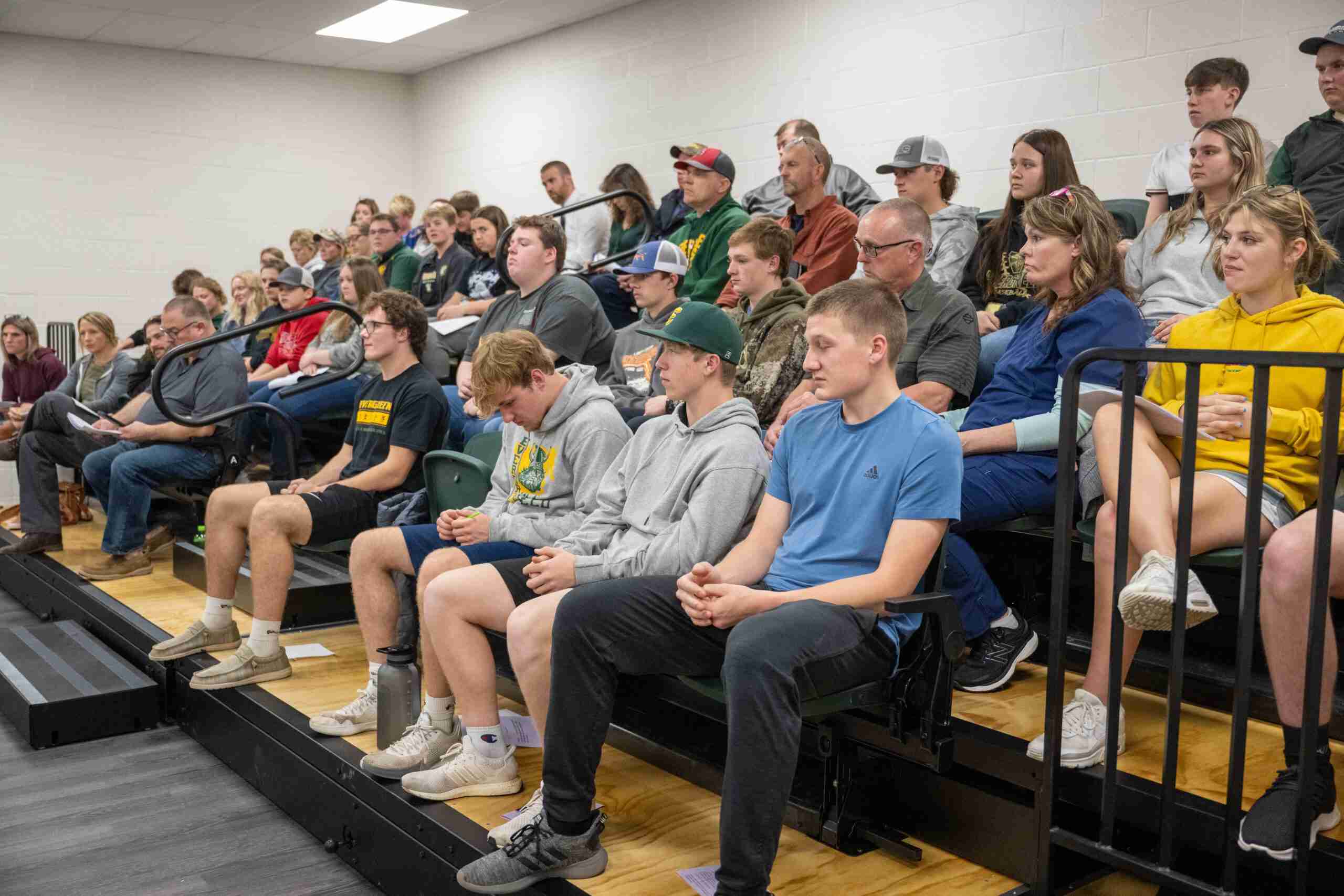 PUBLIC FORUM … Students and parents sit during the public forum initiated by the Evergreen School Board to discuss possible changes to the school’s drug policy. (PHOTO BY JACOB KESSLER, STAFF)

On Wednesday, April 13th the Evergreen Board of Education held a special meeting which worked as a public forum for community members to ask questions and discuss changes to the boards proposed changes to the school drug policy.

Numerous parents and students spoke at the meeting with many of them voicing concerns about privacy, the issue of randomly being selected and on-site testing.

Comments from visitors were mostly mixed with some speaking negatively about the change and others speaking more about changes they believe need to the added to the policy if it is to be implemented.

Several students spoke with some citing issues of fairness and questioning the idea of the tests being random and why the changes are needed. On more than one occasion students, both at the meeting and after, spoke about being chosen numerous times in a row for the random drug screens despite a previous negative test.

The explanation given by the board is that a list is sent to the school from the testing agency with 40 names who were randomly chosen. The first 20 students who are in the building are who are chosen first.

It was stated by Board Member Nora Kiefer that the reason for the board looking into changing the drug policy was due to a parent asking for the policy to be looked at and revised.

Parents also brought up the issue of privacy with one stating that Great Lakes Biomedical, which is the company the school uses to conduct the drug testing, does not have to abide by HIPAA law.

It was stated that Fulton County Health Center offers drug testing and that, due to them being considered a hospital they should be able to protect students’ information more through HIPAA.

However, due to drug tests not being protected by HIPAA, this does not apply with FCHC either. Company policy dictates how the information is protected.

Board members discussed with visitors that all activities will be included in the new drug testing policy.

This will provide an opportunity to have 90%-95% of the school’s student policy eligible for random drug tests at some point throughout the year. The number is that high due to Evergreen’s large percentage of students who participate in activities.

The board then discussed what takes place when a positive test is found. With the first offense, the student will have to sit down with a parent and counselor to determine if an assessment is necessary by an outside agency.

The student also has to complete a substance abuse / cessation education program. For the second offense, the parent, student and counselor will meet again.

The student also has to make an appointment with a certified chemical dependency counselor and follow the assessment. Currently, the third offense does not offer anything else for the student.

Board member Kiefer stated that this will be revisited before a vote takes place.

These positive tests are only collected by those who compete in competitive sports. The idea is to possibly find other positive tests in order to give support to students who may be suffering from substance abuse.

The number of tests will stay the same per month regardless of the increased list due to trying to keep costs where they stand now at around $2,000 a year.

Results for the Fulton County Partners for Health for 2021 show that Evergreen went up in 2021 for students who have reported being offered, sold, or given drugs on school property.

This number stood at 12% in 2021. 2% of students reported being a current smoker, 4% report currently using prescription drugs not prescribed to them, and 2% reported that they currently use marijuana which equates to around 8 students in grades 6-12.

Surveys were also sent out to students from school administrators which also showed issues with alcohol and drug use in the school according to board member Kiefer.

The policy is still under review and changes are being made from the board.

It was stated that more public forums will be held to continue discussion regarding the proposed changes with a vote possibly taking place before the next school year so that it is able to be included in the school handbooks.