WILLIAMS COUNTY FAIR BOARD: Fair Board Approves “Stair Climb For 9/11” Event At Fairgrounds 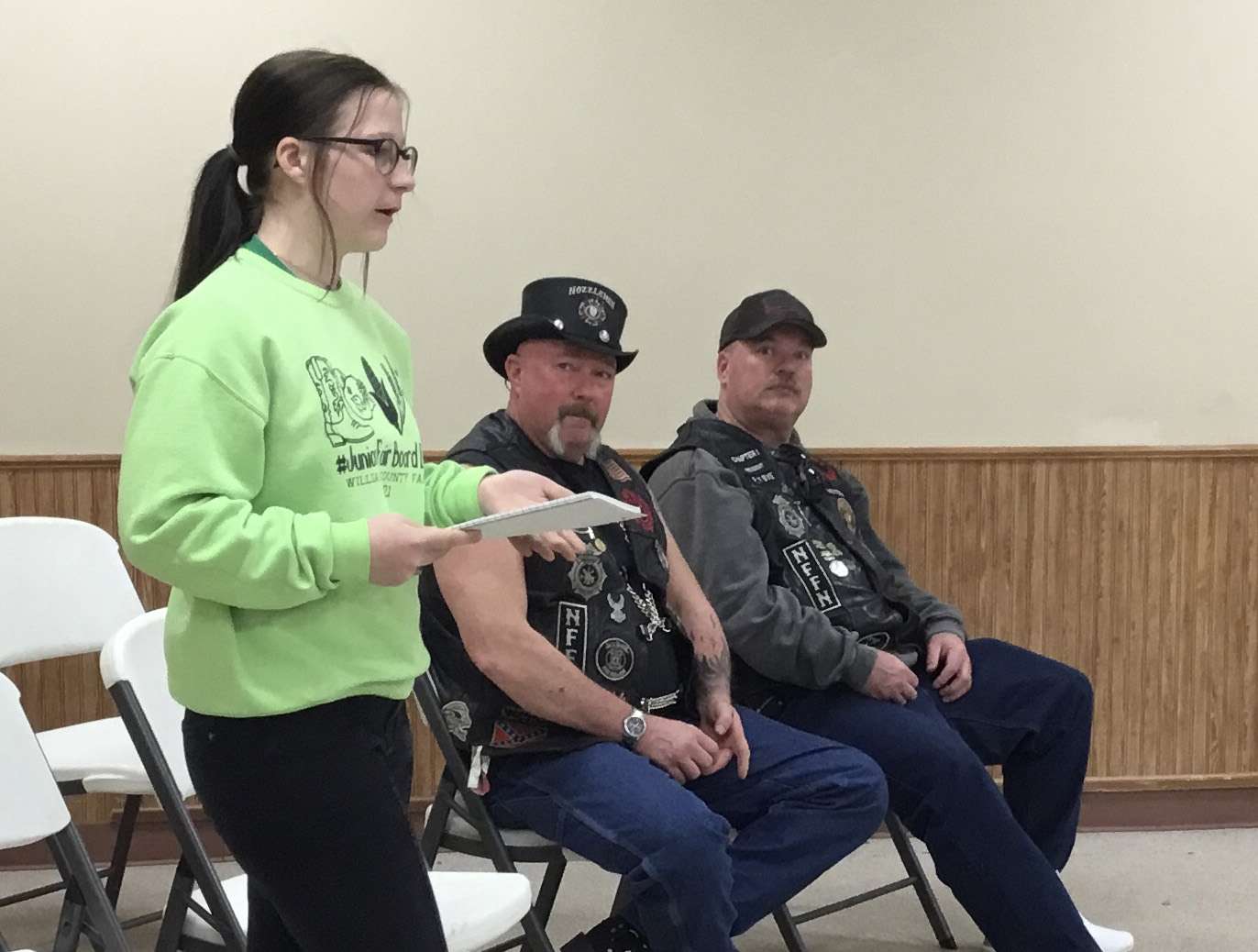 REQUESTS FOR THE FLOOR … Reese Hand, VP of the Williams County Junior Fair Board was present at the April 21, 2022 Fair Board meeting, to request a date for “Youth Night”. Also, there to address the board, asking for a date for the “Staircase Climb for 9/11”, were Nozzelmen Dan Ankney and John Chapin. (PHOTO BY REBECCA MILLER, STAFF)

The April 21, 2022 Fair Board meeting began with eleven Directors in attendance, two excused and one absent. President Pam Goll gave the call to order and led the Pledge of Allegiance.

Two groups were represented, to speak with the Fair Board, with Reese Hand, VP for the Junior Fairboard requesting that the Board approve Fun Night to be held on Labor Day Weekend.

As the Fair has been shortened they can’t fit it into the Fair week so asked for it to be held on Saturday, Labor Day Weekend, during the day.

Following a short discussion it was agreed that she should come back when they have more details for the Fun Night plans.

The next representatives were Dan Ankney and John Chapin for Nozzelmen, requesting the Saturday after the Fair, which would be September 17, 2022 for the “Stair Climb for 9/11.” Later in the meeting, the board voted to approve that date with no fee charged for the use of the Stadium and track for that event.

Minutes, with corrections, for the March meeting were approved as well as the Treasurer’s report.

In Committee Reports: Dave Page reported that two bands have been booked, with one for Sunday and one for Tuesday, they are still working on the Gillette project, they are revisiting the price of lights for the grandstand; Pam Goll said that the Truck Pull is all set for 4 o’clock on Sunday, state line pullers are running it again; Tobi Fenicle said waterline from 107 to the Maintenance barn is going to be replaced, all mowers are up and ready to mow, requested that everyone PLEASE stop putting things at the Horse Barn as he has it all cleaned up and it needs to stay clean as that is the first thing people see when they drive in (he threatened to throw away anything he finds there from now on that is not supposed to be there) “If you get something out of a barn, put it back.”; DanielleWortkoetter reported that Allstar Athletics will be participating again this year for the Cheer Competition.

In Old Business, Goll reported that the update on the 4-H building is set to begin in May and that they will have the Tractor Use Rules at the next meeting.

Fenicle spoke about the Summer Swap Meet and Car Show which is scheduled to be held on June 24 & 25, 2022. Car Show, Bike Show, Swap Meet will all be held on Saturday morning.

Kannel and Malone will be in charge of the Car Show. There is a DJ and a singer lined up for Friday night on the infield. Some concessions will be set up. He is working on getting the beer permit set up, and the board voted to approve him going ahead with that.

There will be a burn out competition on Saturday afternoon. “Skinny Wrench” out of Pioneer will handle the Bike Show. It was agreed to have the campground open that weekend and to charge $50 for a Bundle of two nights plus two wristbands for two adults.

To get on the infield, there will be a charge of $5 per day, or $8 for both days, for anyone not participating in the shows. Ten and under will be free. The board approved $5000 to cover the Swap Meet costs, so he has enough and can give back whatever is not used.

In New Business, Goll informed committee leaders that their Committee Budgets are due by May 10th. She presented a Cleaning Crew Contract proposal and the Board voted to approve the hiring of “Made for You Two” for 1. $4650 for bathroom cleaning during the fair, 2. $500 per cleaning of the Grandstand area, and 3. $400 each time for the cleaning of the Gillette Building during the year as needed.

Contracts for ARS to do the trash pickup at the cost of $6400 during the fair, and for Vogel Electric to handle all electricity again.

With no other business, the board went into Executive Session to discuss Security.

Action was taken, with a vote to deactivate the keys for entrance to the winter storage buildings and the only ones with access are the committee who takes care of it and President and VP. They adjourned around 8:30.