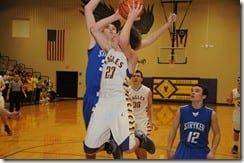 CONFRONTATION AT THE NET …Stryker’s Tanner Clingaman goes up to try to deny a layup from Skylar Lantz of Fayette.

FAYETTE: January 31, 2014 – Back in December, the Fayette Eagles learned a painful lesson in The Cage at Stryker…contain the twin towers, Parker Ruffer and Tanner Clingaman, or lose. On that night, Ruffer and Clingaman each hit for double digits to plant a 46-38 loss on the Eagles.

Since that time, Ruffer has been on a tear, and Clingaman has provided interior support to put the Panther Pack into the thick of the BBC hunt with a 4-1 conference mark. On January 31, the Eagles welcomed Stryker into their house with a hint of BBC revenge in the air. The plan to contain the twin towers worked to a tee as Tyler Cox, Koby Biddix, Wade Burkholder and Tristen Bates held the Panther power pair to a combined 16 points, giving the Eagles the ability to attain and maintain a cruising altitude that the Panthers simply could not overcome in a 44-29 loss…their lowest offensive output of the campaign to date.

Dean Beamont canned a first period trey and Clingaman added a deuce, but the snarling Fayette defense limited Ruffer to a pair of free throws. Meanwhile, Biddix splashed two of his three treys in the opening stanza, and combined with a bucket from Cox and pair of field goals each from Chandler Sanford and Jerad Seiler, the Eagles jumped out to an early lead that would not be threatened the remainder of the game. So tough was the speed of the Eagles’ defense, that Ruffer would not hit his first field goal until the third period. He got off plenty of shots, but every one was well defended by at least one Purple and Gold shadow.

Biddix led all scorers with 11 points for the 7-5 / 3-2 Eagles, with Seiler finishing with 10 points and Sanford 9. Cox added 4 points, Burkholder and Bates had 3 points apiece, and Grant Schaffner and Skylar Lantz each had 2 points.

Ruffer was held far below his average at 10 points, and Clingaman and Beamont each finished with 6 for the 5-9 / 3-2 Panthers. Brandon Woolace and Austin Grisier closed out the Stryker scoring with 3 points apiece.

Timothy Kays can be reached at tim@villagereporter.com