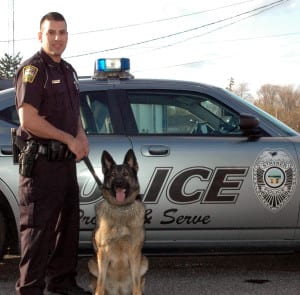 WAITING TO SERVE – Reagan hopes to soon be serving the Stryker Police Department alongside her handler, Sergeant Steve Mendez.

Reagan, a five and a half year old German Shepherd who formerly served as a Border Patrol K9 for two years before rendering her services to the Swanton Police Department, hopes to soon be serving the Stryker Police Department alongside her handler, Sergeant Steve Mendez.

Mendez acquired Reagan after Reagan’s former handler and Mendez’s friend, Marc Cerda, left the Swanton Police Department to serve with a bomb dog overseas. Cerda’s only request upon giving Reagan to Mendez was that he try to keep Reagan working. Mendez has gone out of his way to do just that.

Because the Stryker Police Department has faced the same budget cuts that seem to be looming everywhere, there simply was not enough funding available for a specially trained dog such as Reagan as programs involving such dogs can easily cost anywhere between $10,000 and $15,000 for departments to begin with on their own.

Reagan, however, is coming to Stryker at no cost. Cerda gave Reagan and all of her personal equipment to Mendez for free.

Then, with no funds available from the department to complete the training that he would need to handle Reagan, Mendez did some research and completed his training at Lone Wolf Kennels, located in the Sylvania area, at his own expense. Mendez is now certified by the Ohio Peace Officer Training Academy (OPOTA) to handle the specially trained K9. Reagan awaits her own certification by OPOTA, who does all police certifications and sets training standards, on May 9.

Training and certification, however, is just part of the expense a department can face in having a K9 unit. Others have stepped in to help Mendez meet these expenses. Cornerstone Critters, who also donates food for the Williams County Sherriff’s Department K9s, has agreed to donate food for Reagan as well. Kevlar for K9s out of Colorado has supplied Reagan with her own bullet proof vest. David Michael LLC has also come through with the offer to provide the K9 related decals needed for Stryker’s police car at no cost.

Also being provided for Reagan is her own seat to be placed within the car. Because the Stryker Police Department has only one car and due to the expense of the equipment, including a cage, that many K9 units have in the car, Reagan is instead receiving a specially designed hard seat for K9s from the Woodville Police Department, who has offered Mendez the seat at no cost.

Mendez says that he doesn’t need all of the “bells and whistles” that can sometimes come with a K9 unit. The seat, far less costly and elaborate than the cage, will suit Reagan fine and he, himself, will just continue to wear the same uniform that he always has.

As Reagan’s OPOTA certification is scheduled to take place in May, the recommendation to put her into service will most likely be put before the Stryker Village Council in June. To have veterinarian expenses also covered would be an important step for Reagan to be approved for service. While Reagan has been deemed in good health and Mendez’s own training allows him to provide Reagan with part of her care on his own, future veterinarian expenses are still in consideration of the Council, who must approve Reagan’s use by the department.

Mendez and Reagan are also looking for facilities to continue to work on training and exercises that must be continuously worked on in order to keep both the K9 and her handler at a level where they can perform their duties at their peak performance level. Ideal locations would include factories, schools, or other real-life environments where Reagan might be used.

Reagan is considered a dual-purpose dog. She is trained for narcotics, tracking, handler protection, and will bite and hold upon command. These are services that, after Reagan is approved for service, would be available for the Stryker Police Department as well as any area department calling and requesting her assistance. At her age, Reagan has approximately three to four years where she can offer these services. Afterwards it is Mendez’s intent to keep her but another dog will come in to replace her at work. That dog, like Reagan, will come at no cost as Mendez has secured a deal with Lone Wolf Kennels for another dog after Reagan has done all she can. Reagan doesn’t really ask for much in return for the use of her skills. All she really wants in return for all of her hard work is her favorite toy.

Anyone who wishes to help Reagan continue working and receiving her special reward for the use of her skills, whether it be by veterinarian care, facilities for training, or other donations, can contact either Police Chief Steven Schlosser or Sergeant Steve Mendez at the Stryker Police Department.