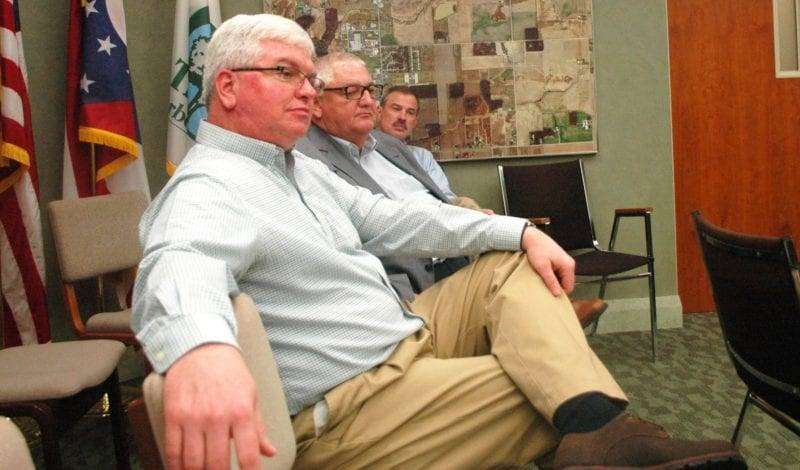 The Fulton County Board of Commissioners paid a visit to the Archbold Village Council April 3.

The commissioners say they like to visit the various councils across the councils at least once a year. The commissioners talked about some issues that have been percolating in the county, but did not address the ongoing dispute between Archbold and German Township over firefighting service and equipment.

Board President Jeff Rupp did address how the county is dealing with billing for EMS runs. This was prompted by a report from a Wauseon-based newspaper in which Wauseon Fire Chief Rick Sluder made accusations of incompetence against the EMS and the county board.
The county collects the money submitted by Medicare or an insurance company for the run, Rupp said in an interview April 6. The county sends the responding agency $100 for each run.

The problems began when the county board allowed an outside agency to collect the money. The county worker assigned to this task quit soon afterward.
The new company, AIM, stepped in and began processing claims. That created a backlog. The company wanted to address the backlog, but Rupp said the board told them to keep up on the current bills and then work on the backlog. That prompted Sluder to make his comments, Rupp said. The county has not been able to make its payments to the local entities, Rupp said.

The commissioners are working to find the best solution to servicing water customers in Fulton County, Rupp said. This could involve becoming a part of a Water District with Toledo and other communities or create a new system using Wauseon and Archbold as the main water sources, he said.
The new location for the Archbold impound lot will be at next to the Waste Water Treatment Plant.

In other news:
• The council approved Resolution 2017-23 and declaring an emergency to accept F & M Bank proposal to provide a one-year note for $800,000. The note will mature April 13, 2018, and come with a 1.69 percent interest rate. The proceeds from the sale and combined with $200,000 from other sources will be used to pay off a $1 million note bought in November 2016. The money is to help fund the waste water plant.

• Council approved a motion finalizing an insurance claim – Utility Committee minutes March 20. The motion stems from a sewer backup that resulted in claims of $1,404 and $125. The village had cleared the line nine previously and was not at fault; the committee felt the village had a moral obligation to pay.

• Council approved a motion waiving a hearing to object to renewal of liquor permit.

• The village is still lagging on its income tax collection for the year. The village stands at minus 22 percent this year over last, Administrator Donna Dettling said. All the changes reflect differences in how Archbold collects the taxes, Dettling said.

The next Council meeting will be 7 p.m. Monday, April 17.