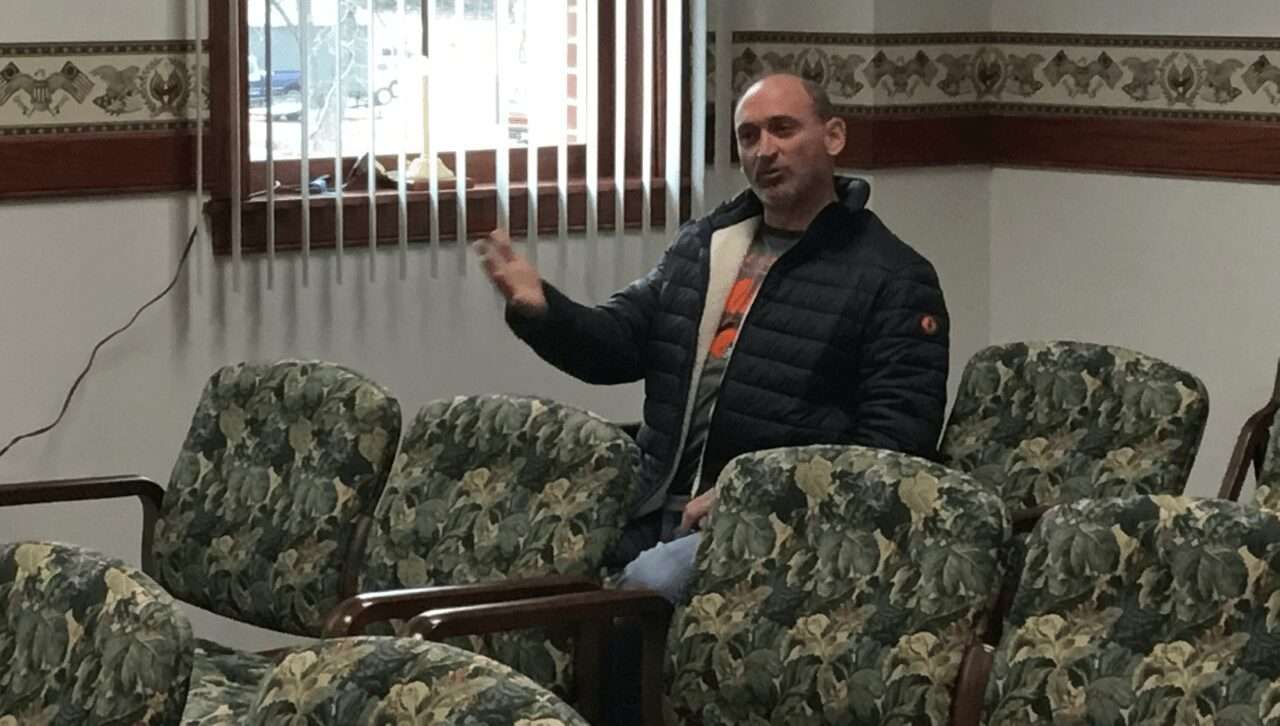 ADAMHS BOARD UPDATE … Rob Giesige, CEO for the Four County ADAMhs Board, shared information with the Fulton County Commissioners at the November 24, 2020 Commissioners meeting. On a light note, Commissioner Bill Rufenacht teased him for not being in his regular suit and tie, to which Giesige explained it wasn’t safe when he was going to be shredding documents for the rest of the day, to be wearing a tie. (PHOTO BY REBECCA MILLER, STAFF)

The Thursday, November 19, 2020 Fulton County Commissioners meeting was spent approving a number of items.  Given approval were:

More resolutions were approved at the Tuesday, November 24, 2020 meeting, but two presentations were also given for the Commissioners.  Rob Giesige, CEO  of Four County ADAMhs (Alcohol, Drug Addiction and Mental health services) Board addressed the commissioners first, saying he wanted to meet them and let them know what the ADAMhs Board does. “We basically get federal dollars and contract that to services we need.”

He explained that First Call for Help merged with Family Services of NW Ohio and then the latter has closed so he is busy shredding all the files from those so that they are not out.

Giesige mentioned that he has applied for a Grant to help fight the Opioid Crisis in the four county area.

He stated that there  is an “uptick” in calls for/from children and teens who are struggling with depression, cutting and talk of suicide, he believes because of this extended time of the pandemic. He explained to the commissioners that the four county area does not have anything for crisis help for young people with these issues. Guidance counselors are calling from the schools asking for help for students. “We need to get some inpatient help,” he said. “One kid spent 100 hours in the Wauseon ER and one spent 60 hours in the Montpelier ER before they could get them sent somewhere for help.”  The two places where they can be sent is Toledo Children’s Hospital and UTMC, or Parkview in Ft. Wayne.  There is nothing available in the four county area for long term assistance.  They actually sent one boy to Columbus.

Commissioner Bill Rufenacht asked how often this happens and Giesige said he may only need a bed ten times over the course of a year. Rufenacht also asked if it has been considered to use two of the four beds at  Juvenile Detention as they “are rarely full” and they have security already. It was explained that the judges are concerned that it might make it worse for the child when they realize where they have been placed. Also, JDC has a policy not to accept suicidal kids.

In another area covered by the ADAMhs Board, New Home Development Company provides housing in the four county area, with about 40 house and some apartments in Bryan and Defiance. They help people who have substance abuse or alcohol issues. They help them get treatment and find a job. Most of the people can live on their own but need some agency assistance. He stated that there is a huge waiting list for these.  There is the issue of needing more housing for this also. There is a Capital Plan and they have put in for a project for some more housing. New Home has their own board and have been very helpful.

The Commissioners heard a report from Lauren Lester, also, who is the Marketing and Communications Director for the county. Lester shared that she is planning to get these reports into a quarterly cycle starting in 2021, but this report covered July – October update. The “Commissioners Corner” has had someone do a talk every month and Commissioner Rupp suggested that she interview Bill Rufenacht as an exit interview for him for the December interview, as Rufenacht has resigned and his seat will be taken by the newly elected Joe Short.  Lester said that would be great and would give them two for December.

She reported on a long list of things that have been accomplished in the past four months, including having a button put on the Commissioners webpage where it takes people directly to the Health Department for Covid Updates.  She also accomplished what was needed for the Board of Elections to be in compliance with their website.  She has toured the Senior Centers and CCNO to have a better idea of their needs, and has created a  YouTube Channel for Fulton County Ohio Commissioners, which has it’s first video posted.  The Fulton County Airport’s Plane-palooza is scheduled for August 6-8, 2021 and she created the logo for it. This one will be very family friendly with more than just an Auction.

Lester also informed the commissioners that she is continuing to contact and hold conversations with a long list of people, as the Public Information Officer (PIO), usually by phone as meeting in person has been slow.  She responded to a question about her relationship with EMA and she is acting as their PIO. She has let them know she is available but has not done anything specific for them, yet. She has not been called yet for any emergencies.

Lauren said that through COVID she has gotten well connected with the staff at the Health Department and feels like they are working well together and communicating well. Jon Rupp asked her to sit down with Joe Short sometime in the next month and go over her report so he has an idea what she does.

In Regular business during the November 24 meeting, the commissioners approved:

County offices were scheduled to be closed for November 26 and 27.  With no further business the meeting was adjourned.