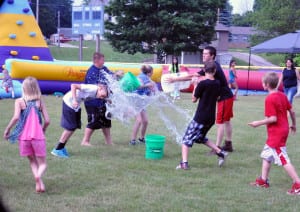 Once again following its annual tradition, the village of Pioneer celebrated another year with its Germanfest festival on June 12 and 13.

Those who attended any of the festivities of the weekend saw firsthand the spirit and enthusiasm of the Pioneer community. From children to adults enjoying their twilight years, Germanfest produced smiling faces on all patrons present.

Kids activities were accessible on both days of the event. Several inflatables, including a bounce house, velcro wall, and climbing peak, were available to children of all ages to play with. Miniature golf and a mini-baseball/softball batting game were set up as well.

A competitive nature also presided over the events of Germanfest. The Fidler Memorial Softball Tournament was held at Mill Diamond. A cornhole tournament, put on by the North Central chapter of the Future Farmers of America, took place as well.

The yearly parade once again swept through downtown Pioneer. A large portion of the area fire engines, including vehicles from Northwest Township, Montpelier, and Bryan Fire Departments came one after another, blaring their horns for anyone within a twenty mile radius to hear. Several Williams County Queens, including reigning Miss Pioneer and Fair Queen Kirby Miller and Miss Williams County Hannah Herman rolled through Pioneer sitting atop fancy sports cars. Grand Marshall for the parade was Connie Salisbury.

Saturday afternoon, Crommer Park served as the center of all Germanfest activities. Polka Band Happy Times took to the stage for a four hour show as the crowd partook in the beer garden set up in front of it. The band was free spirited and easy going, relating to their audience as they performed.

Perhaps the most anticipated portion of this year’s Germanfest was the Pie in the Face contest, pitting Mayor Ed Kidston against Pioneer Police Chief Timothy Livengood. A vote-by-donation determined which lucky contestant would “win ” the honor of receiving a pie in the face, with the proceeds going toward the Pioneer Youth Football program.

Kidston was declared the winner, despite his attempts to declare an executive order to reopen the voting, with Livengood receiving the honor of delivering the pie to his boss’ face. Prepared for the moment, however, Kidston forced his employee to wear a blindfold he had on hand before Livengood could throw the pie. This precaution was made in vain, however, as the police chief made a direct hit on Kidston.

At the last moment, it was announced that Livengood would receive a consolation prize of “being cleaned” by the dumping of cold water over his head by Kidston. Naturally, Livengood was elated by the news.

Following such excitement were the youthful performers of the Head Over Heels Gymnastics troop. The girls worked their way through a straight-line obstacle course, flipping and spring-boarding their way over blocks and ramps.

Rocking Crommer Park well into the night was the Free Beer Band. The group played on the stage from 8:00 to midnight to wrap up the park’s Germanfest activities.
Finally, the evening concluded with an evening at the Mayor’s house, beginning around 9:15 P.M. Kidston invited the community to a Movie with the Mayor. A family friendly affair, the cinematic showing for the night was the ever popular Big Hero Six.

With another Germanfest reaching its conclusion, the celebration could only be categorized as a success. With the help of several area businesses, such as Arcelor Mittal, Meyers Brothers Trucking, and American Steel, the village of Pioneer was able to culminate another year of existence with a festive effort.