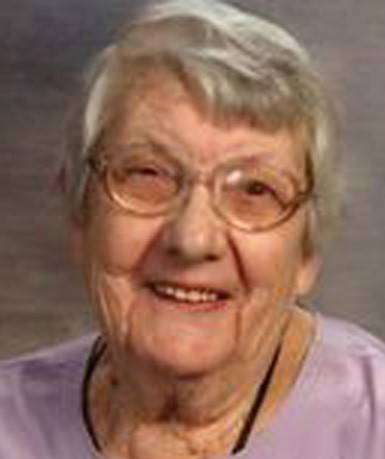 Gladys Maxine Donson, 99, of Bryan, passed away peacefully in her sleep in the comfort of her life-long home the morning of Saturday, December 21, 2019.

The last six months were increasingly difficult for Gladys and due to the amazing, loving care of her caregivers, Becky Rhodes, Scarlet Smith, and Marilyn Kline, Gladys was able to remain at home.

Gladys was born on July 30, 1920, in Mark Township, Defiance County, Ohio, the only child of Roy and Carrie (Polter) Walters. In 1942, she married Joseph Levinson in Colorado.

After his death in 1952, she married Leslie Donson in 1953, from who she was divorced. Gladys began her schooling at the District #9 Spindler School in Mark Township.

In 1927, she moved with her parents to a farm in Washington Township, where she spent the majority of her life. There, she attended the District #4 Chickasaw School, the one-room schoolhouse formerly located at the corner of State Route 249 and U.S. 127, and later the Ney High School from which she graduated with a class of fourteen in 1938.

She furthered her education at Miami University, Oxford, Ohio studying to be a Dietitian. She graduated with a B.A. Degree from therein 1942. She later took additional education courses at Bowling Green State University and St. Francis College to obtain her teaching license.

While attending BGSU, Gladys was employed at The Ohio Art Company in Bryan, Ohio. By attending school in one-room schoolhouses, Gladys became interested in researching and finding the locations of these important pieces of history.

She assisted with the research of Defiance County One-Room Schoolhouses and loved discussing them any chance she had.

Gladys devoted her mid-life to teaching in the Central Local School District from where she retired in 1986. She taught fourth grade in the old Mark Center School building for nineteen years previous to retirement.

As a teacher, she pressed upon her students the Little House On the Prairie books by Laura Ingalls Wilder. She later read these books to her grandchildren and great-grandchildren.

Upon retirement, Gladys began her new career as an avid genealogist and local history researcher, an interest she gained from listening to her grandparents’ and parents’ stories.

In her research, Gladys was not only able to uncover her own family history, but also help local families find their ancestors. Intrigued by any type of history, Gladys enjoyed helping others find family information as much as she did locating her own.

She was a frequent visitor to the Ft. Wayne Library to research genealogy for herself or anyone else who wanted to ride along. In her lifetime, Gladys visited all but four states and many countries while on vacations and in search of more history.

Some of the countries Gladys visited were specifically to get records of her ancestors from their homeland. On her hunt for local history, Gladys researched local ghost towns and contributed to the publication of Ghost Towns of Northwest Ohio.

Never losing sight of her passion for teaching, Gladys shared her knowledge and desire of history by instructing genealogy classes in Bryan and Defiance for many years, and she often lectured at local genealogy meetings and events.

In her research, Gladys discovered that she was a descendant of many early settlers in Ohio and therefore became a member of First Families of Ohio, and First Families of Defiance, Williams, Paulding, and Wood Counties.

Throughout Gladys’s research, she found many family members that served in some of the earliest wars America encountered. Following her findings, she became a charter member of Joel Frost Chapter Daughters of the American Revolution and filled many offices including regent.

She was also an organizing member of the Captain George Athey Chapter Colonial Dames of the Seventeenth Century and of the Jacob Stemple Chapter The United States Daughters of 1812 where she served as Chapter President and as the Ohio President.

She was a fifty-year member of Asbury United Methodist Church of Williams Center where she had served as a teacher, Sunday School Superintendent and lay leader for many years.

Active in their church and faith, Gladys and her mother, Carrie, would go on service adventures to Kentucky to deliver clothing to the Red Bird Mission. In the last years of her life, she had been a member of St. John’s Lutheran Church of Sherwood, Ohio.

Adamant about family being a core value, Gladys made a strong effort to attend many of her great-grandkids’ sporting, FFA, and performance events. She could always be seen sitting at the bottom of the bleachers cheering on her team!

When Gladys was not researching genealogy, attending a community event or great-grandkids’ball-game or performance, she loved talking with others and sharing her memories.

Living a long, happy life, Gladys often recalled the world tragedies and advancements she had lived to see and tell. Life through the Great Depression, World War ll, the creation of automobiles, the discovery of life-saving vaccines, and technology are stories she loved telling.

Gladys’s favorite “food invention” was the walking taco, but she never forgot about her “oldies but goodies”; ice cream, chicken wings, and fried green tomatoes.

Her earliest childhood memory was “when she was around the age of two, sitting in the potato patch and saw the first airplane she had ever seen ‘showing off’ in the sky right above her, almost as if she could reach out and touch it.”

Walking to school, playing with her pet pig, Frosty, and soaking in every story and memory her family members ever told her were just some of the favorite childhood memories Gladys loved to share. The best piece of advice she could give was one she received from her Grandma Minnie Polter, “Love everyone the best that you can.”

Visitation for Gladys will take place on Monday, December 30, 2019, at Krill Funeral Home of Bryan, Ohio, 860 W. Mulberry Street, from 2-8 pm. Funeral Services will be held on Tuesday, December 31, 2019 beginning at 10 am at St. John Lutheran Church of Sherwood, Ohio, 9088 Openlander Road, with a visitation held an hour prior to the service. The burial will take place at the Lost Creek Cemetery.

Memorials in Gladys’s memory may be made to the St. John Lutheran Church of Sherwood, Ohio or to the Defiance Area Foundation for Fairview Schools (613 W. Third Street, Defiance, OH. Make checks payable to DAF with FV Schools Fund on the memo line).

“To forget one’s ancestors is to be a brook without a source, a tree without a root.”
– Chinese Proverb.