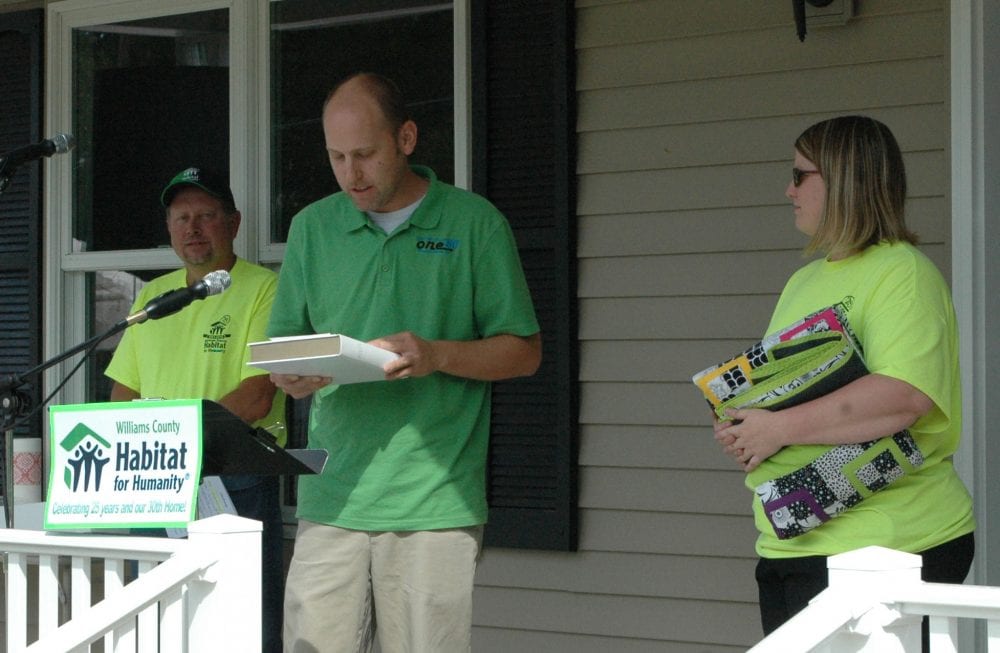 Kayle Vasko got the keys to her new house and several dozen friends and neighbors showed up to celebrate.

The Williams County Habitat For Humanity celebrated its 25th year and 30th build with a dedication of Vasko’s home at 305 Maple. The home was the first such enterprise HFH has undertaken in Pioneer.

The investment of 30 homes in Williams County amounts to $2 million in material, professional services and taxes, HFH Board President Steve Williams said.

Vasko is a single mother of two boys (Lincoln and Isaac) who put in long hours herself (known as sweat equity) in building the home. Around 500 people assisted in the construction in some way, shape or form.

“Can you believe what God and love can do,” Peters said in the home’s kitchen. “This community has totally come together and pulled this off.

The build finished a little bit ahead of schedule, Peters said. That was likely due to beginning construction earlier in the year and not having any bad weather get in the way, she said.

“We’ve had so many people step up and be a part of this,” Peters said. “From the planning, the committees have grown and we are hoping to grow them again.”

Paslay is a big supporter of Habitat and when he learned of the dedication, asked if he could perform.

“He said have you got anything going on,” Peters said of the phone call she got from Paslay. “We arranged the dedication to the day of the concert (Sept. 14 at the Williams County Fair). And then things just started flowing together.”

Paslay called this an “Angel Visit.” He comes out to Habitat home dedications, Boys and Girls Clubs, police and fire stations and hospices.

“We haven’t gone to a sheriff’s department yet, dang it,” Paslay said, with members of the county sheriff standing around him. “Y’all are hidden; Y’all are actually always out on the road.

“It’s just a simple way for thanking them for creating miracles. I believe God gives us miracles, but I believe he gives us each other to help each other out.”

The dedication in Pioneer was the largest Paslay said he’s been a part of. He’s gone to bigger towns where eight people show up.

“We got lucky,” Paslay said. “It’s very cool. It’s special to see something like this.

Pam Smith presented Vasko with quilt made by Sew’ers of Hope from Lake View.

Following the presentation of keys from Joe Pilarski of the Building Committee and Marc Tingle, site contractor, Vasko offered some comments on the experience of seeing all the people come together to make this possible.

She talked of her gaining knowledge of the organization and deciding to apply for a home.

“I never expected to get the phone call from Mary Ann that I had been selected to be the partner family for Pioneer village,” Vasko said. “It has been an amazing experience.

“I want to thank anyone who has helped in any way. We are very blessed to a part of this community.”

Habitat will likely build its next home next year in Bryan, but has the lot to north of the Vasko home and will likely return in a few years, Peters said. The Pioneer home is less than 1,100 square feet and has been assessed at $76,000.

Vasko will get a mortgage based on that amount to pay off, Peters said.

This was the first time the agency used this particular floor plan. The local chapter got it from a chapter in South Carolina so it met with HFH approval. For more details, check out the Williams County Habitat for Humanity Facebook page.

Following the festivities, Vasko said she was overwhelmed about all the help she received and was eager to move in next week.

Her boys have their rooms picked out and now are coming up with their own designs, she said.

Williams said the turnout for the dedication showed how special the Pioneer experience was. A normal dedication is about 10-15 people, but including the band, Williams pegged the turnout at nearly 200.

“Today was spectacular,” Williams said. “To see the people from the community and from other areas come was marvelous.

Pioneer has been a special place ever since Habitat announced it was going to build there, Williams said. The community and local government was all about “How can we help.”